5 Ways Art Can Improve Your Health﻿

From painting to visiting museums, cultural engagement carries a host of physical, mental and psychological benefits for older adults﻿ 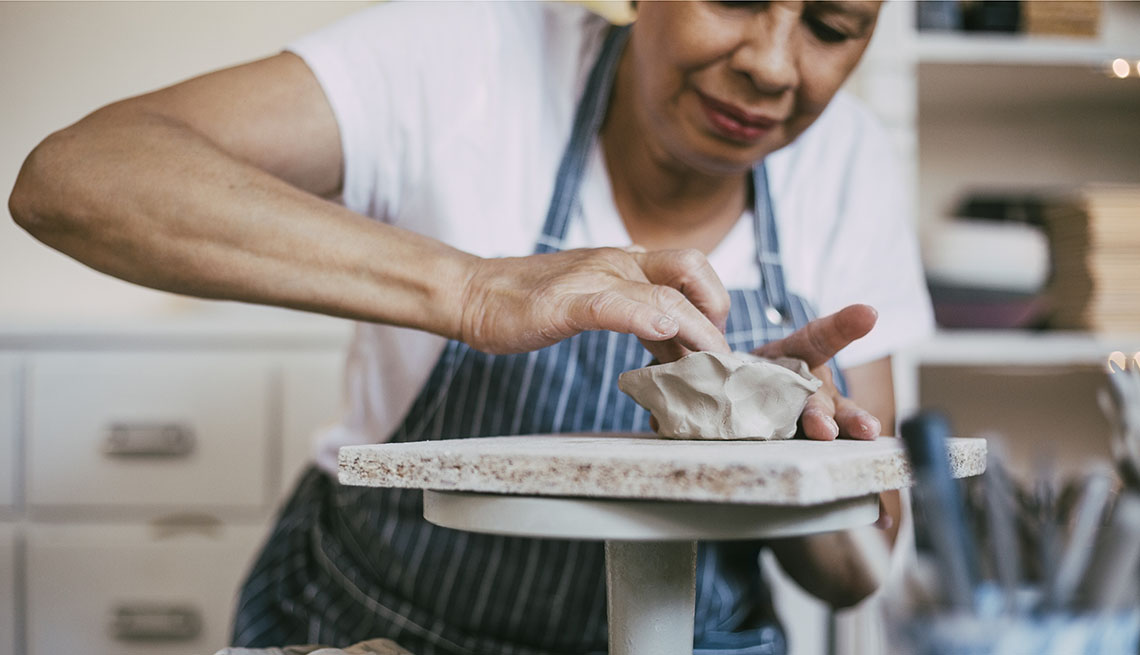 When patients first arrive for art therapy, Meera Rastogi invariably hears their misgivings about their lack of talent. “They all say, ‘I’m horrible. It’s going to look ridiculous,’ ” said Rastogi, psychology professor and coordinator of the University of Cincinnati’s Pre-﻿Art ﻿Therapy Certificate ﻿Program.

Rastogi assures patients repeatedly that therapy carries no pressure to create museum-worthy masterpieces. Her favorite quote preaches that being bad at something is a prerequisite to becoming good at it. Moreover, the goal of art therapy is to improve one’s health.

In recent years, research has uncovered a range of health and wellness benefits for older adults who engage with arts, according to Rastogi and other experts. In the past decade, scholarly understanding has deepened greatly, but there is room for further elucidation, they note.

“There’s lots of evidence that taking part in a creative or arts-based program can benefit older adults in the community and in nursing homes,” said﻿ Jess Bone, a research fellow in epidemiology and statistics at University College London (UCL).

Bone and her colleagues have found that older adults who go to concerts, plays or galleries﻿; participate in community arts groups﻿; or pursue hobbies regularly show increased satisfaction with life and have a more positive mood plus a stronger belief in being able to achieve desired outcomes.

These activities, in turn, “are associated with a lower chance of developing dementia, depression, becoming frail, being lonely and premature mortality,” Bone said.

In a recent study﻿ published﻿ in Aging & Mental Health,﻿ Bone and her colleagues pored over data from more than 12,000 adults over the age of 50. When they compared community arts group participation and degrees of life satisfaction, they found that the former “could help to promote healthy aging, enabling a growing segment of the population to lead more fulfilling and satisfying lives,” they wrote.

Using what she called sophisticated demographic and socioeconomic tools, Bone and her colleagues factored in concerns that those who are already better able mentally and physically to attend arts events reap benefits, while those who are not﻿, cannot. Still, she said, participation in community arts groups was connected “to higher positive affect, life satisfaction, purpose in life and mastery.” Four years later, those who participated in the arts reported increased levels of well﻿-being. However, Bone was surprised to find that arts engagement did not, in turn, appear to decrease negative areas, such as bad moods, in this study.

A 2019 World Health Organization (WHO) report﻿ found, in part, that the arts can help “to prevent the onset of mental illness and age-related physical decline” and assist “in acute and end-of-life care.”

Writing in Nature in 2018, UCL researchers found associations between visiting exhibits or attending live performances (but not the movies) and slower cognitive function decline over the next decade among nearly 3,500 adults between ages 52 to over 90. In 2020, UCL researchers﻿ reported﻿ in Epidemiology & Community Health that the same activities were associated, over the next 12 years, with lower dementia risk among nearly 10,000 adults 50 and above.

The latter corroborated 2018 research from the same scholars, who also found in 2019 that attending exhibits or live performances (this time including movies) at least every few months was associated with less risk of frailty for older adults over the next 10 years. And in 2019, they found that engaging annually or twice annually in those activities lowered older adults’ risk of dying over the next 14 years by 14 percent. Those who participated every few months had a 31 percent lower chance of dying over the same span.

This jibes with Rastogi’s experience. When she worked with older adults with dementia in a retirement community, she was surprised how many engaged with art. When the group visited museums, some who previously had not talked at all shared memories. “They were just so stimulated,” she said.

Rastogi believes that art therapy can help older adults for two reasons: It presents a less-threatening context in which to introspect calmly﻿, and on a “nerdy, brain level,” art propels the brain into meditative, reflective states, facilitating thinking outside the box. “People move through their problems and issues faster with the art therapy,” she said.

At Cleveland Clinic, where Lisa Gallagher﻿ has been research program manager of the Arts and Medicine Institute for a dozen years, patients of all ages engage with its 7,000-object-strong art collection throughout its buildings. According to 2014 research﻿ published in Health Environments Research & Design, in a survey of 1,094 people — 67 percent of whom were over 55 — who noticed artwork at the Cleveland Clinic, a majority “had improved moods and stress levels due to the artwork, and reported that the art collection positively impacted their overall satisfaction and impression of the hospital.”

Particularly during the pandemic, virtual arts programs have alleviated loneliness among older adults, according to Gallagher. Cleveland Clinic is currently seeking National Endowment for the Arts funding to create a guided virtual tour of its arts collection for older adults. “With all the negatives that have been out there with COVID, creativity with COVID has expanded,” she said.

Gallagher echoed Rastogi’s advice for older adults who are hesitant to make art. It is more about process than product, she said, and one needn’t be an artist or musician to reap art or music therapy benefits. “We do the hard lifting on that end of it,” she said of the therapists.

In the future, Gallagher thinks research will examine exactly why and how arts engagement carries all of these health and wellness benefits.

Bone and her colleagues are also trying to understand more deeply how to bring arts engagement benefits to vulnerable populations. “This research shows that we need to work harder to make arts and cultural activities accessible to everyone, regardless of their age, background or health,” she said.﻿