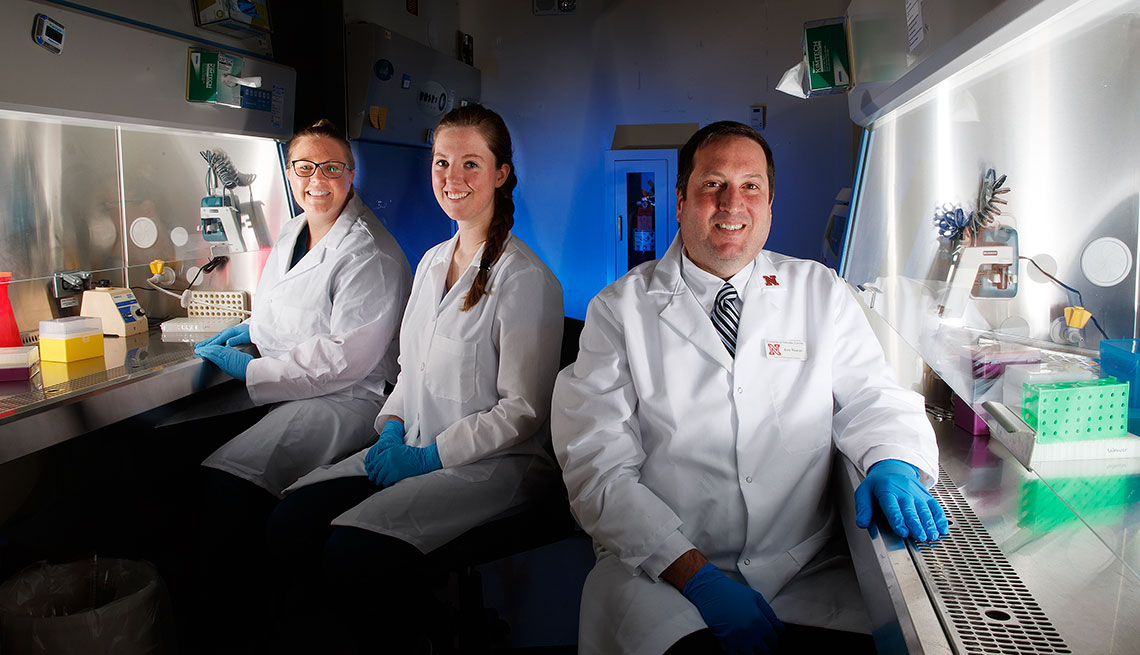 Eric Weaver, right, Brianna Bullard and Amy Lingel are part of the group at the University of Nebraska-Lincoln whose research may one day provide for a universal flu vaccine.

Results of a recently announced University of Nebraska study offer a promising new path to a flu vaccine that would provide a lifetime of influenza protection. Such a universal shot not only would spare future generations from any experience with the respiratory virus, but also would help older Americans — who suffer greater health effects from the flu but get a benefit from conventional shots that fight it.

As the basis for a more potent and longer-lasting vaccine, Eric Weaver and his team with the Nebraska Center for Virology used computer-simulated genes instead of those plucked from current flu strains. Their resulting vaccine provided enough protection to enable lab mice to survive a megadose of the flu. Mice that got the equivalent of our current flu shot — and as much of it “as you can get into a mouse” — all died.

Weaver says he thinks the success of the vaccine may be related to the new shot's genetic makeup, created after identifying the common amino-acid proteins that popped up across the genetic sequences of different influenza strains. The genes he spliced together mimic those of the original root viruses — the ones that mutated, bit by bit, into all the different strains out there today.

Why would building a vaccine around this genetic root be so important? Weaver explains that while a shot built on the genes of a single flu strain will be the best at fighting that particular strain, in practice we don't always arrive at a yearly shot that perfectly syncs with all the constantly shifting flu types out there. (As a result of this and other factors, some years' flu shots are notably less effective than others.)

And when we get a “mismatch” between the genetic makeup of a flu shot and the genetic makeup of a prevailing flu strain, Weaver's new approach — offering a broader foundation of protection — seems to work better. “This shot may not be the best vaccine, but it will provide the highest level of immunity if the vaccine is mismatched,” he says.  It could also potentially help older Americans, who suffer disproportionately in the event of a vaccine-virus mismatch.

Could there be, as others have speculated, a lifetime flu vaccination ready by 2020? Maybe, Weaver says, depending on factors like how hard influenza hits in the coming seasons and how hard the government decides to hit back. Clinical trials in humans of his own vaccine, he says, are likely five years away. In the meantime, Weaver and other experts say that other options like high-dose or adjuvanted shots, along with the relatively common quadrivalent variety, can provide broader protection from the flu for older Americans.