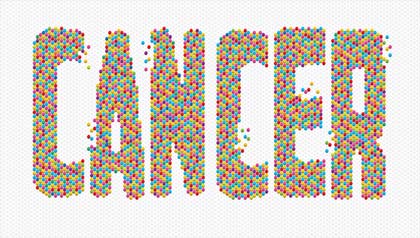 There are 12 million U.S. cancer survivors alive today. Each dot represents 3,636 survivors — color-coded to the 10 most common types of cancer

Tania Stutman's doctor was tactful but blunt: She had one year left to live. The cancer in her small bowel, he explained, was rare and untreatable. “Go home and get your affairs in order,” Stutman recalls the doctor saying. That was in 1998. But Stutman, 49 at the time, defied the odds. She survived her gastrointestinal tumor for the next three years, long enough to take part in a clinical trial of a pioneering new drug called Gleevec. Within two months, Stutman saw her tumor shrink by 50 percent. She's been taking Gleevec every day since.

See also: Major events in the history of cancer.

In this era of pink ribbons and yellow Livestrong bracelets and a proliferation of races to cure cancer, it's easy to forget that just three or four decades ago, a cancer diagnosis was likely a death sentence. In the early 1970s, the five-year survival rate for all invasive cancers was a dismal 43 percent, and the treatments — disfiguring surgery, almost unbearably toxic chemotherapy, indiscriminate radiation — were so dreadful that many patients considered them worse than the disease.

Today, the five-year survival rate for all cancers is 67 percent. Surgery, chemotherapy and radiation — still the triad of successful cancer treatment — are more precise, causing much less pain and disfigurement. But the real turning point for patients like Stutman occurred in 1971, with the signing of the National Cancer Act.

The Act provided an enormous bump in funding for the National Cancer Institute, which led to the development of dozens of federally designated cancer-research facilities nationwide. Those facilities attracted the best minds — which, in turn, launched an explosion of research into the molecular underpinnings of cancer. And that has led to novel treatments and a huge upswing in the number of cancer survivors, from just 3 million in 1971 to about 12 million in 2012.

So what makes cancer such a fierce opponent? It's smart. "Scary smart," says Richard Schilsky, M.D., section chief of hematology and oncology at University of Chicago Medicine. All cancers share the trait of pathological cell division, but beyond that, they vary as much as height and weight among the general population. Because of that, a successful treatment for, say, colon cancer won't work for lung cancer.

The reason stems from cancer's molecular origins. Cells naturally replicate, either to sustain growth or to replace cells that have died. In healthy cells, this duplication is regulated, allowing for what our bodies need and no more. In cancerous cells, mutations take place at the genetic level, prompting cells to duplicate unabated, leading either to a tumor or, in the case of blood cancers, exceedingly high white blood cell counts. Much of the cancer research over the last four decades has been in pursuit of unlocking the mystery of these mutations — what causes them and how to repair them or block their effects.

In addition to its molecular complexity, cancer presents another abstruse puzzle: heterogeneity. Most cancers have not one type of mutation but hundreds, often in many different combinations. And the same cancer can differ from patient to patient.

Next: Cancers may develop immunity to drugs over time. »

"Look under the microscope at the breast cancer of 10 women and they all look the same," says Judy Garber, M.D., president of the American Association for Cancer Research (AACR) and director of the Center for Cancer Genetics and Prevention at the Dana-Farber Cancer Institute in Boston. "Yet each will react differently. We used to think of cancer by organ. Now we must think about it as molecules in order to target the treatment specific to that person's cancer."

Most cancers have yet another means of confounding doctors: The mutated cells adapt, particularly under the stress of treatment, and they often adapt differently in any two people.

While drugs like Gleevec may offer the best hope for cancer sufferers, advancements in surgery and radiation have also improved survival rates.

Despite these challenges, most researchers would agree that their understanding of cancer improved significantly in the years following the National Cancer Act.

A case in point is the drug that Stutman takes — Gleevec — which has transformed gastrointestinal stromal tumors (GIST) and another form of cancer — chronic myelogenous leukemia (CML) — from fatal illnesses into chronic ones.

The first breakthrough came in 1973, when Janet Rowley, M.D., at the University of Chicago, showed that in those with CML, chromosome 22 attaches to chromosome 9. It would be another 10 years before Dutch and American researchers discovered the full significance: The 22-9 attachment had prompted two genes to fuse. The resulting "oncogene" triggered the uncontrolled cell division of CML.

All of this was great for the textbooks. What made a difference to CML and GIST sufferers was the discovery by Brian Druker, M.D., of the Oregon Health and Science University in Portland, of a molecule that would block a protein produced by the gene, and turn off its replication switch. The cancer community had its long-sought-after magic bullet. Gleevec, the drug that emanated from Druker's research, attacked the root of the problem but left the healthy cells alone.

The FDA approved Gleevec in 2001. Since then, similar drugs have been developed for other forms of cancer, including melanoma and lung cancer. But, as Schilsky says, "These are not cures. Over time, the cancers develop new mutations or immunity to the drugs. We now have a second generation of drugs for those who are Gleevec resistant."

While drugs like Gleevec may offer the best hope for cancer sufferers, advancements in surgery and radiation have also improved survival rates. Radiation, for instance, is much more precise. Rather than blasting the tumor from all sides indiscriminately, which destroys healthy as well as diseased tissue, IMRT, or intensity-modulated radiation therapy, allows doctors to target just the tumor. "We can't eliminate side effects," says Allan Lichter, M.D., chief executive officer of the American Society of Clinical Oncology. "Radiation kills cells indiscriminately. But what we are doing better is keeping the dose to normal cells as low as possible and the dose to the bad guys as high as we can."

So where does that leave us today? Are we close to finding a cure for cancer?

Next: Researchers continue to work on discovering new drugs. »

Not quite. Cancer remains a disease too diverse and too canny to be eradicated anytime soon. But researchers are working on multiple fronts not only to discover additional drugs like Gleevec but to reduce the incidence of most forms of cancer and to improve the treatments.

Some 150 "chemoprevention" clinical trials are under way across the country, testing drugs that will reduce the incidence of cancer in high-risk populations. Tamoxifen and aloxifene, for example, target women with a high risk of breast cancer. Medicated mouthwashes also are being tested as a way to reduce the risk of oral cancer.

The mapping of the human genome, completed in 2003, has opened the door to personalized treatments for cancer, in which the molecular makeup of both the patient and the cancer dictate a specific approach. This has led, for instance, to the discovery that a mutated BRCA gene indicates a high likelihood of developing breast cancer — and that women with the mutated gene will respond best to a specific treatment protocol.

In the coming decade, stem cell research may yield new clues in diagnosis and treatment. And nanotechnology may assist with early diagnosis and more targeted delivery of drugs to cancerous cells.

For now, doctors are focusing heavily on cancer prevention. Americans have largely heeded the warning about tobacco use, and deaths from lung cancer have already begun to decline. But the American Institute for Cancer Research, which funds research into the link between a healthy lifestyle and cancer prevention, estimates that a full third of the most common cancers could be prevented by eating a diet rich in fruits and vegetables — plant-based foods are loaded with fiber, antioxidants and other cancer-fighting nutrients; exercising regularly — countless studies show a link between physical activity and the reduced risk of several cancers; and maintaining a healthy weight — supersizing seems to go hand-in-hand with cancer, though scientists aren't sure why. "The lag period might be 20 to 30 years," says Meisenberg," but behind America's obesity wave we are sure to see a cancer wave."

Indeed, between the new drugs, the improved technologies and screenings, many experts believe the time is coming when most cancers will become chronic illnesses rather than fatal ones.