For years, Joan Weissman played tennis competitively, racking up a shelf full of trophies — until she was sidelined by chronic rotator cuff and biceps pain last year. “I thought I’d never play tennis again,” says Weissman, 71, of Columbus, Ohio. Then a tennis pro at her club suggested something that sounded crazy at first — a shirt designed to ease her shoulder, arm and back pain.

Joan Weissman, 71, credits the posture shirt with allowing her to continue playing tennis.

“I was extremely skeptical,” she remembers. “I mean, cortisone shots hadn’t helped me. What was a shirt going to do?” When her physical therapist told her it might be worth a try, Weissman decided to order one.

The custom-fitted “posture” shirt she tried, manufactured by Southern California-based Alignmed Evidence Based Apparel, is made of cotton and spandex, with polyester bands strategically placed to gently pull the shoulders back and align the spine to a normal posture.

“Within a few weeks of wearing one I was feeling better than I had in months,” says Weissman. “Before, I was barely able to lift anything with my one arm. Now I’m lifting 10-pound weights and exercising again. I’m back to playing tennis.”

Weismann’s physical therapist, Erica Mullins, who works at Mount Carmel New Albany Hospital, was equally impressed. “Like a lot of people as they get older, Joanie walked with her head forward and her shoulders rounded,” says Mullins, and that kind of posture can cause inflammation of the shoulder or rotator cuff problems. “She’d gotten some relief with rehabilitation. But whenever she tried playing tennis again, the pain came back. The posture shirt really made it possible for her to play again.”

Mullins now recommends the shirt to some of her clients. “I’ll have younger people wear the shirt during rehab to correct their posture. Once their symptoms resolve, they usually don’t need it any longer. For the older population, I recommend wearing it most of the time, especially when they’re doing a sport or activity.”

Next: How much does the posture shirt cost? »

Alignmed’s posture shirt is one of several lines of therapeutic clothing on the market now — shirts, bras, tank tops and tights designed to improve posture, relieve joint pain and even relieve orthopedic problems like rotator cuff injuries. Tim Brown of Newport Beach, Calif., a chiropractor and former medical director for professional volleyball and surfing organizations, has developed a line of IntelliSkin shirts, which also employ elastic bands to gently pull shoulders and back into a more natural posture. Brian McKeon, M.D., an orthopedic surgeon who specializes in shoulder repair at New England Baptist Hospital in Boston, has taken a different tack. His Posture-Tek shirt, marketed by Perseus Athletics in Boston, contains an electronic sensor that detects when wearers begin to slouch and then vibrates, reminding them to stand up straighter. By providing “instant biofeedback,” he says, the shirt retrains the wearer to adopt a healthier posture. 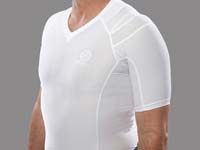 Most garments cost around $100. Many come in a variety of styles and colors. They can be worn as T-shirts, under other clothing or on their own.

All of these products are being promoted as a way not only to improve posture but also to help with many ills associated with poor posture, from rotator cuff pain to neck pain. “Poor posture doesn’t just affect your shoulders or back,” says Benjamin Rubin, M.D., an orthopedic surgeon in Orange County, Calif., who serves as medical director for IntelliSkin. “It affects breathing, digestion, circulation. Constipation, neck and shoulder pain, breathing problems are all linked to poor posture.”

The principle behind therapeutic posture shirts may sound simple. But proponents claim that wearing these garments can make lasting improvements in the alignment of muscle and bone and even change how the brain controls movement in the upper body.

“We see lots of people who suffer from shoulder problems related to an imbalance in the 18 muscles that control the shoulder blade, or scapula,” says orthopedic surgeon Craig Morgan, M.D., codirector of the Morgan Kalman Clinic in Delaware and a clinical professor at the University of Pennsylvania, who consulted with Alignmed in the development of the posture shirt. “Overhead athletes like pitchers, volleyball players, tennis players and swimmers are especially prone to asymmetric scapula syndrome. But it’s also something we see in people who are sedentary or who sit in front of computer screens for a large percentage of the day.”

Over time, sensory receptors under the skin, which tell the brain how bones and muscles are positioned, may get out of whack. “Even though you think you’re sitting or standing up straight, you’re not,” says Morgan. By correcting posture, he contends, the Alignmed shirt retrains the brain to position the bones and muscles of the shoulders and back in a way that allows them to move more efficiently.

Next: Posture shirt eases pain in some athletes. »

Studies using X-rays show that the posture shirt, by pulling shoulders into proper alignment, repositions the shoulder blade, opening up more space to allow it to move normally, says Mike Decker, a bioengineering researcher at the University of Denver, who conducted the studies under contract with Alignmed. Decker recently tested the shirts with 100 people who work at desk jobs in Colorado Springs. “Almost as soon as our subjects began wearing the shirts, we measured a 3.5 percent increase in lung volume, which may be a result of improved posture,” says Decker. “Over the month-long study, lung volume continued to improve.” Decker is currently reviewing data from the study to see if other measures, such as hand grip, improved.

Morgan, who serves as a sports medicine consultant with the Kansas City Royals, has been testing the posture shirt on elite athletes who experience performance problems. “In pitchers, for instance, we’ve been able to get a 15 to 18 percent increase in the power generated by a pitch when athletes wear the shirt,” he says. He suspects that the shirt could also help other athletes, including golfers, although studies haven’t been done.

McKeon, developer of the Posture-Tek shirt, has conducted studies showing that it can ease shoulder and back pain. He is currently running a study of people with neck pain at New England Baptist. Brown also has been testing his IntelliSkin shirt with researchers at the Andrews Institute of Orthopaedics and Sports Medicine in Pensacola. Fla., where studies with professional pitchers show that it eases pain and improves performance.

It’s all about movement

But people who aren’t especially active may stand to benefit most. Sedentary lifestyles and obesity in the U.S. have led to an epidemic of movement disorders, experts say, causing joint pain, muscle weakness and restricted range of movement. Developers of therapeutic clothing are quick to acknowledge that the best remedy is exercise. “Movement is king,” says Brown. “The more you get up and move, the less pain and stiffness you’ll feel.”  And of course you don’t need a $100 shirt to stand up straighter. All you have to do is concentrate on expanding your chest and pinching your shoulder blades together and down.

But focusing on good posture takes work. Posture shirts help by gently reminding you to sit up straighter when you begin to slouch. Along the way, they help balance opposing muscles groups, making it easier to stand up straighter.

Therapeutic garments do have drawbacks. Shirts that use elastic bands to pull shoulders and spine into a more natural posture have to fit very snugly. They can be uncomfortable in hot weather and impractical for people who are very overweight. People with arthritis may have difficulty slipping into the garments. The Posture-Tek shirt, which uses a vibrating sensor, doesn’t have to fit as snugly, but it does require batteries. And though many people report feeling better after wearing posture shirts, therapeutic garments aren’t likely to be a cure-all for everyone, or for every kind of back or shoulder pain.

Even a little improvement, however, can mean a lot for people with chronic back or shoulder problems. “My daughter saw an article about the posture shirt, and it looked like something that might help me,” says Polly Quain, 80, who had extensive spinal fusion surgery to treat arthritis before she tried the Alignmed shirt.  “I’ve been going to physical therapy for about a year, relying on the shirt and my exercises.” She still experiences pain and weakness in her arms, she says. “But when I’m wearing the shirt, I do feel more upright and stronger.”

Ben Hailey, 67, works full time at a job that involves attending trade shows, where he’s often on his feet all day.  “I’ve had back and shoulder problems ever since 1980, when I had back surgery,” says Hailey, who lives in Madison, Miss. “After two or three days at a trade show, I’d hurt in every part of my body.”  A year ago he started wearing the Alignmed posture shirt under his dress shirt. “What a difference it made,” he says. “My shoulders are more erect. My whole body shape has changed. I’m having a lot less pain and stiffness. What can I say? I feel 10 years younger.”

Posture shirts are just the latest example of apparel designed to help improve health problems. Others include:

Compression stockings
By gently applying uniform pressure, compression hosiery decreases swelling from excess fluid accumulation in the legs. Compression stockings are often recommended for varicose veins. Mayo Clinic vascular surgeon Peter Gloviczki, M.D., says, “The latest findings show that they can be as effective as surgery for healing venous ulcers, which occur when veins in the legs don’t return blood to the heart normally.”

Prescription footwear
“Prescription shoes that help prevent ulcers are critically important for many people with diabetes,” says Kathleen Satterfield, associate professor of podiatry at Western University of Health Sciences in Pomona, Calif., and president of the American College of Foot & Ankle Orthopedics & Medicine. Custom-fitted shoes with special insoles also can help relieve pain and other problems related to flat feet, unusually high arches, plantar fasciitis (inflammation of the bottom of the foot) and bunions.

Skin-protective garments
Studies show that clothing made with a specially treated form of silk, called DermaSilk, can reduce irritation and prevent bacterial infections in people with atopic dermatitis, or chronic inflammation of the skin. For people who are out in the sun a lot, clothing with a rated sun-protection factor can help prevent burning and lower risk of skin cancer.

Smart workout clothes
New lines of “smart” clothing are being designed with electronic sensors built into the fabric. One of the first to hit the market: a workout shirt and sports bra equipped with monitors that instantly record heart rate and transmit the information to a compatible wristwatch or workout machine. For more information, check out Numetrex online.