Three years after Christine McCleary’s father died, she started noticing changes in her mom, Stella. A typically active woman who always had lots of friends, Stella started skipping church services, which was out of character for her. She stopped wearing makeup and didn’t always remember to launder her clothes.

Not only that, Stella, 86, began spending more and more time alone in her apartment and often couldn’t remember what day of the week it was. McCleary was no longer sure that her mom, who lived thousands of miles away, was remembering to eat regular meals. 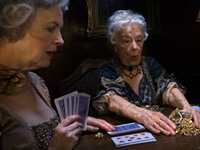 “We knew that things were going downhill,” says McCleary, 56, but the final straw came during a frantic phone call. “She thought my father was there, and he’d been dead at the time for three years. That made us say, hey, she can’t be living on her own anymore.”

So Stella moved from her longtime home near Pittsburgh to a senior residence in Reno, Nev., close to McCleary and her husband. Stella went from having maybe two social interactions a week to living in a building with more than 200 of her peers. Within a month she was applying blush and wearing jewelry. She started playing bridge every week and walking three miles a day.

Her conversations became animated again. “It was like the clock was turned back four years,” says McCleary’s husband Larry, 59. “You could tell she enjoyed getting up in the morning.”

New research suggests that Stella’s turnaround may have been integrally tied to her level of social activity and engagement. Many scientists now believe that social interaction is key to maintaining good mental health and warding off diseases like dementia and Alzheimer’s. Many recent studies document the positive effects of social interaction. Although researchers are not certain what happens in the brain to produce the positive effects seen among the more socially engaged, it appears clear that close relationships and large social networks have a beneficial impact on memory and cognitive function as people age.

In a study of 2,249 California women published in the July American Journal of Public Health, researchers reported that older women who maintained large social networks reduced their risk of dementia and delayed or prevented cognitive impairment.

The results showed that women with the larger social networks were 26 percent less likely to develop dementia than those with smaller social networks. And women who had daily contact with friends and family cut their risk of dementia by almost half.

“If you stay connected, you have a better shot,” says Valerie Crooks, clinical trials administrative director at Southern California Kaiser Permanente Medical Group and lead author of the study. “Whenever we have even the most basic exchange, we have to think about how to respond, and that stimulates the brain. There are people who are outliers, who have two very close relationships and are fine cognitively. But people who have three or more relationships tend to do better.”

Crooks and her colleagues suggest that one reason for these findings may be that social networks facilitate healthy behaviors — like joining a walking group, tennis team or bowling league.

A number of observational studies have shown that exercise reduces or delays the onset of pathological changes in the brain that lead to cognitive impairment. And the first clinical trial showing that physical exercise may improve cognitive function among those who suffer mild impairment was published in the Journal of the American Medical Association in September. Exercise, particularly along with social interaction, is believed to stimulate the formation of brain synapses, enhance blood flow in the brain and increase the formation of nerve cells.

Next: Why does social interaction make a difference? >>

“It’s important to act engaged in your environment, be it through learning, be it through social interaction, be it through exercise,” says Denise Park, a psychologist and director of the Productive Aging Laboratory at the Center for Brain Health at the University of Texas, Dallas. “I think what we’ll find out is that what’s bad is sitting home alone in a quiet room watching television.”

In one study on the impact of stimulating activities and social engagement on the brain, Park found that mental exercises, such as games, puzzles or problems that challenge the brain, were important to maintaining cognitive function. Park and her lab team are beginning a four-year study of 400 people over age 60 who will learn new skills, such as quilting or photography, while researchers examine the impact of skill acquisition on brain function.

Park hypothesizes that social interaction, like mental exercises and learning, may limit the amount of time that the aging brain can remain unfocused, in a daydream-like state. Her theory is that older people have more difficulty switching between daydreaming and focused attention to important details. So the more time the aging brain spends mentally stimulated and socially engaged, the less switching is necessary, and the easier it is to perform the daily tasks necessary for independent living.

By age 80, however, even the most socially engaged among us are likely to have some changes in the structures inside our brains, says David Bennett, M.D., a neurologist and director of the Rush University Alzheimer’s Disease Center in Chicago. “But some people with those changes will have memory loss,” he says, “and some won’t.”

Bennett and his colleagues did a study of people whose brains had large numbers of plaques and tangles — changes in nerve cells that are hallmarks of Alzheimer’s. Some patients with those markers developed traditional symptoms of the disease, such as memory loss and dementia, while others did not. Why the difference? It turns out that in those people with larger social networks, the changes of Alzheimer’s are much less likely to result in memory loss than in those with smaller social networks.

“Through a variety of activities you do during your life, your brain becomes more efficient. If you have a disease that’s destroying your [thought-processing] networks, the guy with the more efficient network is going to be better off,” says Bennett.

In another study at Rush, researchers followed about 800 people, all about age 80, for four years. The participants had no signs of dementia at the beginning of the study, but some described themselves as lonely and tested positive on a “loneliness scale.” During the study, 76 people developed Alzheimer’s-like dementia. People with the highest scores on the loneliness scale had more than twice the risk of developing dementia as those with more social connections who had scored lower.

However, when autopsies were performed on the 90 people who died during the study, no link was found between loneliness and the amount of plaques and tangles in their brains. Bennett says this suggests that loneliness is somehow connected to memory loss but not necessarily to Alzheimer’s. Some researchers think that elevated stress hormones may have caused the dementia and hastened aging of the brain tissues and structures.

Whatever the process is that allows social interaction to protect the aging brain — and scientists are only beginning to understand it — the McClearys believe it worked wonders for Stella, who lived in the Reno facility for two years. “I am convinced that had she continued to live alone in her previous apartment, she would not have improved the way she did,” says her daughter, Christine McCleary. “I’m just sorry my dad never lived there too, because I think he would have benefited from it and loved it.”

Michelle Diament is a freelance writer based in Memphis.