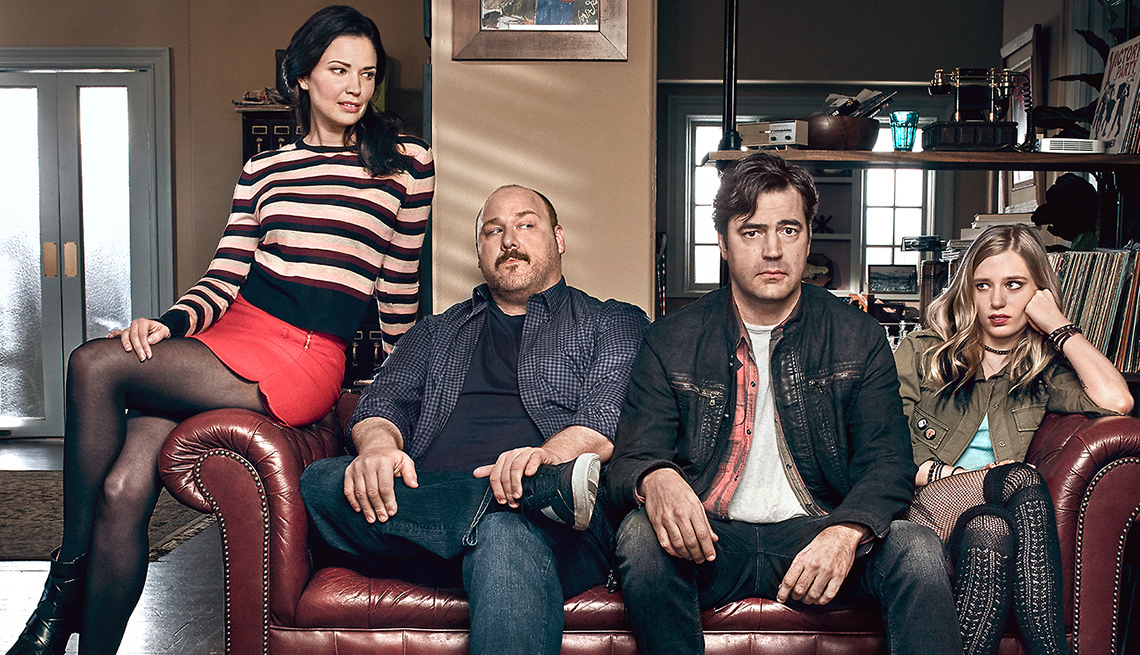 Ron Livingston plays Sam Loudermilk, a recovering alcoholic who is unapologetically uncensored and manages to rub everyone in his life the wrong way.
Courtesy AT&T Audience Network
By

Where to Watch: DirecTV and AT&T Audience Network U-verse app

Loudermilk is important for three reasons. It’s a perfect lead role for Ron Livingston, 50, whose huge, askew eyebrows and deadpan look helped make Office Space, Band of Brothers, Swingers, and Sex and the City great. He plays Sam Loudermilk, a recovering alcoholic rock critic in Seattle with an attitude so bad he called his book Negative Creep (after Kurt Cobain’s tune), and he insults every Seattleite he meets, like the bearded hipsters he dubs “time-traveling lumberjacks of the Confederacy.”

As an ex-Seattle rock critic who bought lattes daily from Pearl Jam when they were baristas and interviewed Cobain, his family, pals and drug dealer (now a sober author very like Loudermilk), I say he nails the role. He seems like a nicer version of the real Seattle rock critic who admitted reviewing a concert during a total alcoholic blackout preventing all memory of anything, yet stubbornly defended the excellence of the review.

Exuberantly poor people skills fail to prevent Loudermilk from running an addicts’ therapy group, which meets in a coffee shop that sometimes feels like Bob Newhart’s psychiatrist’s office. He lives with his secretly relapsing AA sponsor (Will Sasso) and a stony, nose-ringed girl (Anja Savcic) they try to cure. Livingston could stage one heck of a rap battle with John Cusack's High Fidelity character.

Second, the show combines the virtues of TV and movies. Creators Bobby Mort (The Colbert Report) and Peter Farrelly, 60 (There’s Something About Mary) make it an ongoing story with interesting twists and characters you grow to know, but you can also watch any single episode without feeling lost. It’s darker than most half-hour scripted TV  comedies,  but much funnier than addiction is, and closer to the silliness found in Doug Pray’s Seattle grunge documentary Hype!, just reissued on its 20th anniversary. Loudermilk shares some DNA from grunge-era hits Reality Bites  (only smarter) and Cameron Crowe’s Singles (only more focused).

Third and most significant: Besides being crudely irreverent, Mort and Farrelly have a lot of heart. Loudermilk is both badly behaved and lovable, and the show has compassion for its satirical targets. Farrelly’s nephew died of an overdose; his comedy razzes addicts without trivializing addiction. Loudermilk is part of Farrelly’s growth into  social-issues  drama as well as comedy: His upcoming film Green Book is about The Negro Motorist’s Green Book, the 1936-1966 publication that told black travelers where to visit safely in the South.

But despite its serious side, Loudermilk is mainly for laughing out loud. “You think I don’t know misery and pain? I was married for eight years!” says Loudermilk. We feel his pain. But it’s funny.