‘We Are the World’ 35th Anniversary Video Remix

In an industry known for disposable pop tunes, “We Are the World” made a world of difference.

On April 13, 1985, “We Are the World” appeared at the top of the Billboard chart as the fastest-selling American pop single in history. It wasn't just another massive hit. The all-star pop anthem fulfilled its promise to “lend a hand to life."

In one year, the song raised $44.5 million for famine relief in Africa. In the 35 years since its release, the iconic charity song has collected more than $80 million and continues to pull in about $500,000 a year to benefit USA for Africa. It set a precedent for a generation of similar fundraising music projects and demonstrated music's power to raise awareness, inspire change and even bring spoiled hotshot pop stars together in humble harmony. 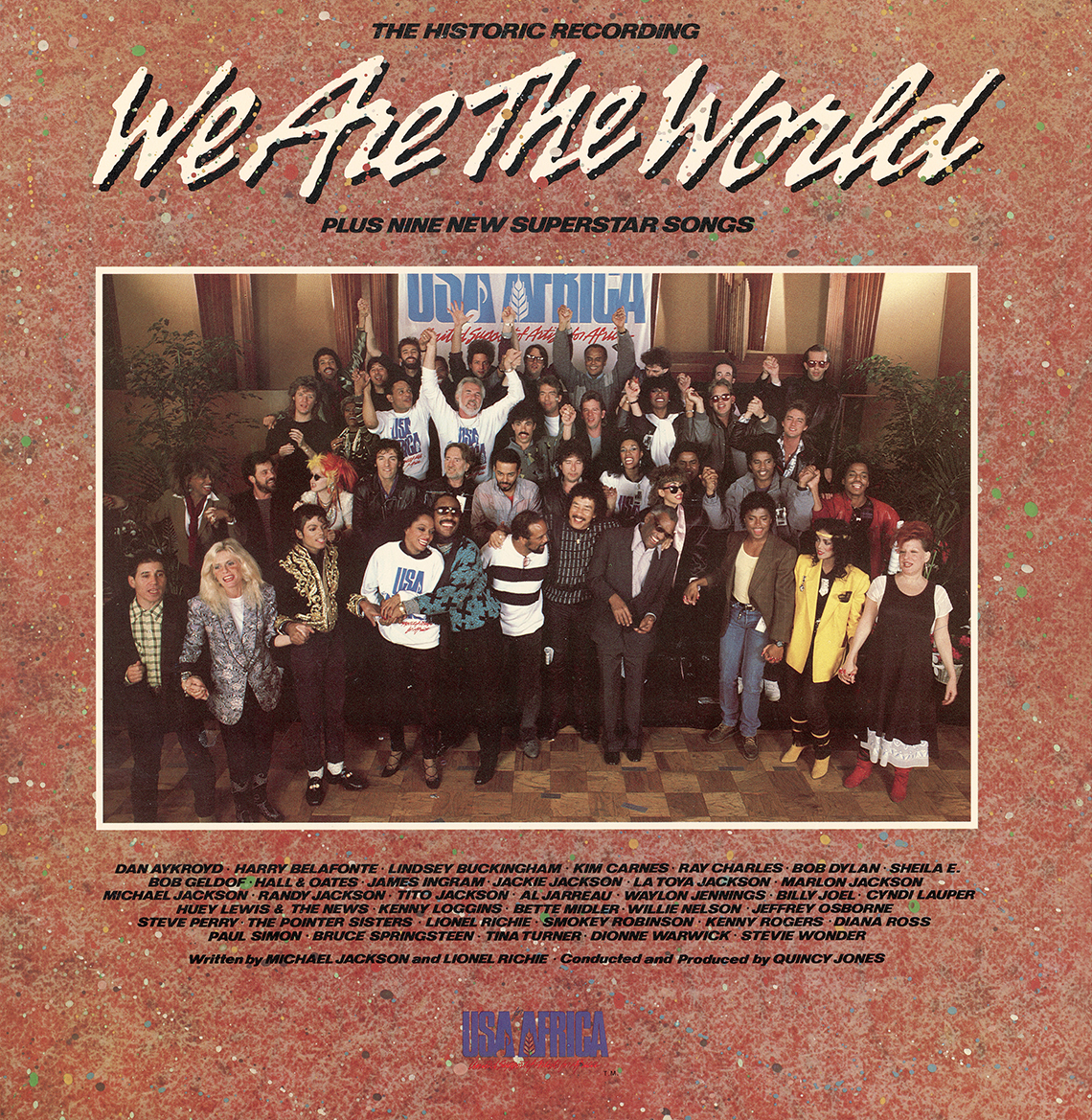 The front cover of the 'We Are the World' record album. The sleeve features a group photograph of the contributing performers.

To mark the 35th anniversary, an official video remix, incorporating footage from performances at Live Aid and the 1986 American Music Awards, has been released. Lionel Richie, the song's cowriter, is advocating a fresh version for the coronavirus crisis. Ten years ago, a second “We Are the World” was recorded to aid victims of the earthquake in Haiti.

"We Are the World” itself was a sequel of sorts. Irish singer Bob Geldof's Band Aid, an ensemble of top British and Irish musicians, released famine-relief single “Do They Know It's Christmas?” in late 1984. That inspired singer/activist Harry Belafonte to approach music manager Ken Kragen with the idea of a similar U.S. effort featuring black artists. Kragen roped in clients Lionel Richie and Kenny Rogers. They lured Quincy Jones, who brought in Michael Jackson, and the project snowballed.

All 45 piled into A&M Studios in Los Angeles on Jan. 28, 1985, right after the American Music Awards aired live. Producer Quincy Jones posted a sign at the entrance: “Check your egos at the door.” The marathon recording session stretched from 10:30 p.m. until 8 a.m., with the chorus taped first so that artists wouldn't slip out after recording solos.

The song was released on March 7, and the initial run of 800,000 copies sold out in three days. The album arrived April 23. Organized by disc jockeys in Georgia and Utah, an international broadcast of the song took place at 10:50 a.m. ET on April 5, when more than 8,000 radio stations played the song simultaneously. 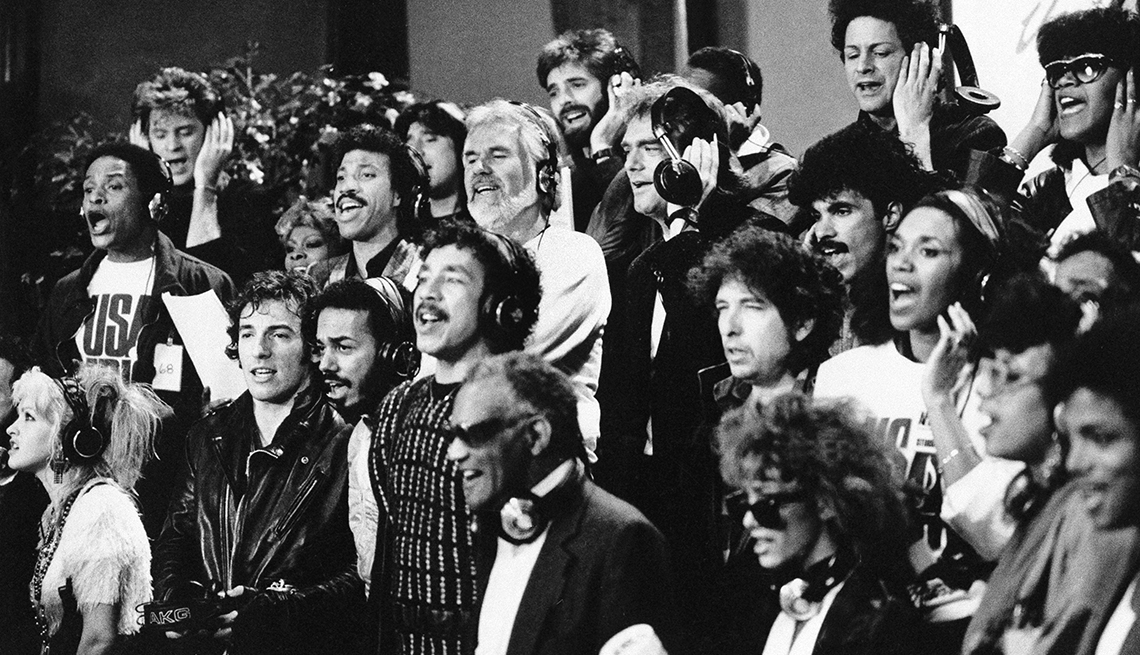 Some of the 45 music artists recording "We Are the World" in Los Angeles, California.

‘We Are the World’ Side Notes

Jackson says the song started with a rhythmic sound he sang to his sister Janet. In his autobiography Moonwalk, he relates this exchange. “Janet, what do you see when you hear this sound?” …"She said, ‘Dying children in Africa.” “You're right. That's what I was dictating from my soul."

Longtime friends Richie and Jackson wrote “We Are the World” at the Jackson family home in Encino, California, in the singer's bedroom. Richie was spooked by the sudden appearance of Jackson's giant pet boa constrictor. Originally the plan was for Stevie Wonder to compose the song with Jackson and Richie. But Wonder left town and didn't reappear until the day before the recording session, when he announced that he was ready to start writing the song.

Madonna and Prince were invited to participate, but neither showed up. Madonna, on the verge of her commercial breakthrough, didn't want to interrupt her tour. Prince disliked the song and wanted to play guitar rather than sing. Quincy Jones quashed the idea. Prince instead went clubbing on Sunset Strip, and Huey Lewis replaced him as a soloist. Eddie Murphy also turned down the offer to perform.

Most of the stars were ferried to the studio in limos. Springsteen drove himself in a pickup truck, parked at a supermarket down the street and walked to the site.

Cyndi Lauper's chunky earrings and bracelets clanged against the microphone, requiring multiple takes. The jewelry was gradually removed piece by piece to clean up the sound.

Smokey Robinson was slated for a solo but was called away on a family medical emergency before his part could be recorded.

In an adjacent sound stage, 500 guests, including Jane Fonda, Steve Martin, Christie Brinkley and Brooke Shields, watched the session on a large screen and were chastised by Bob Geldof for scarfing down a lavish buffet in the midst of a project addressing a famine. 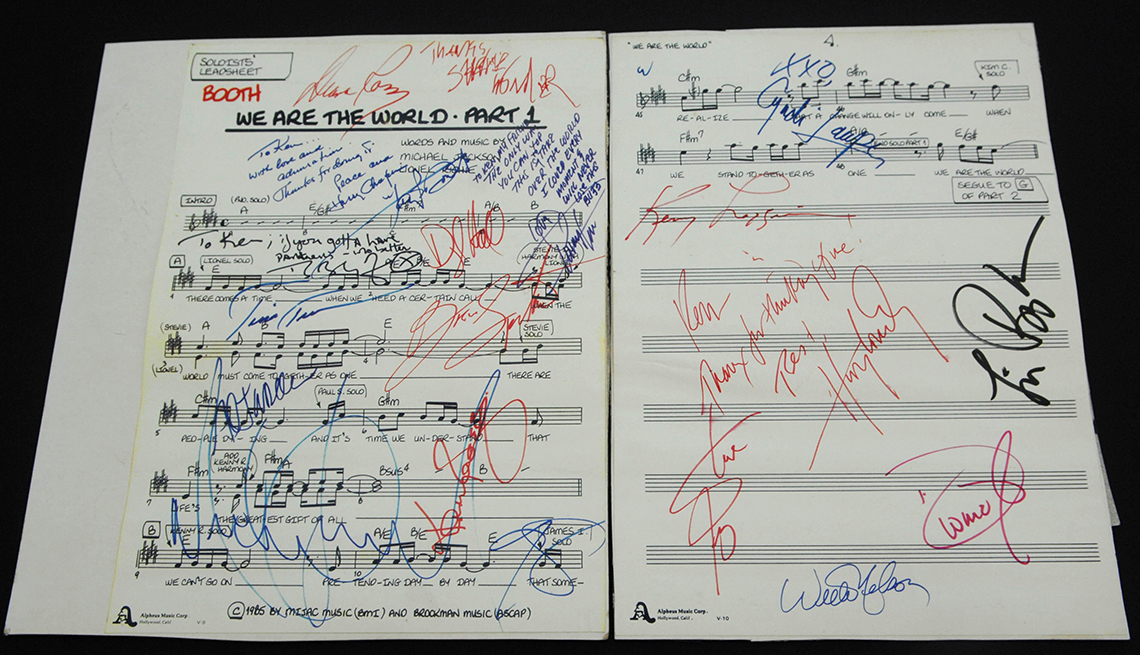 A soloist booth song sheet used for the 1985 recording of 'We Are the World', individually signed by the artists involved.

In the middle of the night, tempers flared over Jackson's line of nonsense syllables that some felt would be offensive to Africans. Wonder suggested replacing it with actual Swahili. Waylon Jennings left in a huff. The Swahili was abandoned when they realized Ethiopians don't speak Swahili.

In 2005, Billy Joel told Rolling Stone, “Most of us who were there didn't like the song, but nobody would say so. I think Cyndi Lauper leaned over to me and said, ‘It sounds like a Pepsi commercial.’ And I didn't disagree."

With sales exceeding 20 million copies, “We Are the World” is the eighth best-selling single in history and was the first single ever certified multi-platinum. It was also the first single since The Beatles’ “Let It Be” (1970) to enter Billboard's Top 5 within two weeks of its release.