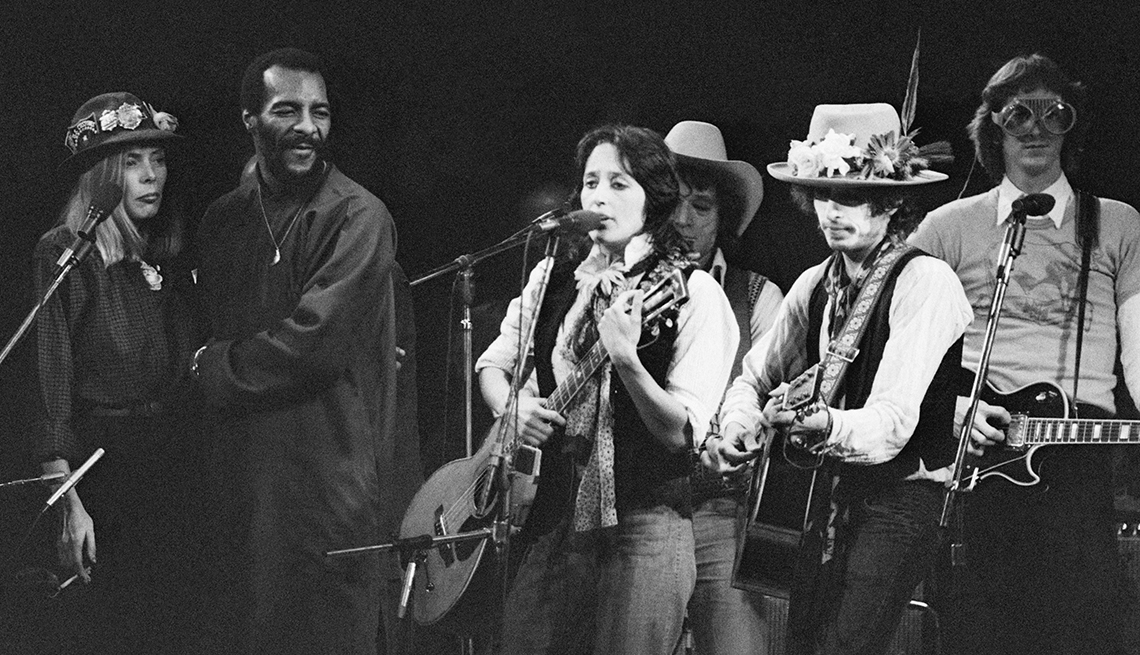 For fans who missed Bob Dylan's historic “Rolling Thunder Revue,” and most did, there's now a consolation prize.

A comprehensive box set of music from that 1975 tour is a deep dive into what critics and Dylan disciples consider among Dylan's most incandescent performances.  Bob Dylan - The Rolling Thunder Revue: The 1975 Live Recordings has 148 tracks on 14 CDs and includes all five of the complete sets that were professionally recorded, plus recently discovered tour rehearsals taped at New York's S.I.R. studios and the Seacrest Motel in Falmouth, Mass., and a full disc of rarities.

The $110 Columbia/Legacy anthology is a companion to the new film, Rolling Thunder Revue: A Bob Dylan Story by Martin Scorsese, on Netflix and in select theaters.

Dylan had recorded but not yet released the album Desire, when he assembled a guerilla gang of musicians, poets and pals to tour small and unorthodox venues in the Northeast. The shows were spontaneous, dramatic, prone to revision and lengthy, often stretching past four hours.

Crude bootlegs of the shows circulated for years. Fans got their first authorized taste when “Isis” and “Romance in Durango” surfaced on the 1985 box set Biograph. Finally, a “Rolling Thunder Revue” compilation was released in 2002 as the The Bootleg Series, Vol. 5: Bob Dylan Live 1975 with 22 performances cherry-picked from three concerts.

Casual fans may need no more than that sampler (or the newly reissued $75 three-disc vinyl version). But they would be missing a full immersion into the bewitching intensity of Dylan at his peak powers.

The new box set's first three discs of rehearsals reveal a number of treasures, from the never-completed “Patty's Gone to Laredo” and an elegiac minute-long snippet of “Gwenevere,” a song that never appeared again, to a version of “Spanish is the Loving Tongue” that underscores Dylan's consummate phrasing.

Disc 3, recorded at the Seacrest Motel, has such gems as an exquisite version of “One More Cup of Coffee (Valley Below)” and a lovely take on the Irish folk song “Easy and Slow,” which Dylan has never played on stage.

Across the five full shows that sprawl over 10 discs, we hear Dylan modify lyrics, change course and breathe new life into every song. Nothing is rote. Night after night, he ramps up the fervor in “Isis” and the indignation in “Hurricane,” his seething epic about the false conviction of boxer Rubin Carter. He and onetime paramour Joan Baez are transcendent in duets of “Blowin’ in the Wind,” “Wild Mountain Thyme,” “I Shall Be Released” and “The Water Is Wide."

The bonus disc of rarities leapfrogs from a raucous “Simple Twist of Fate” played before seniors in a mahjong parlor to a muscular version of Peter La Farge's “The Ballad of Ira Hayes” at the Tuscarora Reservation to a casual shot at Smokey Robinson's “The Tracks of My Tears.” During a rendition of “Your Cheatin’ Heart,” Dylan can be heard asking, “Where's Larry?,” a reference to wheelchair-bound Larry Kegan, a friend since childhood.

"'Easy and Slow', where did that come from?” Berkowitz says. “He does it with such unbelievable passion. And then you hear six roadies applaud. I don't know of any other time he's done that song. It's not in any of the rarities we've gone through over the years."

Assembling tapes for the Rolling Thunder box set was even more challenging than procuring footage for Scorsese's film.

"We've been looking for all these things for many years,” Berkowitz says. “The multi-track recordings of the five shows were in good shape. We were able to digitize those and mix from that. With the advent of high-resolution technology, once you copy it, it really sounds like the original tape. I love analog as much as the next person, but you've also got to save this stuff. We did everything possible to bring forth the music and the atmosphere and the excitement of the audience."

"No one ever knew those rehearsals even existed.”

Diehards are especially ecstatic about the material captured in S.I.R. studios and the Seacrest Motel.

"No one ever knew those rehearsals even existed,” Berkowitz says.

Across the set, compelling performances were included despite technical glitches or incomplete recordings.

"Sometimes they'd run out of tape or forget to record,” Berkowitz says. “It was a vérité show, and vérité recording is not always perfect. It's not supposed to be perfect. There's a special spirit to it, and you've got to stay in the spirit of what the artist was doing."