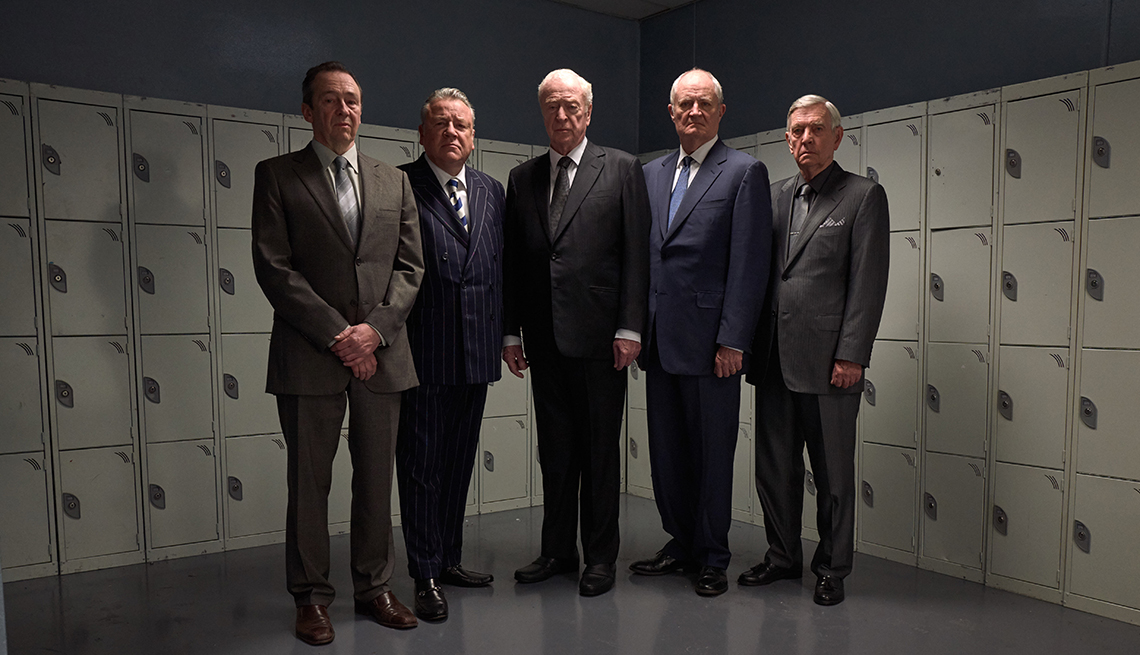 Proving the power of grownup audiences eager to see faces close to their own age onscreen, there’s been a spate of fact-based movies about criminals who declined to retire in their 70s or 80s or 90s: The Old Man & the Gun, starring AARP Movies for Grownups Awards 2019 nominee Robert Redford, 82;  The Mule, starring Clint Eastwood,  88; and now a Murderer’s Row of top British actors — Michael Caine, 85, Jim Broadbent, 69, Tom Courtenay, 81, Paul Whitehouse, 60, Michael Gambon, 78, and Ray Winstone, 61 — in King of Thieves, the story of Britain’s 2015 Hatton Garden safe-deposit heist, which the prosecutor called “the largest burglary in English legal history.”

The “Grandpa Gang” (also known as “the Diamond Wheezers”) hatched the crime for three years over duck cottage pies in London’s Castle Pub, and the ringleader, Brian “The Guv’nor” Reader (Caine) used his Older Person’s Freedom Pass to get to the scene of the audacious crime without paying bus fare. They cleverly left nothing at the scene for police forensics teams to find and no fingerprints, but after dumb mistakes and squabbling led to their arrest, cops found the book Forensics for Dummies at one burglar’s home, diamond gauges and publications in the Guv’nor’s home, and many jewels hidden under the tombstone of another gang member’s father-in-law.

Written by Mindhunter’s Joe Penhall, 52, and directed by The Theory of Everything’s Oscar-winning auteur James Marsh, 55, King of Thieves isn’t as good as Redford’s and Eastwood’s late-life crime flicks, partly because it sticks closer to the real case, instead of spinning it into a more viewer-friendly tale. But seeing this ensemble in action is such a pure pleasure that it opened against Crazy Rich Asians in England and outsold it in tickets per screen.

Some of the Bad Grandpas’ jokes about aging seem lame or disrespectful, though some of them are fact-based. The gang’s fence, Billy “The Fish” Lincoln (Gambon) did have incontinence issues, and Caine’s irascible gang rival Terry Perkins (Broadbent) was a diabetic who had to carry several days’ supply of insulin. That’s less of a problem than the film’s tone, wavering between comedy and darkness, and the sluggish pace — a caper film should be more playful and lively.

Still, I’m with the British crowds who flocked to see it. The characters are well worth spending time with as they amble toward disaster. Broadbent shows a scarier side than usual, and Ray Winstone still struts with the thuggish style he showed in his 1979 breakthrough, Scum. Tom Courtenay ably plays an internet-averse technophobe inclined to ineptitude, and Caine, speaking in a version of his own original Cockney accent, is affecting as a guy with many ailments who loses his wife (Francesca Annis, 73) early in the film, and figures, what’s he got to lose? As Winstone told the Guardian, “The villains in our story kind of knew they were going to get caught but they still went ahead with it. It was a last hurrah.”

The best bits in the film are shots of the gangsters in their prime, taken from great old crime movies: Winstone’s Scum, Caine’s 1969 The Italian Job, Courtenay’s 1963 Billy Liar. It’s a flashback gimmick used to perfection in a similar but far superior film you should see, 1999's The Limey, with Terence Stamp, 80, who was talked about in casting King of Thieves but isn’t in it.

The main reason to see it is Caine, whose career lately is a protracted hurrah (he had a voice-only role in Dunkirk and plays the adviser to King Wenceslas in the upcoming historical film Medieval).  As he told the U.K. station Magic Radio concerning his plum role in King of Thieves, “It just goes to show, you get to my age and you say there’s no parts, and then suddenly you’re sitting there and there’s a part in the newspaper — if someone’s got the time to sit down and write it.”

Watch an exclusive clip from King of Thieves