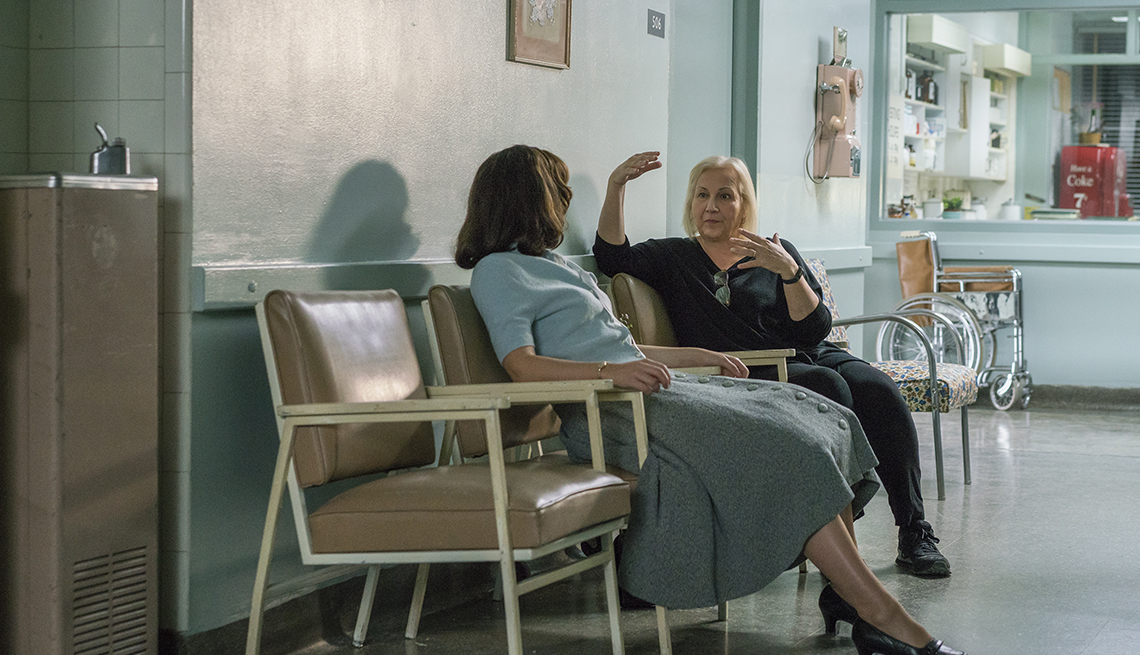 Mimi Leder, right, directs Felicity Jones on the set of the Ruth Bader Ginsburg biopic On the Basis of Sex.

On the Basis of Sex is the true story of blissfully married lawyers Martin and Ruth Bader Ginsburg and their landmark 1972 law case, which propelled Bader Ginsburg to the U.S. Supreme Court and did for sexual equality what 1954’s Brown v. Board of Education did for racial equality. The movie and surrounding buzz have helped cement the justice as a pop culture icon — a fame that has inspired an action-hero doll, Saturday Night Live skits and RBG, one of the most popular documentaries in history, and forced society to rethink its stereotypes about aging.

“With my aunt Ruth,” says Ginsburg’s nephew, Daniel Stiepleman, who wrote the screenplay, “in every election cycle, the conversation is about shoving her out the door, as if it’s time for her to be done because she’s 85 years old. Part of the beauty of this film is the reminder of the experience someone her age brings with them to the job, the wisdom. No disrespect to the younger justices, but she brings a longer memory of where the country has been and how hard it was to move forward, and how easy it would be to slide back.”

“We don’t see older women in that position, so revered,” agrees actress Felicity Jones, who plays a young Ruth in the movie. “Film history hasn’t given us these stories. How did she manage to survive and triumph in a system that didn’t necessarily want her to be there?”

The film’s director Mimi Leder, 66, a nominee for best director in AARP’s 2018 Movies for Grownups Awards (to be telecast on PBS Feb. 15), says that Hollywood is bedeviled by both sex and age discrimination. “I was fired from Hill Street Blues on the basis of sex,” she says. The producer of the TV hit replaced her with males who hadn't directed anything and who didn’t go on to big careers.

"Ageism is an ugly, ugly, ugly thing in our business, and I don’t see a lot of it changing”

Like Ginsburg, Leder triumphed over sexism. From 2007 to 2018, only 4 percent of U.S. films were directed by women, partly because — unlike male directors — female directors often are shunned after a single flop, such as Leder’s 2000 Kevin Spacey film Pay It Forward. So Leder shifted to television, and became what the website the Ringer called “the best director on television.” She won Emmys by making shows whose prestige outshines most movies: The West Wing, Vanished, Shameless, The Leftovers. The Hill Street Blues producer who’d fired her 25 years earlier hired her to direct Dustin Hoffman’s 2012 Luck, and apologized for crushing her youthful dreams.

“I’m amazed I’m still working,” says Leder, “but I’ve never worked more in my life.” The industry’s discrimination against grownups with proven experience remains, however. “Ageism is an ugly, ugly, ugly thing in our business, and I don’t see a lot of it changing,” she says. “When writers hit 55, 60, they say, ‘OK, you’re done.’ They’re not valued as much as one who’s fresh — well, the old voice can be just as fresh as the new voice. It’s so unbelievably nasty and unjust.”

On the Basis of Sex helped revivify Leder’s career, and also that of Stiepleman. He’s adapting the novella Planet of Exile, by Ursula K. Le Guin, who triumphed over sexism in the science-fiction world, was declared a Living Legend by the Library of Congress, and died at 88 last year. “I’m building my career on the shoulders of octogenarians,” says Stiepleman. Leder’s next prestige project is Apple’s forthcoming show about a morning-news team starring Jennifer Aniston, 49, Steve Carell, 56, and Reese Witherspoon.

Exulting in her hard-earned late-life success, Leder has no plans to retire — ever. “I’m just gonna keep working,” she says, “until they throw me out.”