With Northern California tragically ablaze, now’s the time for a heartbreaking, totally inspiring superhero movie about real people: Arizona’s Granite Mountain Hotshots forest fire crew, the only local-town team ever to win elite national status, a title they justified by risking their 20 lives to save a whole town in the calamitous 2013 Yarnell wildfire, the deadliest day for U.S. firefighters since 9/11. If viewers’ tears could be dropped from helicopters, this film could douse a wildfire. It’s also as gripping as Backdraft or an infinitely smarter The Towering Inferno.

But Only the Brave is not the rote, phony macho flick you’d expect. It’s an authentic, acutely sensitive study of what one character calls a “SEAL Team 6” of a tight group of young lifesavers who called their kind, tough boss, Eric Marsh (Josh Brolin, 49, an actual Arizona firefighter in his youth), “Papa.” As Marsh’s rancher wife, Jennifer Connelly, 47, has an unusually vivid role for a hero’s wife — the scenes from this troubled, sparky marriage between ex-addicts seem real. Countless movies spout cynical hogwash about protagonists’ passion for their work, but the best friend of Granite Mountain’s Robert Caldwell (played by Dylan Kenin), the team’s intellectual, buried with a Hemingway first edition, said he spoke of firefighting as if it were a “love affair.” The movie captures this feeling, reminding one of Truffaut's comment that it's hard to make an antiwar movie because war is such an exciting cinematic subject.

The main love story, of course, is between the guys, particularly Marsh and his newest, greenest recruit, Brendan “Doughnut” McDonough (Miles Teller in top form), a jailbird loser and opiate stoner who reminds Marsh of himself as a young screw-up. Doughnut wants to prove himself both to the guys and to the understandably skeptical woman he’s just impregnated, and there’s an amusing Three Men and a Baby-like scene where his pals help him with the tot — fatherhood terrifies them more than wildfire. 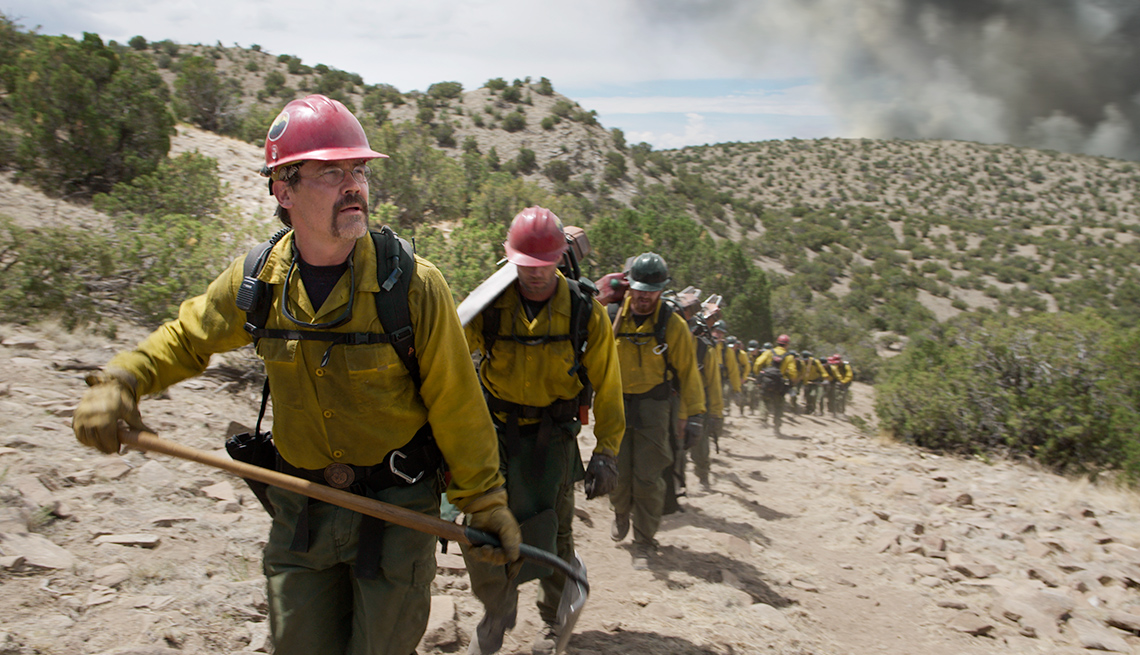 Josh Brolin stars in "Only the Brave."

It’s refreshing to see older actors in roles that command respect, instead of going for the cheap laughs Hollywood often associates with age. Jeff Bridges, 68, makes the most of a smallish but emotionally pivotal part as Prescott’s Fezziwig-like wildland division chief, who gives Brolin’s crew one last shot to win Hotshot status and ensure their funding. Brolin’s ace performance recalls Tommy Lee Jones in No Country for Old Men, which made Brolin a star at 39, though Jones is way more irritable in life and onscreen. Bridges and Brolin are smooth together, each as good as they were in their last movie, the Coens’ 2010 True Grit.

It’s tricky to keep all the Hotshots in focus, but the first-rate screenplay by Ken Nolan and Eric Warren Singer does pretty well, reflecting their respective expertise in carving pulse-pounding art out of real lives in Black Hawk Down and American Hustle. Kudos (and pots of money, please) to GQ’s disaster correspondent Sean Flynn, whose Granite Mountain article is the core of the film. Cinematographer Claudio Miranda gives us images of eerie, unexpected visual poetry: a homeowner spotting a chopper sucking water from his swimming pool through a long hose, a bear engulfed in flames and running for dear life (which apparently happened). This movie gives one high hopes for Tom Cruise’s 2019 Top Gun sequel, rumored to be directed by Only the Brave’s Joseph Kosinski.

I once failed to make the cut for an inter-regional forest fire crew. I ignorantly wanted to be where these guys were, earning $20 an hour like my hotshot best friend who made the team, hunkered facedown in dirt under tiny fireproof blankets praying that the 1,000-degree inferno overhead — one-tenth as hot as the sun's surface — would race past before my oxygen and luck ran out and I broke my family's hearts. Only the Brave shows me what I missed.