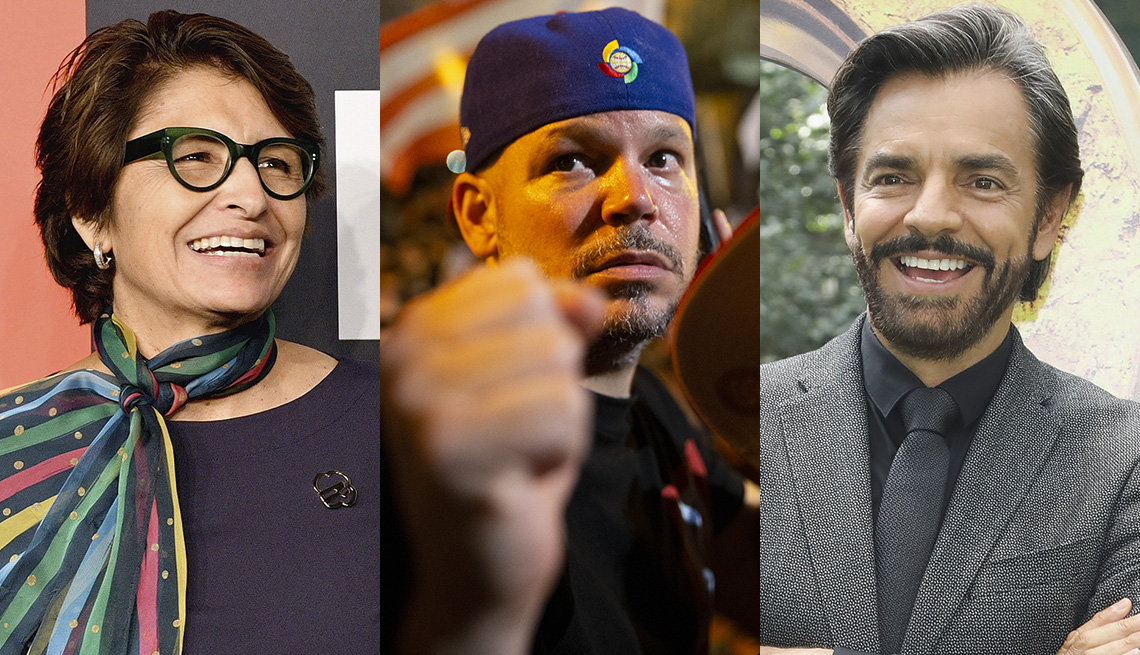 En español | Tuesday night’s acceptance speeches and performances at the 32nd annual Hispanic Heritage Awards acknowledged Latinos’ history, contributions and challenges — beginning with a moment of silence to remember victims of the Aug. 3 shootings in a heavily Hispanic neighborhood of El Paso, Texas.

Hundreds of activists, artists, celebrities and leaders attended the event at the John F. Kennedy Center for the Performing Arts in Washington.

“Our country needs to know our stories, needs to know the talent that lives in our communities and the impact we are having,” said José Antonio Tijerino, president and chief executive of the Hispanic Heritage Foundation that gives out the awards.

AARP was a sponsor of the Hispanic Heritage Award for Film, given to Mexican actor and producer Eugenio Derbez.

‘Tell the story of our people’

Isabela Moner, the Peruvian American actress who costarred with Derbez in this summer’s Dora and the Lost City of Gold, and Puerto Rican comedian Elizardi Castro presented Derbez with his award. In his speech, Derbez, 57, thanked the Latino community for its support and praised its family values as one of the richest aspects of Hispanic heritage.

“It doesn’t matter if you got here yesterday or three generations ago, this heritage is yours,” he said. “We don’t keep our heritage to ourselves. The more we share it, the richer we become.”

The comedic actor spoke of the first 10 years of his career when he accepted stereotypical roles before he grew tired of them and returned to Mexico to direct, cowrite and star in Instructions Not Included, a 2013 crossover success that shattered U.S. box office records to become the highest-grossing Spanish-language film released in the United States.

“As Hispanic actors and filmmakers, we have to tell the story of our people as we know them, the stories of the blue-collar workers as well as the lawyers and senators,” Derbez said.

The crowd roared when Los Tigres del Norte — a seven-time Grammy-winning band and norteño regional Mexican music legends — took the stage. The band played a song from their recent live album and Netflix original  documentary, Los Tigres del Norte at Folsom Prison, which filmed them playing for the inmates at Folsom Prison on the 50th anniversary of Johnny Cash’s iconic performance there.

“It was a wonderful evening of unity and celebration to honor Latinos for their accomplishments,” said Yvette Peña, AARP vice president of Multicultural Leadership Hispanic/Latino Audience Strategy. “We need to let America know all the valuable contributions that Latinos are making, and the Hispanic Heritage Awards provides the perfect platform.”

The world champion boxer in three weight divisions supports organizations that serve youth and helped Mexico earthquake victims in 2017. Speaking to the audience in Spanish, Álvarez said he stood on the shoulders of the millions who have helped him become successful, adding that he hopes one day his own shoulders will be wide enough for someone to stand on.

• Alejandro Fernández, winner of the Hispanic Heritage Award for Music

He gave thanks to his fans, family and country. The Mexican icon, who has sold more than 35 million albums worldwide, has sung duets with the likes of Gloria Estefan and Rod Stewart, and is the son of the legendary Vicente Fernández.

Addressing the audience in both English and Spanish, the rapper-activist, who led tens of thousands in protest in Puerto Rico to change the political landscape, said the protests served to bring together Puerto Ricans of all political persuasions. He urged all to exercise their right to protest when they want change.

• Where: Local PBS stations, online later at pbs.org or the PBS Video App

Four Latinas accepted the Hispanic Heritage Awards for Leadership and were greeted with a lengthy standing ovation. They spoke about their personal travails, the people along the way who opened doors for them, and the need for women to make the world better for future generations.

• Sylvia Acevedo, an engineer, rocket scientist, tech entrepreneur and the chief executive of Girl Scouts of the USA

• Alejandra Y. Castillo, chief executive of YWCA USA that serves 2.2 million women and girls around the country through a network of more than 200 associations

• Virginia Kase, a 25-year veteran in the fight for social justice and civil rights who is now chief executive at the League of Women Voters of the United States

The Hispanic Heritage Awards began in 1987 as a way to commemorate Hispanic Heritage Month. Today the awards are considered among the highest honors by Latinos and for Latinos, and 40 national institutions that serve Hispanics support the program.

Tuesday night’s event is considered a launch for the Hispanic Heritage Foundation’s year-round programs that connect Latino leaders in the classroom, community and workforce.

This story was updated to include information from the awards ceremony.