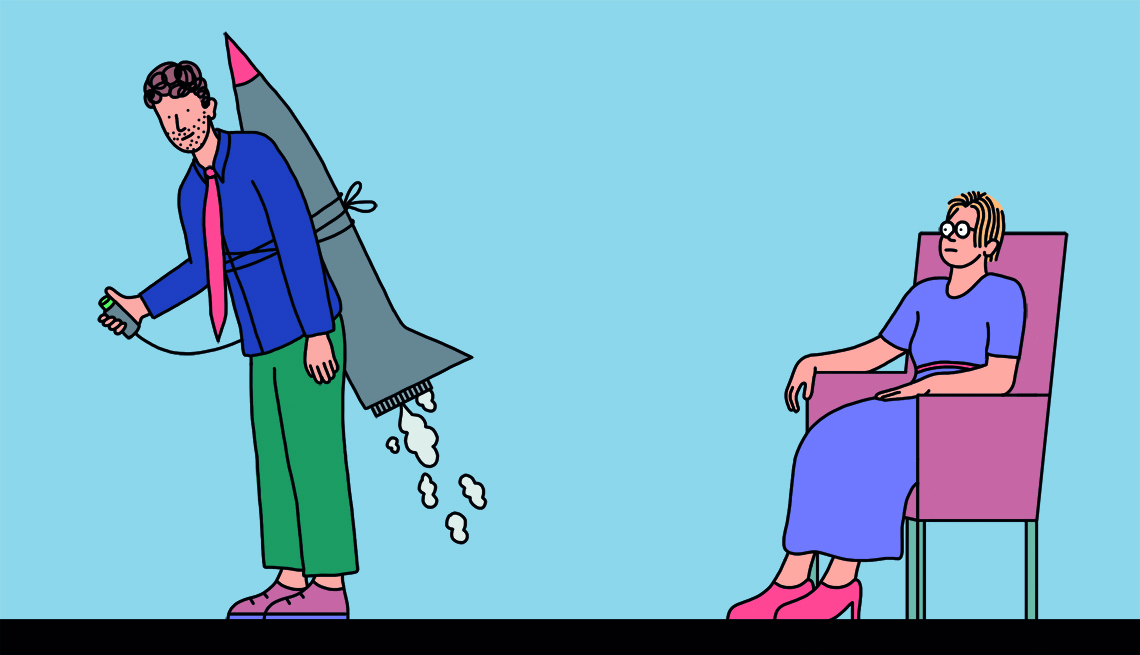 It was the deadbeat headline of the year: Last May, Mark and Christina Rotondo legally evicted their able-bodied 30-year-old son, Michael, when he refused to voluntarily move out of their home. He claimed his full-time job was working toward gaining the custody of his son, leaving no time to get a conventional job to pay $55 a week toward child custody. The reaction was divided, of course, but an informal survey of internet sites reveals the vast majority of the world are on #TeamMomAndDad.

This phenomenon of grown progeny continuing to squat in their parents’ homes has become known as “failure to launch.” According to the 2017 survey of the U.S. Census Bureau, one-third of all adults ages 18 to 34 — about 24 million — still live at home. There are financial factors that can make living at home beneficial to both parent and adult child, and many of these young people contribute to the household. But many more don’t. Some adults who are supported by their parents call it “being on the payroll.” The grim joke among parents goes something like this: “What does your son do?” “He’s a waiter.” “A waiter?” “Yes, he’s waiting for me to die.”

So it may not be surprising that in the past few years, there’s been an uptick in “failure to launch” (FTL) programs in rehab sites across the country, often as an adjunct to mental health and drug treatment. “There is only beginning to be research on this population,” says Richard Silver M.D., the director of the Thrive Center for ADHD and Comprehensive Mental Health Care of Central Maryland. “But in general, these young adults are not developing the identity, autonomy and self-regulation necessary to live independently. There is learned helplessness and learned hopelessness.”

The first time you hear the phrase “failure to launch,” you want to put a knife in your heart,” says Anna B., 55, a mother in Los Angeles, whose son is about to fail out of his second elite East Coast University. Right now, her son spends most of his days smoking weed and watching anime. He is about to enter an outpatient clinic near his home. “These are smart kids from well-off families who can’t get themselves to a job interview,” she says. “There is often underlying anxiety and depression, and so drugs and social media help them further isolate themselves from the world.”

Generally, in the FTL population, there is a trifecta of badness: heavy marijuana use, internet addiction and some form of family dysfunction — parents who, with the best intentions, end up adding to their child’s paralysis.

“I remember spring vacations where my kids would be indoors, watching videos, while their mother did their homework,” says Todd S., who's recently divorced. Both of the 63-year-old's adult children live with him and don’t have jobs. “One of my daughters had social anxiety, so my wife made friends for her — would arrange playdates, bake cookies with the kid, make sure everyone had a good time. In all these different areas of life, my kids barely had to show up. Their mother didn’t want them to experience any discomfort.”

It’s unclear how many FTL programs are available — and insurance doesn’t pay, so they are still the province of the well-off. But specialists in the field insist the offers for services are growing, even when a facility did not intend to market itself this way. “Historically, we were a mostly a mental health facility working with slightly older people on mental health issues — bipolar, schizophrenia, depression,” says Rachel Stark, director of admissions and outreach for the Spring Lake Ranch Therapeutic Community in Cuttingsville, Vt. “But over the past 10 years, our clients got younger and younger, and struggling to emerge into adulthood became a more common problem.”

Treatment is customized to the young adult, but the key to any program is creating discomfort — and ramping it up. Because let’s face it: Many of us wouldn’t feel compelled to change if all our needs were met. “Cold turkey is not a useful approach,” notes Judith Sills, a Philadelphia psychologist who treats the parents of FTL young adults. It’s usually more of an angry outburst than an effective strategy. Much guilt ensues, but not much movement.”  Instead, Sills says, “you start with setting boundaries on what resources the parents will share with their adult child — and gradually and methodically remove those resources.” So, for example, it may be: Roof over head for a year: Yes. Phone, car, internet: No.

Many of these adults are used to being able to worm out of work and accountability. Not in rehab. “Our clients work on our 700 acres in a variety of jobs — gardening, splitting trees, making maple syrup and so forth,” Stark says. Adds Silver: “There is a small number who need … let’s call it additional encouragement … to get out of bed. So we send over one of our staff — who was one of my original FTL patients. Jaredis the size of a grizzly bear.” The Thrive Center's Jared Bosley has been known to knock a reluctant client’s mattress to the floor and shake the person out. “Additional encouragement” here sounds alarmingly like “enhanced interrogation,” but not in Bosley’s paws. Silver continues: “Jared is incredibly sensitive, and he builds trust with these kids because they know he’s been where they are now.”

Because that’s what so many well-meaning parents don’t realize about their FTL kids. For so many, it’s not so much about being lazy as about being frightened and ashamed. “Think what it’s like when all of your contemporaries are going on to relationships, achievement, independence — the hallmarks of growing up,” Silver says. “There is such shame, and shame itself is paralyzing.

“It’s taken 20 years to create this adult who is in this situation,” he continues. “We need about a year to turn it around.”

The open question is: What constitutes a successful launch? Being out of the house is not always enough. The police had to come and escort Michael Rotondo from his home. Sadly, according to the family lawyer, there has been no contact with his parents. He has opened a website called In the Matters of Mr. Rotondo, where he offers his perceptions of what is unfair about the judicial system, as well as sells coffee mugs plastered with his photo.