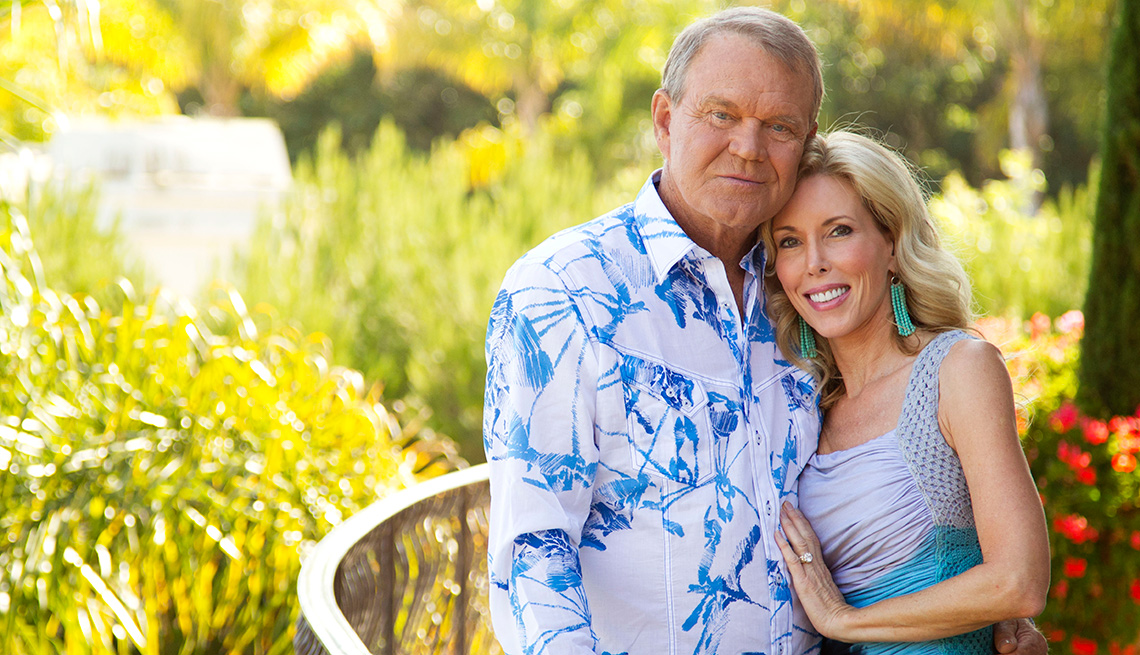 Kim Campbell says following Glen’s diagnosis she quickly learned that every moment caring for someone with dementia is so unpredictable.

Two months after singer Glen Campbell’s death from Alzheimer’s disease, his widow and primary caregiver, Kim, is expanding her mission to help others. She learned a lot about the disease and how to cope with it, as a caregiver, since Campbell’s diagnosis in 2011, and wants to use that experience to educate people on caregiving.

“When the doctor used the ‘A’ word, it just terrified me and shocked me, I really didn’t know much about it,” she said. “But I started to ask questions: Is it fatal? He said, ‘yes.’”

Rather than hanging up his guitar, Glen made the decision to go public with his diagnosis and continued doing what he loved with the people he loved, and showed the world how to live with the disease. He went on a “Goodbye Tour” and agreed to have a camera crew shadow him throughout the early stages of his battle. All of it is highlighted in the documentary, Glen Campbell: I’ll Be Me.

“The late stages of Alzheimer’s are absolutely heartbreaking.”

From her home in Nashville, Kim, 59, spoke to AARP by phone about how her caregiving experience has changed her life. She also talked about what we didn't see after filming of the documentary ended in late 2012. 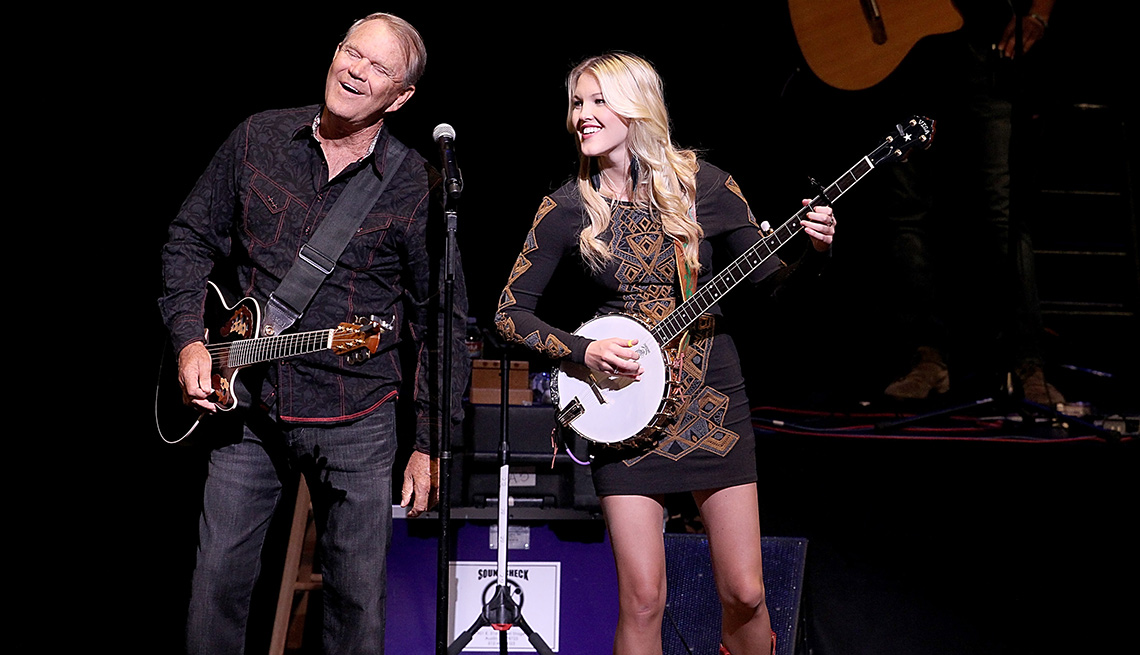 Many safeguards had to be put in place for Glen's tour. For example, the front of the stage was lined with reflective tape and surrounded with monitors, because his depth perception was a concern. Also, his daughter, Ashley, wore a wireless microphone so she could quickly move around if things started to not go as planned.

“I’ve heard the saying, ‘If you’ve seen one person with Alzheimer’s — you’ve seen one person with Alzheimer’s.’ Certainly, there are similarities that they all have in every stage, but every individual is different.” And Kim pointed out that while caregiving is also different for each person, there are some fundamentals she learned, misconceptions she wants to correct and stigmas with long-term care she wants removed. As a caregiver, she knows firsthand how draining and overwhelming the life of a caregiver can be. She wants to connect with caregivers everywhere to let them know they aren’t alone.

For her, a realization came in 2014, when Glen was in need of 24-hour supervision. He had his days and nights confused, so with help of four family members they took shifts staying up with Glen. Kim recalled that one night she heard her daughter crying in the hall as she cared for Glen. “She said, ‘I’m 27 years old, and I’m still living at home — taking care of both my parents.’” Her daughter referred to both parents because Kim was dealing with depression. “She was there to help me, too,” Kim said.

Shortly thereafter, the Campbells began looking into other care options for Glen, originally just to get a little help. They started with a day care center. Kim said when she took him inside, she was filled with anxiety — but he wasn’t. “The minute he walked in the door, he started smiling, shaking everyone’s hands, handing out guitar picks, as if he was at a meet-and-greet.” Kim left him for the day, only to go home and cry her eyes out. “It was so traumatic for me.” But when she went to pick him up, she began to realize that Glen might not be experiencing the same feeling. He was enjoying himself, interacting with people going through similar situations and with many caregivers to tend to his needs. After his first day care visit, the Campbells decided to give respite care a try.

The first night the Campbells had someone else look after Glen, the entire family went out. It was their first outing in a very long time. Kim said that all evening they were carrying sadness with them because Glen wasn’t with them. “When we walked in the kitchen that night, [our daughter] said to me, ‘Mom, I’ve decided not to feel guilty for being happy.’ And I thought, 'oh my goodness, Glen would never want you to feel guilty for being happy.' And I just realized at that moment that we had to make a decision that was not only best for Glen, but for the whole family.”

A few days later, the Campbells joined a memory care community in their hometown of Nashville. Kim said that although Glen was no longer living at home, that didn’t mean that she stopped being his caregiver; she continued to help bathe, dress and eventually feed him daily. During this time, Kim connected with other wives and families going through similar situations. She also launched the blog and website CareLiving.org to open a dialogue with and offer positivity and a shift in perspective to caregivers. “When I started my blog, it was because I was depressed, my friends were depressed,” she said. “My blog is a place of positivity and hope, and encouragement and faith.” 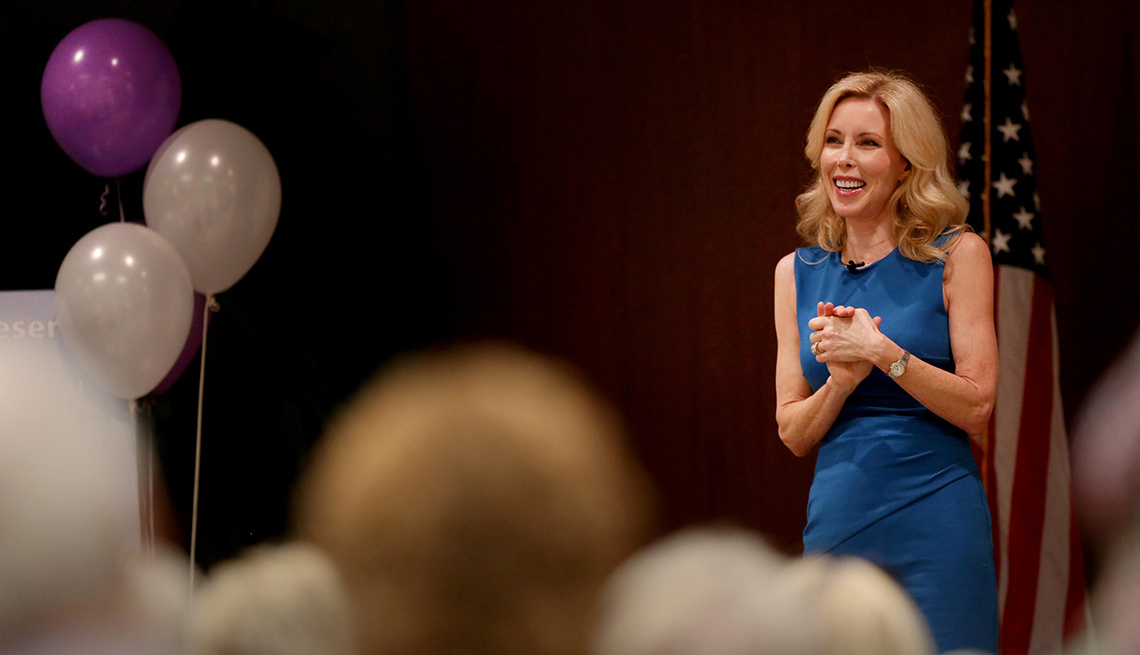 When Kim Campbell speaks to groups, she discusses how most people have no idea what family caregivers are trying to manage in their home.

She is grieving from her loss, but Kim is still a caregiver — in a different way. She announced during our interview that she is launching the CareLiving Foundation in early 2018. She wants to educate people nationwide on caregiving, letting them know that there is assistance available, and it's OK to seek help. “The stigma surrounding nursing homes is so wrong, and prevents caregivers from getting the help they need,” she said, adding that nursing homes and memory care communities are two very different things to begin with. Another purpose of the foundation is to inspire and activate communities, encouraging them to step up and provide specialized care. Kim would also like to raise funds to help existing communities advance their centers. She calls this next step the third part of their family journey — after the documentary and website.

Throughout our interview, Kim talked about positivity and how it is a key part of caregiving. She also said caregivers need to remove a word from their vocabulary: guilt. You didn’t cause the condition or diseases, she said, so don’t feel guilty. “You may feel sad; you may feel lonely; you may be depressed. But don’t reach for guilt.” She said when you look beyond that word, it helps you properly identify your feelings.

“It is such a tough world to be in. It is such a hard position to have to be a caregiver. I really want to work hard to change perspectives, to try and look on the bright side of things, to try to cherish moments and look for joy in each day.” 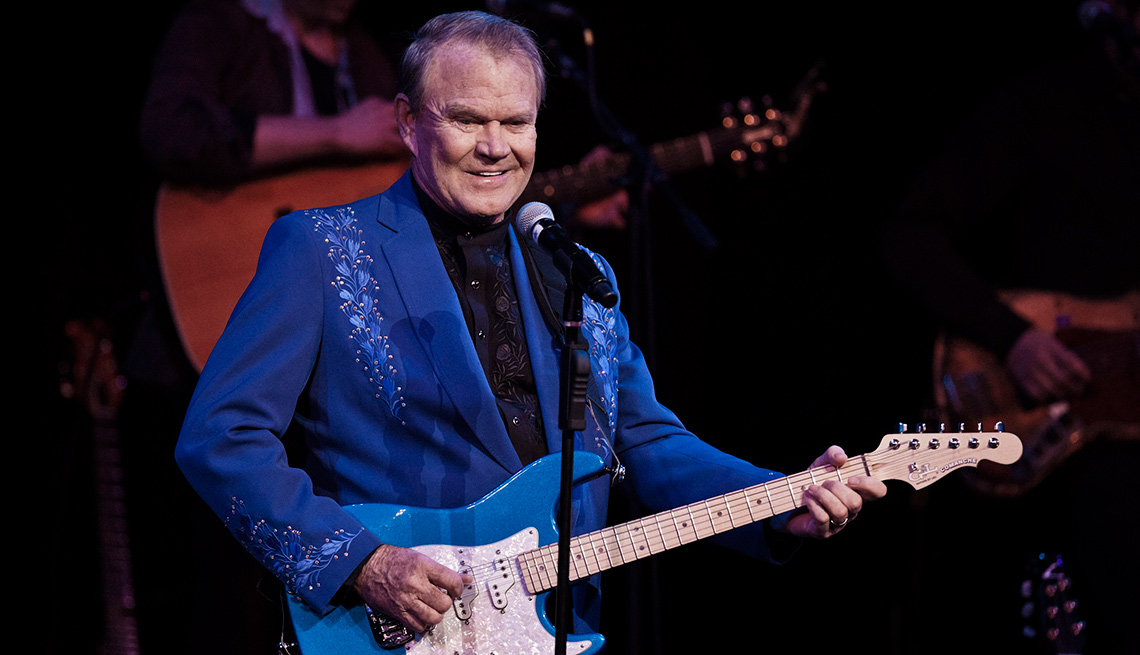 Glen Campbell was weeks away from a tour when he learned of his diagnosis. His doctors said music is good for the brain and gave Glen the OK to tour.