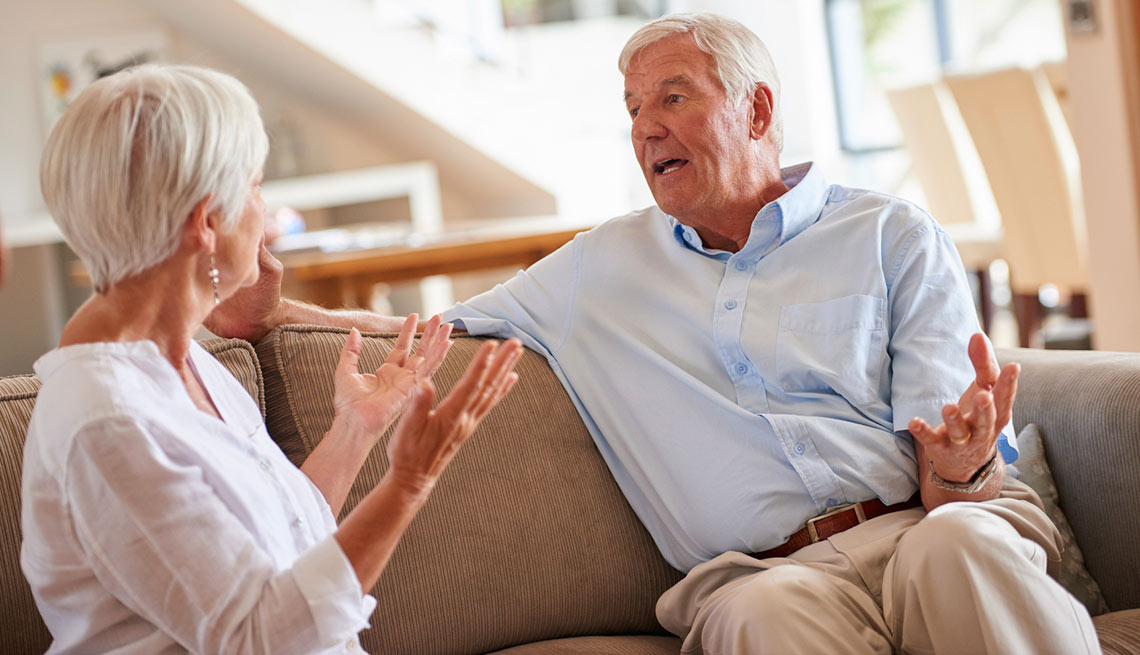 Diseases such as Alzheimer's and dementia can cause behavioral changes such as anger and verbal abuse that can lead to arguments.

When he walked into my office, Pierre appeared a beaten man. Stooped, sad and sighing, he led his wife of 50 years by the hand. Ann, scowling, asked why she needed to be there: The problem lay with her husband, she said — definitely not with her.

As Pierre understood, but Ann didn't, she had been showing the sort of personality change and memory decline over the past year that is characteristic of Alzheimer's disease. Unfortunately, she refused (until recently) to see a doctor for an evaluation. She was furious at Pierre and berated him daily anytime he pointed out problems with her memory or restricted her from driving. She would curse and scream at him, shake her fists in his face and occasionally even slap him.

Pierre loved his wife dearly but was at his wit's end. Only by threatening to leave her was he finally able to get her to reluctantly agree to see me in our memory center.

The verbal abuse that Pierre was experiencing as a caregiver for someone with dementia is very common and often takes a severe emotional toll. These caregivers have significantly higher rates of physical illness, depression and even mortality compared to noncaregivers, which in turn reduces their ability to provide quality care.

As I reminded Pierre, it's crucial that you, the caregiver, not blame yourself for an illness that you cannot control. Talk therapy and support groups with other caregivers in similar situations can help. You also should make time to get regular medical checkups, exercise and a break from your loved one to recharge. And if you're suffering from severe symptoms such as poor sleep, weight loss, loss of energy and interest, intense guilt and even suicidal or homicidal thinking, seek prompt psychiatric attention.

But you also need to get to the root of the abuse, which can often be reversed or diminished with treatment. There are three basic steps that can turn the tide here.

Despite how common and obvious changes in memory and other cognitive skills may be, the average person with early-stage Alzheimer's disease (the most prevalent form of major neurocognitive disorder) is not diagnosed until one to two years after the onset of symptoms. If you're concerned, it's important that you encourage your loved one to have a comprehensive evaluation that includes, among other tests, a physical and neurological exam, a mental status exam and a brain scan. The physician will want to rule out the many other issues than can cause a change in cognition and behavior — it's not always Alzheimer's.

2. Determine the cause of the abusive behavior

A geriatric psychiatrist or other clinician who has specific training in both mental health and neurocognitive disorders can help you understand why your loved one is suddenly cruel or angry. The four most likely causes can be summarized by four D's: denial, depression, delusions and disinhibition.

Denial. In my practice I am less concerned about patients who tell me all they've forgotten than those like Ann who are oblivious to their cognitive changes and tend to get angry and erupt at anyone who suggests that they are impaired.

Depression. Depression is extremely common in the setting of neurocognitive disorders, sometimes as a result of knowing the diagnosis but more commonly due to pathologic changes in brain structure and chemistry. Depression may manifest in irritability or anger instead of sadness, and is accompanied by symptoms such as insomnia, poor appetite and weight loss, lack of energy and interest, and physical aches and pains.

Delusions. These are defined as false but fixed or deeply held beliefs, and more than half of people with Alzheimer's and other neurocognitive disorders tend to have them at some point. Delusions often involve paranoia (they might believe that someone is trying to harm or steal from them) or jealousy (accusing one's partner or spouse of having an affair, for instance). Delusional beliefs cannot be altered by logical reasoning or argument, and can lead to intense fear and anger.

Disinhibition. Characterized by inappropriate, uncharacteristic or strange behaviors, disinhibition is seen in early stages of frontotemporal dementia and in later stages of Alzheimer's. In addition to verbally abusive or inappropriate comments, it may include behaviors that seem out of control, crude or embarrassing.

Once the doctor has a hypothesis of what may be driving the verbal abuse, a relevant treatment plan can be devised. Denial is difficult to address but does not always require confronting the person with the diagnosis. Instead, the doctor needs to build a supportive relationship around issues that the afflicted person is concerned about, such as poor sleep or nervousness. Depression can be successfully treated with both antidepressant medication and various forms of talk therapy. Delusions often require antipsychotic medications, while disinhibition may respond to certain medications that temper the lack of brain control.

In Ann's case, she was clearly in denial of any memory problem, but she was also quite depressed. Her sleep and appetite were poor, and this worsened her mood. She agreed to try an antidepressant to help both problems, and within several weeks she was feeling better and showing less anger and resistance to Pierre. Separately, we provided education and counseling to Pierre, and he started attending our caregiver support group. We've been able to forge a long-term relationship with Pierre and Ann that will track the long-term, progressive course of her illness.

There are no easy answers. Caregivers of people with dementia are often running a marathon, not a sprint. But in many cases there are ways to address abusive behavior, and caregivers can learn strategies to distance themselves from it emotionally, find support and get respite care.

And we can all hope for a more effective treatment and eventual cure for this mental scourge.

Marc E. Agronin is a geriatric psychiatrist in Miami and the author of The Dementia Caregiver: A Guide to Caring for Someone With Alzheimer's Disease and Other Neurocognitive Disorders and How We Age: A Doctor's Journey into the Heart of Growing Old.