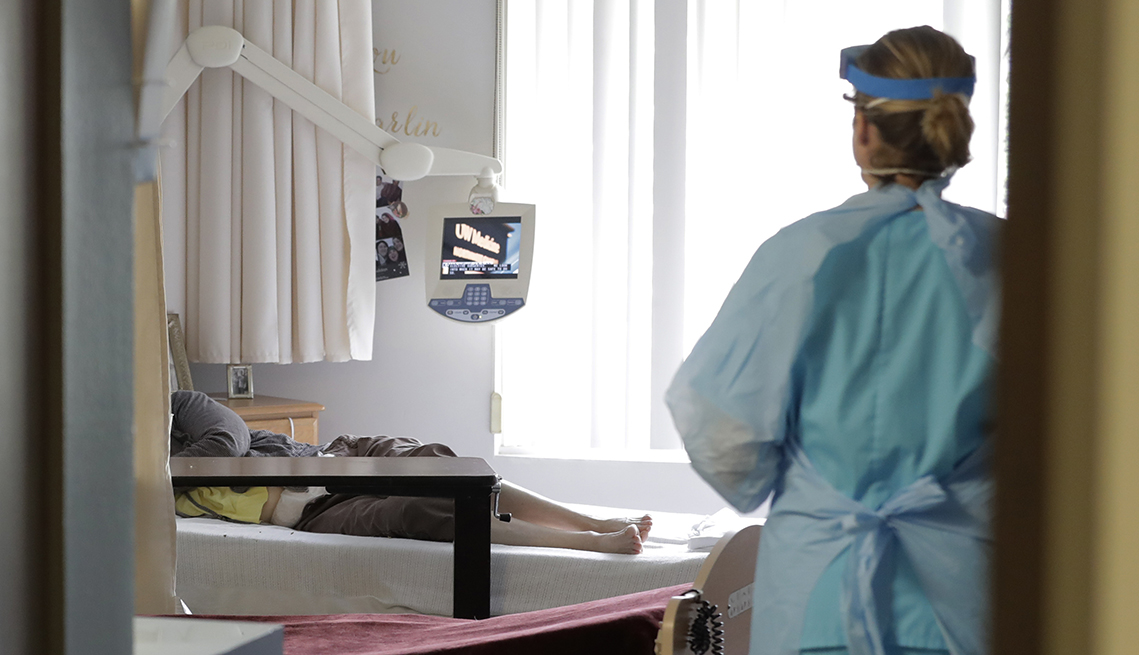 When Susan Kenney didn't get a response to her frantic calls about the results of her 78-year-old father's COVID-19 test or an update on his pneumonia from the Massachusetts nursing home where he lived, she got desperate.

Kenney, 53, took a grease pencil and wrote on the side of her car: “Is my dad alive? Shame on the Soldiers’ Home, over 30 hours with no call back.” Then she drove to the Soldiers’ Home in Holyoke and parked outside.

Eventually she learned that her father, Charles Lowell, had tested positive for the virus. She was able to FaceTime with him before he was transferred, about a week later, to a nearby hospital for additional care, where he died from the virus within days.

Kenney and her mother were able to briefly visit with him in the hospital. “We were worried about our health,” she said, “but I know my mother wouldn't trade that for the world.” Still, the time spent waiting for information about her father's condition and being unable to communicate with him was “heart-wrenching,” Kenney said. “It's a horrible time for all the families."

Since then, the Soldiers’ Home, which serves military veterans, has emerged as a coronavirus hot spot. Massachusetts officials have reported that at least 52 of 62 recent deaths there were linked to COVID-19.

The coronavirus pandemic has devastated nursing homes across the country. At least 10,000 of the Americans who’ve died of COVID-19 — more than 1 in 5 reported coronavirus deaths — were living in or connected to nursing homes, according to a Wall Street Journal investigation.

The crisis has sparked calls for more testing kits and personal protective equipment for nursing homes, where staff members have been forced to reuse masks and gowns. The flood of deaths has also cast a klieg light on long-term problems with America's nursing home system, including inadequate staffing, infection control and communication with families.

Now, longtime advocates for the nation's roughly 1.3 million nursing home residents see the crisis as an opportunity to push for reforms.

AARP is asking Congress to require nursing homes to facilitate virtual visits between residents and their families. The organization is pushing for more real-time transparency around which homes have COVID-19 cases. And it wants a plan to deal with the reduction of nursing home staff, which was already stretched thin in many places.

"This is a transformative event for the long-term care industry,” said David Bruns, a spokesman for AARP Florida, which is pushing for more transparency and accountability for nursing homes.

Relatives of nursing home residents — and of residents who have died — are also clamoring for changes, said Janet Zander, the advocacy and public policy coordinator for the Greater Wisconsin Agency on Aging Resources. “It's going to come up through the grass roots, because families are just furious,” Zander said. “It's going to take that kind of push to get legislation around that."

This week, the federal government announced new requirements for nursing homes to inform residents, their families or representatives, and the Centers for Disease Control and Prevention (CDC) about new COVID-19 cases.

"Nursing homes have been ground zero for COVID-19,” said Seema Verma, administrator of the Centers for Medicare & Medicare Services (CMS) — which regulates nursing homes — at a White House briefing. “It's important that patients and their families have the information that they need, and they need to understand what's going on in the nursing home."

AARP had pushed CMS to require the names of facilities with confirmed COVID-19 cases to be made public daily, which the new rules don't appear to specifically do. “Given the urgency of the moment, it isn't fully clear how quickly or how frequently this information on nursing home cases and deaths to COVID will be shared with residents, families and the public,” said Elaine Ryan, AARP vice president for state advocacy and strategy integration.

Richard Mollot, executive director of the New York-based Long Term Care Community Coalition, worries that the government's online tool for collecting coronavirus data from nursing homes isn't ready yet. “It is a little late in the game to first announce that a data reporting tool ‘will be’ provided,” he said by email. “What are they waiting for? This should have been done weeks if not months ago."

The slow response comes as the state-based regulators who typically monitor nursing home complaints have been kept out of the facilities for weeks because of the pandemic, further reducing transparency. Each state has a long-term care ombudsman who addresses complaints in the long-term care system, though those offices are now under new scrutiny.

"In Maryland, nursing homes only need to be visited by a regulator once a year,” said State Sen. Delores Kelley, who chairs the Maryland Senate's Financial Committee. The nursing home crisis shows that “you've got to have more oversight and regular observation."

A call for more virtual visits — and more staff

Much of the push for nursing home reform is directed at the nation's state houses. AARP state offices are pushing governors to require nursing homes to facilitate virtual visitations via videoconference platforms like FaceTime and Zoom, in light of the federal ban on most in-person visits. These video chats combat social isolation and provide a layer of family oversight.

"We're very concerned about people being able to engage with their families remotely and get regular information on how they're doing,” said Tammy Bresnahan, director of advocacy for AARP Maryland.

In Washington, AARP wants Congress to require nursing homes and other long-term care facilities to support such visits and to provide federal dollars to help pay for the underlying technology. “For some residents, these virtual visits can make the difference between life and death,” the group said in a recent letter to CMS.

Staffing levels are often influenced by Medicaid funding, which varies by state and pays for a huge portion of nursing home care. Linial wants such financial support to be tied to staffing benchmarks. “Most nursing homes have been chronically underfunded for years,” he said. “There's a correlation between high staffing levels and good quality care."

As the federal government has sought to rein in Medicaid reimbursements in recent years, some nursing home experts say care has suffered. “If we contain Medicaid costs long-term, to what extent are nursing homes not receiving sufficient funding for staff needs?” asked Larry Polivka, executive director of the Claude Pepper Center at Florida State University, which studies issues facing older Americans.

Now, Polivka hopes CMS moves in the opposite direction.