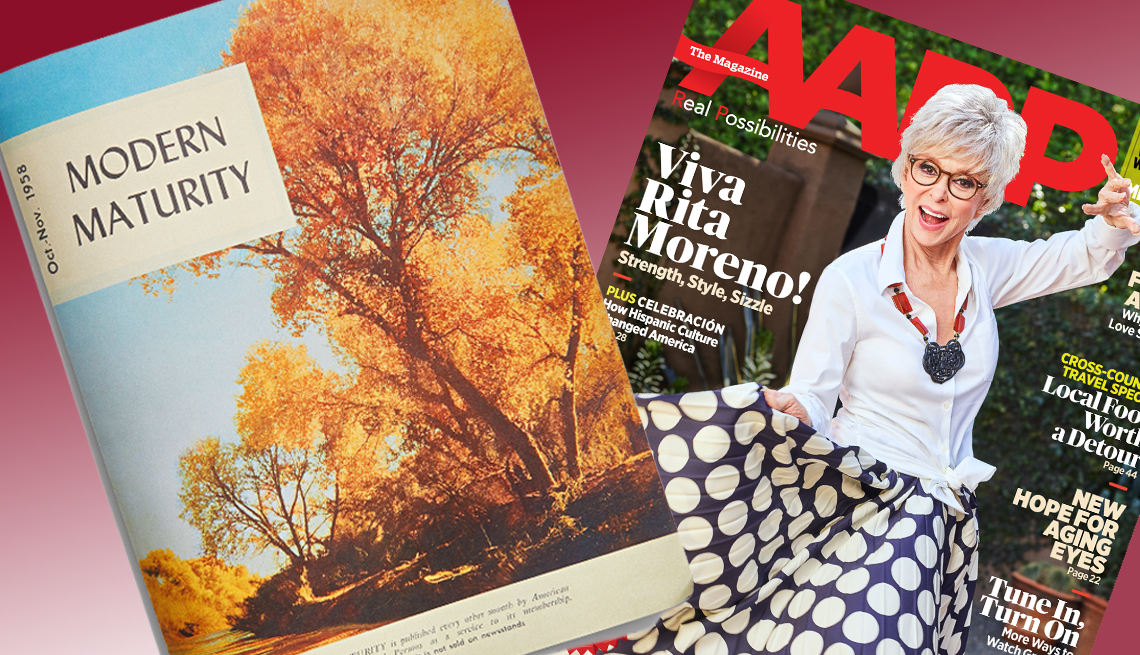 En español |During the summer of 1958 at her home in Ojai, California, AARP Founder Dr. Ethel Percy Andrus began roughing out plans for a magazine that would serve the social and cultural needs of AARP members. It would provide a new image of aging, exploring common challenges and sharing stories of men and women who continued to strive, grow and enjoy life as they matured.

Leonard Davis, a business advisor to Dr. Andrus, and his family were vacationing in Anaheim at Disneyland that summer when Dr. Andrus called from Ojai, a two-hour drive to the north.

“I’d like to come down and show you something,” she said to him.

The “something” was a mock-up of the first issue of Modern Maturity. The new magazine was so crucial to the successful launch of AARP that Davis cut short his Disneyland trip and drove up to Grey Gables to spend a few days perfecting the mock-up with Andrus, her sister Maud and Ruth Lana, another early AARP pioneer.

The first issue of the new bimonthly was dated October-November 1958. It would have been the September-October issue except that Dr. Andrus thought the pastel pinks and blues on the proposed cover wouldn’t appeal to prospective male members. Eventually, she selected a photo of trees in full autumn color, appealing to both women and men. The magazine needed to make a good first impression, she knew. It had to captivate readers with compelling articles and high-quality design, starting with the cover. “As you read this first issue of Modern Maturity, we hope you will find many interesting features which will relax or stimulate you according to your moods,” she told her readers.

And Dr. Andrus concluded by disrupting stereotypical views of getting older: “Aging is not just a problem; it represents a real and thrilling challenge. It is one thing to recognize that older people represent the nation’s greatest single human resource available and it is quite another to do something about it.”

That first issue went to the entire membership of the National Retired Teachers Association (NRTA), the organization Dr. Andrus founded in 1947 to address the economic challenges and health insurance needs of educators in retirement — the seed that grew into AARP. The magazine invited them to sign up for AARP and to recommend the new organization to their friends. Articles discussed a range of topics. “How-tos” covered finding a job despite being over 65, keeping fit ("How a Queen Stays Slim") and becoming a better bridge player. There were book reviews and an article on aging by Eleanor Roosevelt. The first issue made a prominent pitch for the AARP group insurance plan, which took up five of the magazine’s 52 pages.

The magazine proclaimed its ambitions and high purpose from the outset: “to create a showcase for the achievement of our people; to build many bridges between the worlds of our needs and the powers that can answer those needs; to open the door to all the various human adventures we can picture for you; and to serve as a forum for the discussion of subjects of interest to retired persons.”

In 2003 the organization renamed it AARP The Magazine, and it's now America's most-read magazine — offering the same message Dr. Andrus sent readers in that first issue of Modern Maturity: Being older is not a disability; it's an opportunity.