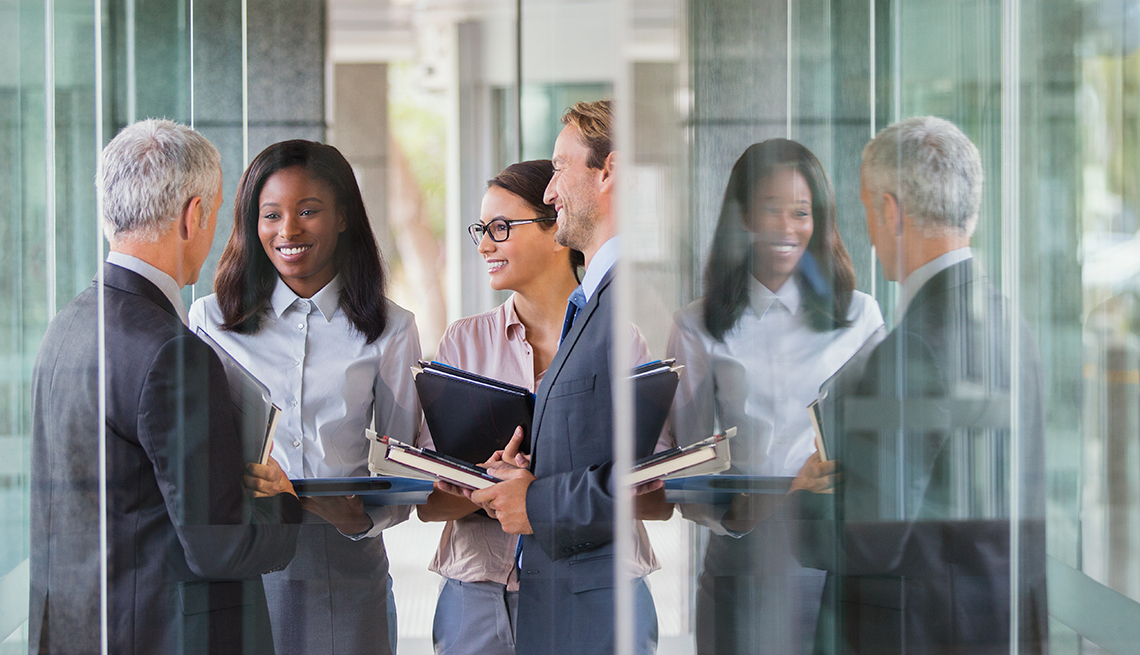 When it comes to getting a new job, social skills are more important than ever. According to a recently released study by the Pew Research Center, jobs requiring strong social skills — including interpersonal, communications or management abilities — rose 83 percent, to 90 million jobs from 49 million between 1980 and 2015. What's more, compensation has increased for positions demanding higher social skill levels. Over the past 25 years the average pay for such jobs has risen from $22 to $26 an hour, adjusted for inflation.

That's good news for experienced workers who've spent years honing those skills. Shelly Horan, a 51-year-old Houston resident, recently landed a new gig as a marketing associate for a local IT security, audit and compliance firm thanks to her robust social repertoire. She was co-owner of Thunder Roads Texas Motorcycle Magazine from 2007 to 2015 before having to shutter the publication this year. "My new job calls on my networking skills and my heavy background of visiting companies and acting as a company representative," she says.

Kathy Seybolt, 58, of Windham, Maine, also drew on her interpersonal prowess to help her climb the corporate ladder. She moved from the finance department to human resources and now works as a talent acquisition manager at Goodwill Industries of Northern New England.

"I went from working mostly alone to going into the public to talk to people about their hopes, dreams and career goals," Seybolt says. "I've gotten to exercise my soft skills rigorously since the promotion. Soft skills are an important part of professional development that can get you ahead."

The Shift to Social

Many jobs today demand strong people skills because of the changing nature of the market, says Kim Parker, director of social trends research for Pew Research Center in Washington. "The shift away from a manufacturing economy to a service-oriented, knowledge-based economy has increased the demand for occupations where these skills are required," Parker says.

Mitchell Langbert, who teaches human resources, business and managerial skills in his classes at Brooklyn College School of Business, agrees. "Interpersonal skills have increased in importance due to the increasing share of the economy devoted to services and information," Langbert says. "Processes that were once done manually are now done by computers, and demand for human labor increasingly involves providing services in health care, retail, sales, education and dealing with customer complaints."

Vicki Salemi, a career expert for the job search and career advice site Monster in New York, says that in her previous position as a corporate recruiter, a hiring decision often came down to two candidates who had nearly identical résumés. The person who almost always landed the job was the candidate who demonstrated stellar social aptitude because they were more likable and engaging in conversation and appeared confident and comfortable. Strong social skills were the most important quality for candidates to have, especially in hot fields like hospitality, retail and health care, she says.

In many cases, social skills are honed with age. "Older people have more experience, so their interpersonal skills are more seasoned and lack the rough edges of younger people," Langbert says.

One in-demand skill that age 50-plus job seekers often wield more than younger competitors is social dexterity. "Companies want someone who's not only a stellar performer but who gets along with others, even difficult people," Salemi says.

Experienced job seekers can't just rest on their laurels, however. They have to be willing and eager to learn fresh skills and sharpen old ones. About 4 in 10 workers age 50 and older say that, in order to keep up with changes in the workplace, it's essential for them to develop new skills throughout their careers, says Parker, citing Pew research. She adds that many experienced workers are highly motivated to learn new skills to stay relevant.

Jeanne Meister, New York-based coauthor of The Future Workplace Experience: 10 Rules for Mastering Disruption in Recruiting and Engaging Employees, says it's a no-brainer that 50-plus job hunters should be applying for positions that require strong interpersonal skills. You can start the process by sharing your employment goals on social networks like LinkedIn, Facebook and Twitter, and consider joining external groups like Meetup.com.

Of course, it's not enough to simply possess strong social talents — you have to convincingly demonstrate them through your résumé and in job interviews. "Candidates should emphasize their social skills in an executive summary at the top of their résumé," Salemi suggests. Before any interviews, prepare some examples to illustrate those skills.

For example, maybe there was a conflict in the office and you defused it, or maybe as a manager you boosted productivity by 200 percent among your team, suggests Salemi. "How did you do it? What did you say to accomplish it?" Those stories could help land you the job.