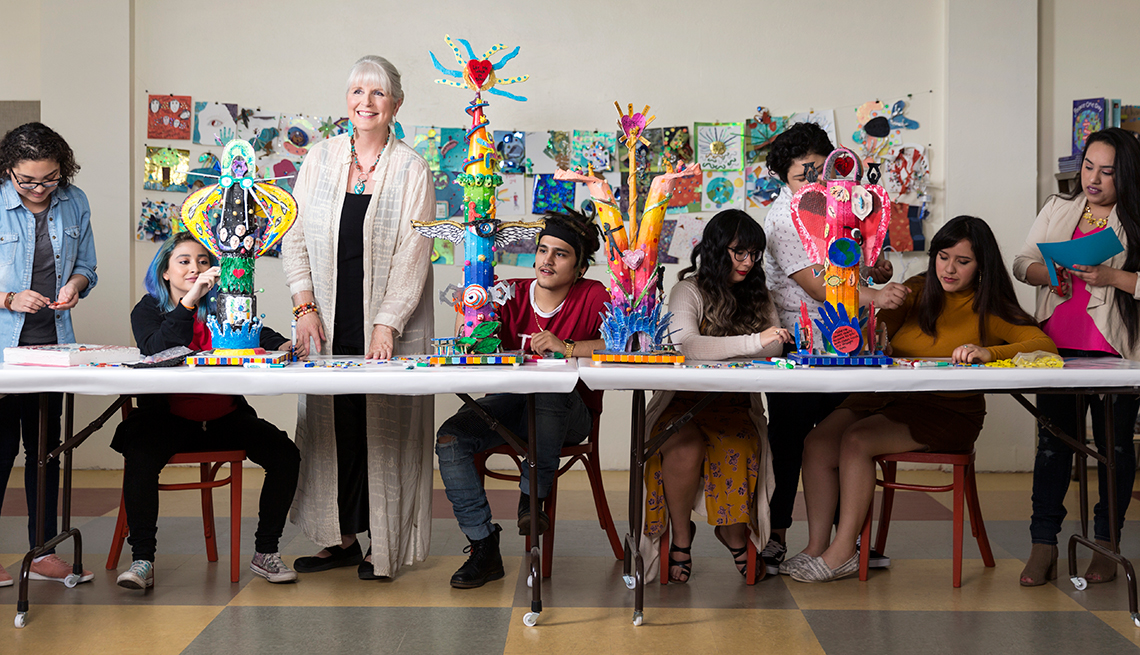 From Artist/Activist to Arts Foundation Director

En español  | Her work was was born of tragedy. In 2000, a young man was murdered in front of Blessen's house in Dallas, and she was haunted by society's seeming indifference to violence. In 2005, at 53, she launched a nonprofit, using her skills as an artist to advance nonviolence through works of art and arts education.

Blessen, cofounder Barbara Miller and other volunteers established 29 Pieces, named for 29 large sculptures based on phrases from sacred passages. They developed an art-based, hands-on curriculum for students that promotes compassion, conflict resolution and analytical thinking, and taken it to thousands of students.

Within a few years, Blessen was receiving enough support that she could be paid a small salary and scale back her work as a journalist and illustrator. It's been a rewarding, if nerve-racking, way to earn a living. "There haven't been more than a few days that I didn't worry if we were going to make it," she says.

She has even become a job creator: 29 Pieces now has three part-time employees and numerous paid contractors, many who started as volunteers.

Her advice: Learn the organization's culture so you can see where you fit in. Some nonprofits are relaxed, while others are more corporate, Blessen says. Finding one that fits your style will increase your chances of landing a paid position. 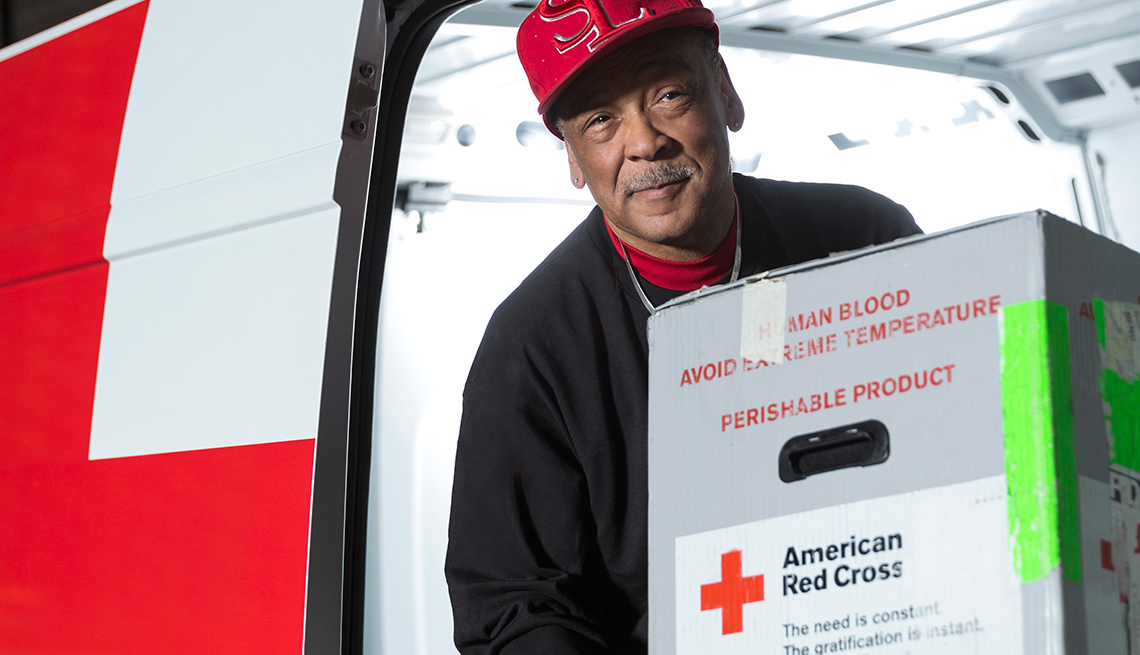 Michael Johnson, a former volunteer, was hired by the Red Cross in St. Louis.

From Landscaper to Blood-Donation Courier

Johnson started volunteering at the American Red Cross, doing maintenance and landscaping. He came to the charity at the suggestion of AARP Foundation, where he'd gone for counsel about how to supplement his Social Security income.

Working as a volunteer allowed Johnson to see what the organization was about, he says, admitting, "I never would've thought about the Red Cross for a job." During his year of volunteering, he watched the jobs board at the Red Cross office and eventually saw a listing for couriers who transport blood donations to testing centers at night.

Those in charge of hiring for the role were already familiar with his work ethic: "They could see that I show up when I'm supposed to, and I do the job." A day after applying, Johnson was hired; he has had the job for two years. "It's perfect," he notes. "With the added income, I'm able to live better and even put on a bit of fat."

His advice: Volunteering at larger organizations such as the American Red Cross and The Salvation Army is more likely to lead to a paid position because they have such large paid staffs. 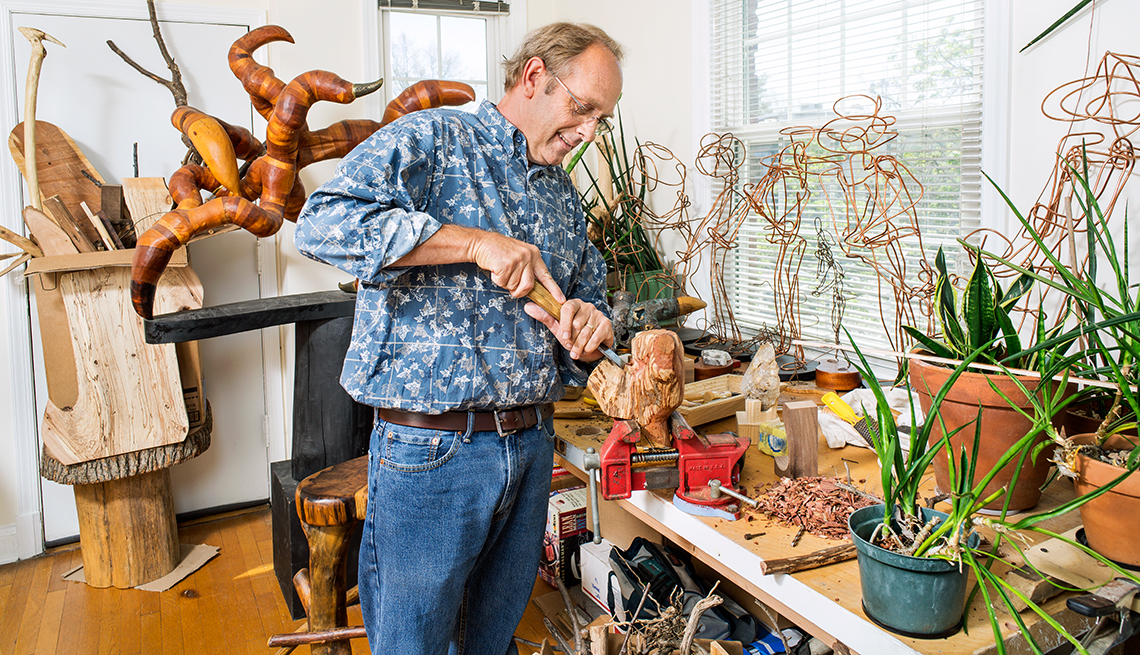 Once a volunteer handyman, Danny Robbins turned his and carpentry skills into an ongoing job at the Smithsonian.

From Unpaid Handyman to Paid Artist/Cabinetmaker

While in Washington for his wife's yearlong teaching fellowship, Robbins heard that the Smithsonian Institution offered volunteer opportunities. Robbins started in 2010 and took to the tasks—which, for the artist with carpentry skills, included everything from sweeping floors to making new cookies for the Cookie Monster on display at the National Museum of American History. "The public breaks a lot of things," Robbins says. Then, when the museum had a temporary paid position open with similar duties, his experience as a volunteer helped him land the gig. That "temporary" job has now stretched out several years, even as his wife has moved to other jobs in the area.

His advice: Be patient, and enjoy the journey. "Volunteering opened my eyes big time—it was totally rewarding in and of itself. But little by little, I showed them what I could do."

5 Tips to Land a Paying Gig

1. Pick employers with large paid staffs. This will increase your chances of ultimately landing one of those jobs.

3. Lend your expertise. If you have specialized training—as a carpenter, lawyer or anything in between—volunteer where your skills will be valued.

4. Treat it like a job. The organization may not be paying you (yet), but you'll be regarded as a professional if you reliably show up on time, ready to work.

5. Network. Get beyond your volunteer coordinator and interact with workers, and hirers.

Two jobs have come to Larry Williams after he offered his services for free. The first was in the 1970s, in the small Kansas town of Herington. "I signed up for the volunteer fire department," Williams says. In addition to helping him make friends, it meant he was among the first to know when the town's emergency-services unit needed a new weekend dispatcher. He landed the paid weekend gig, while continuing to work his construction job during the week. Years later, as Williams began planning to retire from construction, he asked if he could help at a federally funded training center in Manhattan. "I'm very passionate about trade skills," he says. "We've lost generations of those skills as we've emphasized college."

His enthusiasm earned him an offer to give the commencement address to this year's graduates, and then to substitute teach for pay at the center. He expects to begin teaching as a paid, part-time instructor at the center soon.

His advice: Search for ways to put your hard-earned skills to good use, even for free. "Get off the recliner and volunteer. You've got to have a reason to get up in the morning."