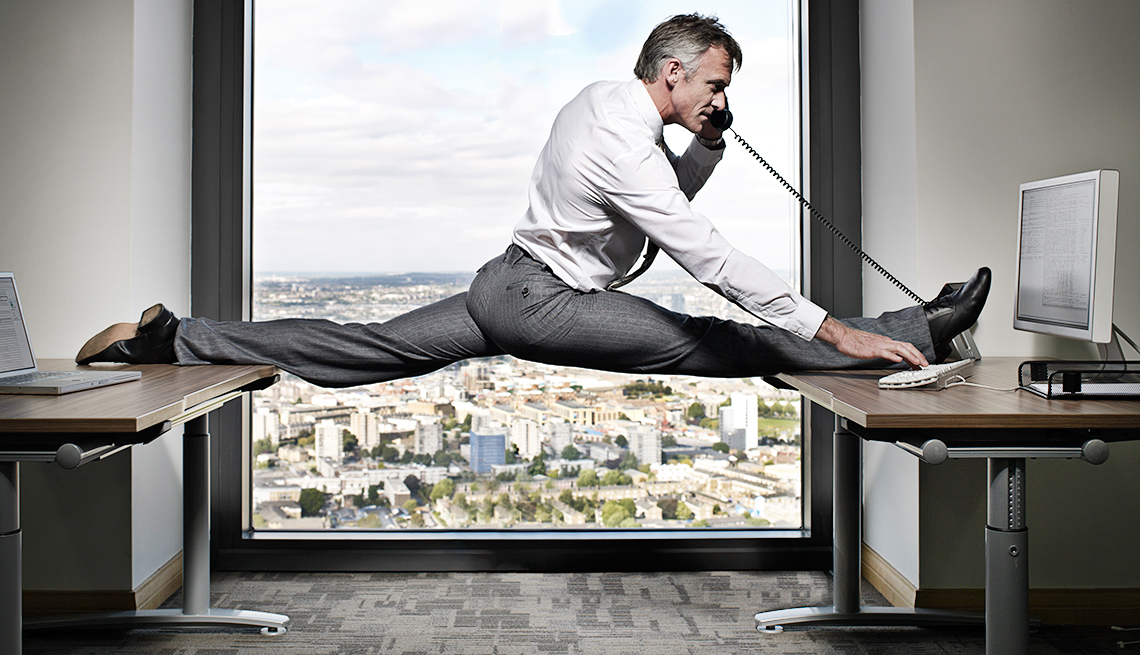 Learn which gadgets and equipment can really keep you fit and healthy at the office.
Getty Images
By:
AARP
Apr 12, 2017

The days of typing at your desk in a stationary chair for eight hours may be vanishing. Workplace health products are all the rage, from standing and treadmill desks to wearable pedometers and posture trackers. But does reviewing quarterly reports while walking in place really burn enough calories to move the fitness needle? How about using an exercise ball for a seat? Or a foot pedaler under your desk?

We spoke to ergonomic and wellness experts about the hottest health gizmos populating today's workplaces. They told us which can improve your health, which could compromise it and which might have little to no effect.

We've all been warned that sitting is the new smoking. Desks that give you the option to stand certainly can help you avoid sitting all day long. A 2016 University of Iowa study shows that given long-term access to sit-stand desks, workers will stand an hour more during the workday than those who use traditional desks. And that means more calories burned, however minimal, says Lucas Carr, an assistant professor of health promotion at the University of Iowa who contributed to the study.

But a new analysis of 20 studies on sit-stand desks and their sexier offshoots, treadmill and bicycle desks (see below for more on them), casts doubt on their benefits. Researchers with Cochrane, a London-based health care think tank, found little concrete evidence that adding the ability to stand, walk or pedal at one's workstation increases a person's overall health in the long term.

Scientists do agree that, much like sitting, standing for long periods taxes the body. Risks include fatigue, back pain and varicose veins, says Alan Hedge, ergonomics professor at Cornell University.

So what's the solution? Regardless of whether you use a standing or exercise-friendly desk, movement throughout the day is key. Based on his research, Hedge recommends sitting for 20 minutes; standing for eight minutes; walking, stretching or otherwise moving for two minutes; then repeating the cycle throughout the workday.

Skepticism of the ability of treadmill and bicycle desks to benefit worker health in the long run might have something to do with the type of work being done at these desks.

"It's difficult to type or mouse and walk at the same time," Hedge says. "The brain has trouble coordinating conflicting movements. It's not an effective way of working."

Research shows that we compromise accuracy and speed if we try to create a PowerPoint or edit a quarterly report while walking or pedaling, Hedge says. Thus, you're forced to either cut back on the exercise or sacrifice working efficiently.

That said, Carr's research has found that workers with bicycle desks do get 50 more minutes of activity throughout the workday. So while you probably won't get in a full cardio workout, the extra activity could improve your health. And if you're only talking on the phone, reading or watching a video, you'll be able to pedal or walk faster.

Just because a mouse or keyboard is marketed as ergonomic doesn't mean it will be good for you. "What you are doing with your computer should determine what kind of input devices you have," says Ian Chong, principal at Seattle-based consultancy Extreme Ergonomics.

For example, people who spend much of their day clicking a mouse may find a trackball more comfortable, especially if they've developed tendonitis in their index finger from all that clicking, says Chong, a certified professional ergonomist. Likewise, those who answer mountains of email can greatly reduce strain on their shoulders, arms and hands by using voice recognition software like Dragon.

No matter which tools you use, keeping your hands as flat and straight as possible is imperative, Hedge says. For this reason, he warns against keyboards that prevent your wrists, hands and forearms from remaining in a neutral position as well as gimmicky items such as vertical mice and wrist rests.

Although an exercise ball can be a helpful fitness tool outside the office, studies haven't yet shown a real fitness benefit from sitting on one at your desk. "They're great if you want to do Pilates, but you don't do Pilates eight hours a day," Hedge says.

The biggest problem with exercise balls may be that they don't provide any back support. Next to lying down, the best position for your back is sitting in a comfortable chair with ample back support, Hedge says.

Just be sure to adjust your office chair to fit your frame. "There are all these bells and whistles on chairs now, most of which people tend to not use," Carr says. "They tend to adjust their chair once and leave it for several years."

If you wear progressive lenses, your eye doctor has probably recommended getting a different pair of prescription glasses solely for computer work. Wearing progressives or bifocals while using your computer can cause you to tilt your head backward to see the monitor, which can cause chronic neck pain, Chong says. So there's real merit to springing for the extra pair of glasses for work.

If you suffer from computer-related eye strain or headaches, consider adding light-blocking, anti-glare tinting to the lenses of your computer glasses, Hedge adds. Doing so can reduce strain and clarify your view of the screen.

Dozens of activity trackers now crowd the health and fitness market (think Fitbit, Jawbone and Garmin's Vivofit). These devices are great for determining how much and how vigorously you move throughout the day, Carr says. And a 2007 Journal of the American Medical Association study revealed that pedometer users increased their activity by 27 percent, he adds.

But a 2014 study by Boston-based mobile consulting firm Endeavour Partners found that a majority of adults who own an activity tracker don't use them and that one-third abandon them within the first six months. This is often the point at which the novelty wears off, Carr says. Or it may be that the device stopped working or got lost, and the user found it too bothersome to replace.

The missing link, Carr stresses, is goal setting and wellness coaching. A 2016 Indiana University study backs this up. The study paired workers with student coaches who helped them develop and increase their exercise goals over a 10-week period. Ninety percent of participants said that the combination of activity trackers and the coaching helped them keep to their plan even after the coaching ended.

Cousins to activity trackers are wearable devices like Lumo Lift and Upright, which "train" you to improve your posture throughout the day and give feedback on how well you did. When affixed to your body or clothing, these small sensors will gently vibrate if you begin to slouch.

"For someone who may have poor posture and is looking to make improvements, it can be a good tool, as long as that tool is combined with some effective behavioral counseling," Carr says. But if you fail to make a permanent change to the way you sit and stand, you won't reap the benefits of the device and will have wasted your money.

Even the most beneficial health tool won't move the needle if you abandon it after several months or use it incorrectly. Sit in a $1,000 ergonomic chair but neglect your posture, and you could wind up in worse shape than when you started.

Likewise, a product that works well for one person may not for the next, depending on their height, preferences, previous injuries and job duties. "The best option is one that you will use and that makes you feel good throughout the day," Carr says.

Finally, if you're worried you're not moving enough at work, you don't need a pricey piece of equipment to make a change. Remember: Standing, walking and stretching are free.