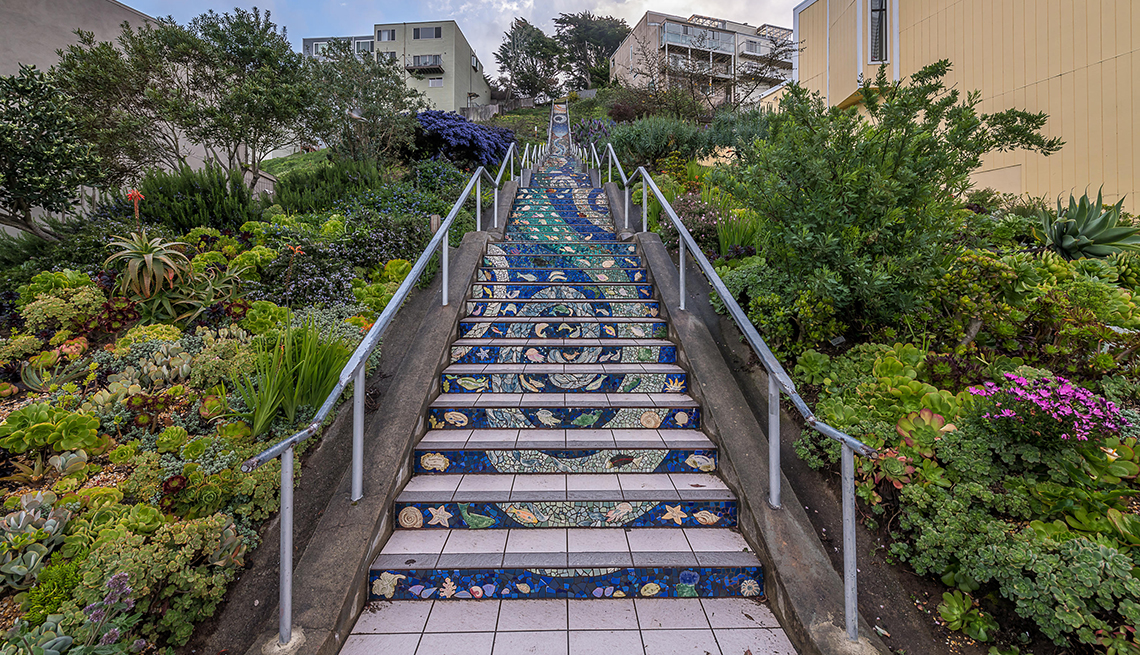 En español | The many hills of San Francisco may present challenges to walkers of all ages, but they’re worth the climb for their lofty views of the city and surrounding San Francisco Bay. Knowledgeable locals maneuver from one street level to another on the more than 600 public stairways that provide shortcuts, urban and wild vistas, and a peek into city life, both public and private, in nearly every neighborhood.

Make sure these five favorite San Francisco steps are on your list:

If there’s such a thing as a starter staircase in San Francisco, the one-block Calhoun Terrace stairway is it. Begin just past the intersection of Union and Montgomery streets, in the Telegraph Hill neighborhood. A sign announcing that the stairs dead-end will affirm that your journey will be short; your path passes through green gardens carefully tended by neighbors. At the top, breathe deeply as you enjoy the view of the Bay Bridge and Yerba Buena Island in the slate-blue San Francisco Bay.

Neighborhood: Telegraph Hill. At the foot of Telegraph Hill, the terrain flattens out as you approach the bay. Take a break in Levi’s Plaza  —a swath of green amid the office buildings two blocks away — or find a seat at nearby Pier 23 Cafe on the Embarcadero, where you might enjoy a hearty lunch of ceviche or fish tacos within a few feet of the bay.

Neighbors banded together to lay the mosaic tiles in these steps in the Inner Sunset with a sea-to-stars theme. Located on Moraga Street, between 15th and 16th avenues, the entire flight is broken into small sets of stairs with landings. So walkers can take all the time they need to look at the contributors’ names on select tiles along the way or special messages like “Let’s Fly” on a hummingbird tile. If climbing seems too much, park near the top of the path on 15th Avenue and gaze down the hill, across the entire Sunset District. If you want more climbing, a short distance away are the Hidden Garden Stairs, with more colorful mosaics, at Kirkham Street and 16th Avenue.

Neighborhood: Inner Sunset. This residential neighborhood with stucco homes that, beginning in the late 1800s, sprang from sand dunes has a handful of quiet parks that are ideal for enjoying good weather and a picnic. And part-landscaped, part-forested Golden Gate Heights Park is a local favorite for solitude and city panoramas that include the Pacific Ocean and Western neighborhoods. The best picnic supplies can be found at Arizmendi Bakery and Andronico’s supermarket, both within four blocks of each other near Irving Street. 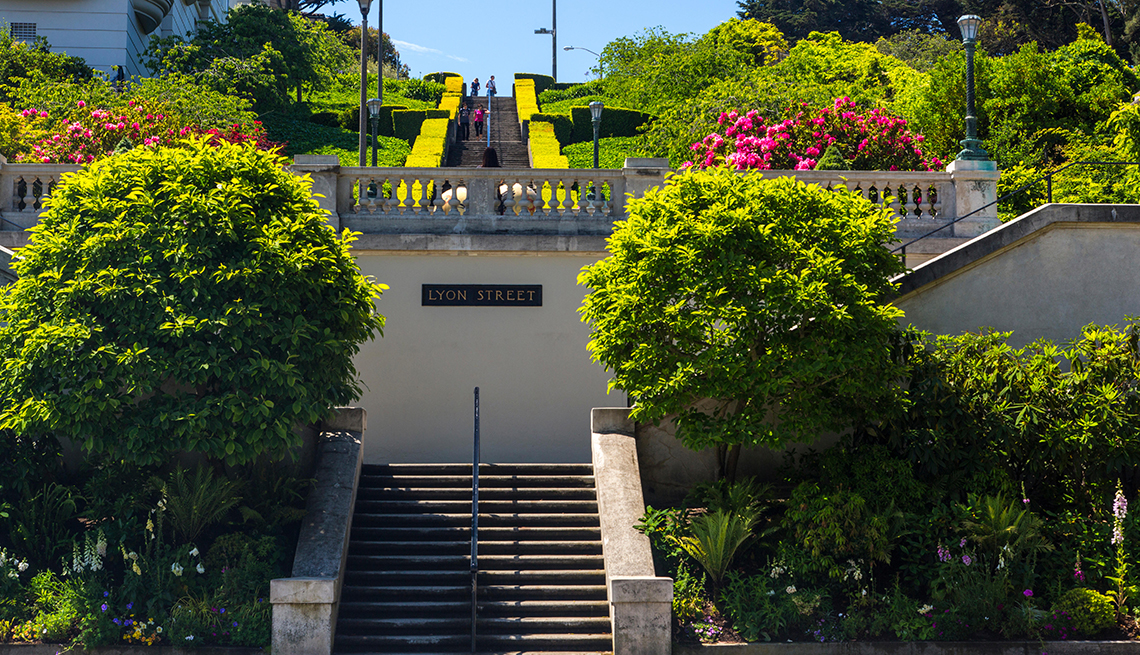 These wide and well-maintained steps that cut through tiered public gardens are a lure for fitness fanatics. And the way they sweep from the tony Pacific Heights neighborhood at one of the highest elevations in the city down to the broad expanse of the Cow Hollow and Marina neighborhoods makes them one of the best spots for a first-class view of San Francisco Bay, including the majestic Golden Gate Bridge and the domed Palace of Fine Arts, constructed for the 1915 Panama-Pacific International Exposition. Access them at the intersection of Lyon and Broadway streets, and as you descend, be sure to pause in the middle at one of the Hearts of San Francisco — an annual public art installation that benefits the San Francisco General Hospital Foundation.

Neighborhood: Pacific Heights/Cow Hollow. This stairway is located just outside the Presidio, a former army base that's now part of the Golden Gate National Recreation Area. It’s a natural oasis with a rich history, art installations, military buildings in the Main Parade Ground, and great spaces and restaurants — from little cafes to family-friendly grills to old-school American dining — for a break between it all.

This spot in the Castro and Corona Heights neighborhoods offers a look at a slice of San Francisco’s quirky residential life. Nearly all the houses along this tucked-away stairway (whether Victorian or of more modern design) are accessible only by foot, which means that residents use the steps every day. As you wander through the serene scene with beautifully maintained gardens, you may be tempted to take a seat on the stairs to spend more time here. For the return trip, find the nearby Saturn Street Stairs, a block south, to do a full step circuit.

Neighborhood: Castro/Corona Heights. Situated just below Twin Peaks, one of the seven San Francisco hills (of the city’s 48 named hills) claimed to have been named at the time of the city’s founding, these neighborhoods have a live-and-let-live vibe. The Castro, which flies a behemoth rainbow flag, embraces its status as the epicenter of the worldwide LGBTQ community. But it also offers interesting shopping at Cliff’s Variety store and a mix of restaurants and cafes when a break from exploring is desired. If you don’t mind additional ascension, head to Corona Heights Park to see the city stretched out beneath your feet, or visit the Randall Museum and its hands-on exhibits of science and nature.

This extreme flight is among the most famous in San Francisco, and hard-core adventurers and athletes use it to train for races. On the journey uphill to Coit Tower, the stairs wind through well-tended gardens, past Art-Deco apartment buildings, and offer a variety of city panoramas. This area is also home to the wild parrots of Telegraph Hill, made famous in a 2003 documentary film, so keep your eyes and ears open for them. When you head downhill, do so on the Greenwich Street Stairs, which also top out at Coit Tower.

Neighborhood: Telegraph Hill. Even if you skip the steps, you can drive up to the parking lot at Coit Tower, the fluted column atop Telegraph Hill (one of the original seven hills named). It stands, thanks to Lillie Hitchcock Coit, a San Francisco eccentric who willed one-third of her estate to the city. Inside, mural paintings of various sizes depict life in California during the Great Depression — with scenes spanning from agriculture and banking to streetscapes and home life — and were created by artists employed under the Public Works of Art Project, a precursor to the Works Progress Administration (WPA).