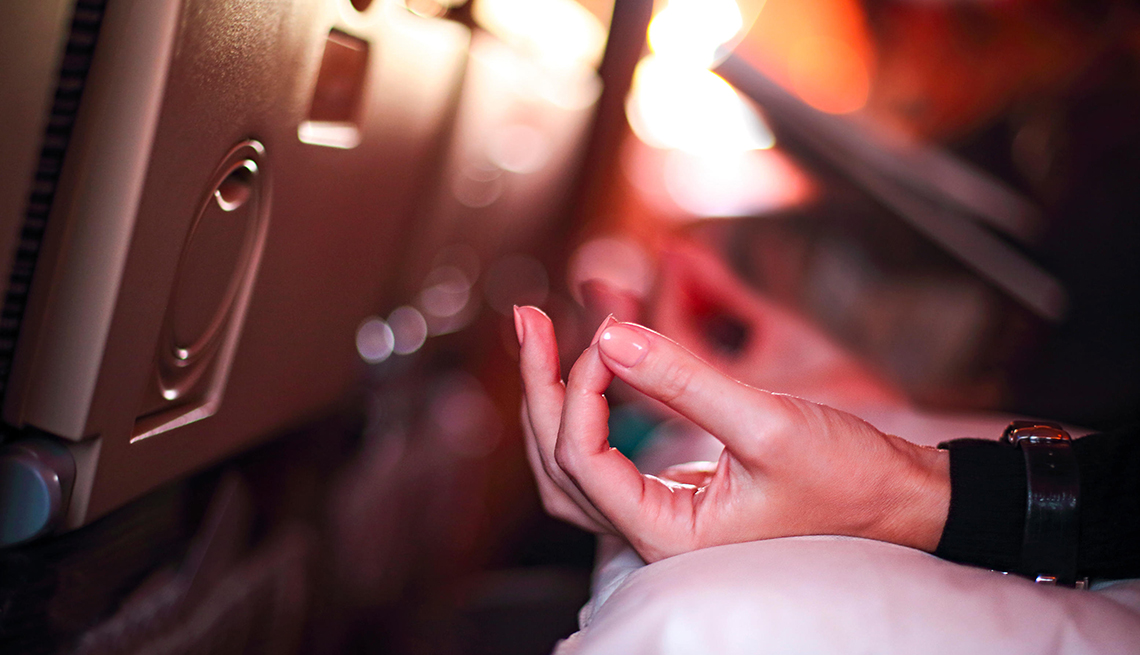 En español | You’re on a plane when the bumps and jolts of turbulence start up — maybe just as you’re trying to enjoy your drink or make your way back from the bathroom. Most turbulence passes in minutes, and it’s extremely unlikely to be a precursor to disaster. But for those who dread it, a bumpy ride can turn a peaceful flight into a nerve-wracking ordeal. Fortunately, pilots and psychologists agree that it’s fully possible to banish your fear at 30,000 feet. Here’s how.

“If you don't understand turbulence, it can be frightening,” says pilot and aviation consultant Barry Schiff. Turbulence occurs as a result of irregular airflow, which can happen for many reasons, including geography (like flying over a mountain range), jet streams, weather fronts and more.

“Turbulence can be a little uncomfortable, and it can sometimes be a little unexpected,” Schiff says. “But rarely is it dangerous.” Bumpiness during a flight doesn’t mean that something is wrong with the plane, and it's usually easy for the pilot to adjust to it. Schiff compares flying through turbulence to navigating choppy water on a lake: In both cases, slowing down can reduce how intensely the choppiness affects the machine.

Situations that can result in severe turbulence, such as thunderstorms, are ones that pilots studiously avoid. In 34 years of flying for TWA, Schiff never flew through a thunderstorm, even though he encountered many. Pilots use a variety of tools and techniques, including radar technology and communication with air traffic controllers, to navigate around bad weather.

And even if you imagine the plane is about to flip over in the sky, it’s just not going to happen, experts say. Today’s commercial aircraft are designed to withstand even the harshest of conditions. In fact, turbulence doesn’t cause planes to be thrown around in the first place. “People will have the sensation that they are gaining or losing altitude because of the way you come up out of your seat a little bit or are pressed down into your seat,” Schiff says. “But the reality is that the altitude of the airplane doesn't change very much at all.”

While extremely unlikely, injuries because of turbulence are possible — typically from being thrown unexpectedly, which is why heeding the seat belt sign is so important. In 2017, the Federal Aviation Administration reported 17 turbulence-related injuries to passengers and crew, down from 44 the year before. (Fatalities and crashes due to turbulence have also occurred, but only a handful of times in the last few decades.)

And remember that plane crashes, in general, are exceedingly rare, and deaths even more so. You are more likely to die from lightning, food poisoning or a shark attack than in a plane crash. Translation: The bumps you feel on a flight — except in a tiny fraction of instances — are a normal part of in-flight turbulence and not a sign that your plane is about to go down.

Still, knowing that turbulence is almost always normal doesn’t always take away anxiety when you start bouncing around above the clouds.

According to psychologist David Carbonell, fearful passengers can experience a range of unpleasant in-flight symptoms, from clenching the armrest and holding their breath to bursting into tears. Flyers might struggle with disturbing “what-if” thoughts or rely on alcohol or prescription medication to get through a flight.

It's all about control, Carbonell says. “Fearful fliers aren’t afraid of crashing,” he says. In many cases, “they’re afraid of getting afraid.” Carbonell advises his clients to take note of their symptoms beforehand and actively check in with themselves throughout their flight. This way, he says, you’re working on managing your responses to fear (which you can control) rather than the fear itself (which you can’t, or at least not as easily).

In extreme cases, when anxiety causes a real panic attack, Carbonell suggests the sufferer focus on breathing. “The first thing you need to do is sigh,” he says. Exhaling helps relax the muscles of the upper body. From there, you can start to breathe deeply, avoiding the shallow breathing that makes panic worse. Distraction techniques (such as trying to conjure up memories of a beloved family pet or forcing yourself to write your name with your nondominant hand) aren't likely to do you much good once the panic sets in.

If you’re merely feeling uneasy about the prospect of turbulence, however, it can certainly help if you're able to get genuinely absorbed in an activity — reading a book, watching a movie or using a meditation app — at the start of your flight. This immersion, Carbonell says, naturally focuses your attention elsewhere. You may find that a bout of turbulence passes without alarming. Here's a tip from Schiff: Sit over the wings for the smoothest possible ride. (The back of the plane is where things feel bumpiest.)

Schiff suggests that anxious passengers take a cue from the crew, who are likely to be unfazed by a little bumpiness. “Turbulence doesn't really bother us,” he says, “unless we're holding a cup of coffee.”

Foods to Avoid Before Flying