Volunteer with AARP Foundation Tax-Aide and enjoy connecting with people in your community. Learn more. 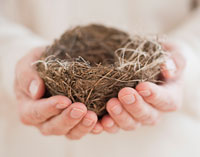 En español │When it comes to the nuclear family, I'm hopelessly sentimental. I spent the whole summer before I went off to college mourning the fact that our family would never be the same. If my parents were feeling the same way, they hid it well, or at least I didn't notice, and my younger brother was downright hostile to my proactive nostalgia. "Get over it," he said simply.

Then, about two hours after they had unpacked the car and trudged upstairs with my boxes of possessions, I dismissed my family with a single wave. My mourning more than accomplished, I was ready to launch into my new life.

Thirty-seven years later, I did exactly the same thing. I spent months stewing in the sadness I would feel when I dropped my youngest child off at college. Then, when we rolled onto campus, and were welcomed by a crowd of vuvuzela-tooting kids in crazy costumes, I felt my mouth involuntarily assume the shape of a smile. After all, we were dropping our son off at a nice Northeastern liberal arts college — not Afghanistan.

Colleges these days coddle boomer parents in a way that was unthinkable in the '70s when I went off to college. My husband and I received parent orientation schedules and maps at check-in, and were invited to a day's worth of events, including a barbecue and a big tent reception, before we were expected to say our goodbyes. There was even a post-goodbye session with members of the college counseling staff on "navigating the road ahead." At my college drop-off, my parents weren't offered so much as a cup of coffee.

Yet somehow, even before the tent party was officially over, I was ready to leave. We posed for one last picture with our college boy, allowed him to walk us to the car and decided to skip the "navigating the road ahead" workshop in favor of getting on the actual road. It was, after all, a four-hour drive.

Although we took the express route up, we took the slow road home. On the way out of town, we looked in some little shops. About an hour later, we stopped at a farm stand for fresh corn. Three hours out, we pulled over to a local restaurant and had a leisurely dinner. And right before getting home, I asked if we could stop at the grocery store for my favorite specialty soda drink, and my husband indulged me. Was this a sign of aging, this leisurely pace, or was it simply the luxury of only having to negotiate with one other person?

The whole evening we eyed each other, my husband and I, for signs of imminent breakdown. I expected it more from him than from myself. After all, he was the one who had that whole Y-chromosome thing in common with our son. He was going to be the one to miss the baseball chatter. Besides, despite my proclivity for advance sadness, I'm not much of a crier.

In bed, later that first night, the tears suddenly poured out — of me. He's such good company, our son. Smart, funny, extraordinarily well-mannered. It wasn't, in the end, about the splitting of the nuclear family or the fact that this milestone advanced us inexorably toward the end. It was about missing a good pal.

Debbie Galant is the founder and co-owner of Baristanet.com, a pioneering local news site, and the author of three novels, including Cars From a Marriage.