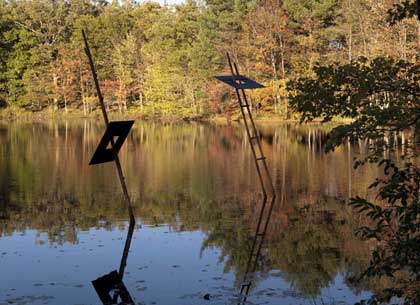 Floating memorials, such as this one at the I-Park retreat, are popular because many cultures believe in setting the soul free in water.

Art is life, it is said. A New England artists' retreat wants to make it a part of death, too.

The I-Park retreat in East Haddam, Conn., plans to reserve some of its wooded 450 acres for a nontraditional memorial park called Thanatopolis, Greek for "city of the dead," where artists will create unique monuments that evoke or reflect the personalities of the departed.

The retreat's founder, Ralph Crispino Jr., came up with the idea in 1983 after he found himself dissatisfied with the traditional options available at a funeral home, monument dealer and cemetery upon the passing of a close friend. He believed "there needed to be a greater role for creativity and personalization," according to an I-Park brochure.

Grieving survivors, particularly boomers who belong to the "do your thing" generation, have introduced innovations into final rites at funerals and memorial services. Some people are being buried in "green cemeteries" where unembalmed remains and biodegradable caskets can decay into the earth. Crispino, 59, has a vision for an altogether new kind of cemetery.

At Thanatopolis, there will be no graves or burials. Instead of headstones, individualized sculptures planted in gardens or afloat on a pond will endure as living memorials. "Memorial totems" will provide niches for cremated remains.

What will these artful memorials look like? In the first round of experimental commissions that I-Park has unveiled — all intended to be temporary installations — floating memorials were popular. Nearly half of the dozen artworks were placed in the pond at the retreat.

One features two clear glass spheres, tethered together, each with a small mast and single sail. It is called "Twins." A broken wooden boat parked halfway ashore honors a community of boat builders. Another memorial uses flat pieces of wood as tiny rafts, with colorful feathers as sails.

"Different cultures believe in setting the soul free in water," explains artist Carolina Rubio MacWright, a Colombian immigrant who lives in New York City. "It's a way of letting go. We should deal with new ways of dealing with the idea of losing somebody and celebrating their life."

MacWright, 29, created the miniature rafts with the interment of her grandfather's remains in mind. "When my grandfather died, we took his ashes out on his favorite lake where he liked to fish" in Colombia, she recalls. "It really marked me."

Nhan Duc Nguyen, a Canadian artist, drew upon animist traditions in his native Vietnam in designing a shrine to honor a widow who sold traditional beef noodle soup in his hometown. She disappeared after the fall of Saigon in 1975 at the end of the Vietnam war and is presumed to be dead.

A colorful array of paper flowers climbs five feet up a tree trunk, surrounded at the base by an assemblage of plates covered with breads, candies and animal figures. A recording plays Southeast Asian music that Nguyen, 43, describes as "a mix of calling up spirits and venerating your ancestors." Another audio plays at the same time, with interviews of Vietnamese restaurant workers in North America. Nearby, tea lights burn in a row of soup bowls representing the widow's occupation.

Other memorials are more conceptual. One stretches three pieces of fabric between trees, forming an abstract bird intended to symbolize the ability of mourners to free themselves from grief by recalling pleasant memories of the deceased.

Music for the soul

None of the temporary installations appears designed for the actual storage of remains — the kind of "memorial totems" that were one of two options for artists. I-Park plans to construct a new type of outdoor columbarium, or repository for cremated remains, possibly within a garden setting.

Other nontraditional memorial parks exist around the world, but none does as much individualizing of memorials as is being contemplated for Thanatopolis.

Comparable models circulated during a July symposium at I-Park, including Igualada Cemetery in Spain, created in the 1980s, which features a curving, sunken path carved into a hillside, with concrete burial chambers on the embankment. A similar hilltop design has been made for a cemetery in Urbino, Italy. The Oakland Columbarium in California, established in 1909, has always been exclusively for the interment of cremated remains.

The Lien Foundation, a philanthropy in Singapore, has sponsored an international competition to design personalized "Happy Coffins" for hospice residents. Ghana in West Africa has a long tradition of customizing coffins to reflect a person's characteristics or interests.

Thanatopolis is likely to incorporate music and performance in ways traditional cemeteries do not. In addition to memorial designs, there were competitions for musical compositions and mime performances.

Music reflects a personal interest of Crispino, the visionary behind Thanatopolis. When his close friend died in 1983, he defied tradition by playing a saxophone in the funeral home where the friend's body lay in a casket for viewing.

Kenneth J. Cooper is a writer in Boston.