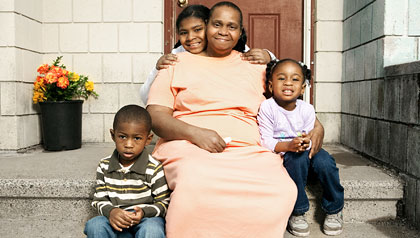 Carolyn Jackson, with her three grandchildren, is a strong advocate for issues affecting grandparents who are caring for grandkids.

Founder of Grandparents on the Move, New Haven, Conn.

En español | When Carolyn Jackson started Grandparents on the Move (GOM), a support program for grandparents who are caregivers, she was struck by the overwhelming financial, legal and educational needs that the caregivers required. She soon learned firsthand how challenging the situation could be: Family troubles resulted in her raising her own three grandchildren. That redoubled her efforts to work with other grandparent caregivers. After several years, she raised enough money to take groups of grandparents to Washington, D.C., three times to attend national “GrandRallies”  on Capitol Hill. These rallies sought to raise awareness of issues affecting grandparents who are caregivers.

Stories Straight From the Heart. Read

As a former educator, Council on Aging director and founder of SCAN, an adult education program, John Wanat knows the importance of education and intergenerational relationships. When Wanat's grandson Johnny was born, he became very involved in the child’s education. Along the way, he realized that many children don’t have family support for learning, which he believes has made all the difference for Johnny. That belief led him to become New Jersey state coordinator for Generations United's Seniors4Kids program, mobilizing other grandparents across the state to support funding for prekindergarten programs.

Co-founder of the National Committee of Grandparents for Children's Rights, Albany, N.Y.

In 1995, Brigitte Castellano's daughter was killed by a drunk driver. Though her daughter and grandson had been living with her, the child’s father went to court and got custody. Through the ensuing court battles and heartbreak, Brigitte reached out to other grandparents in similar situations and, together, they worked to pass the New York state Grandparent Caregiver Rights Act, which mandates courts to consider grandparents in custody decisions and notify them if their grandchild is removed from his or her parent’s home. Her passion drove her to co-found the National Committee of Grandparents for Children's Rights, a national coalition that advocates for grandparents’ interests in custody and visitation laws.

Do you know grandparents who have become advocates, started a program, made a change in their neighborhood, community, state or at the national level because of their grandchildren? We'd love to hear your stories. Comment here or send a message to Amy Goyer.

When Carolyn St. Clair suspected that three of her four grandchildren had Fetal Alcohol Spectrum Disorders (FASD), she felt angry and helpless. So she set out to learn more about the various disabilities caused by prenatal exposure to alcohol. As her knowledge grew, she began offering workshops for at-risk families in seven states. Recently, she created We Stop FASD, a nonprofit organization whose mission is to increase awareness about the disorder.

Pat Owens has raised her grandson, Michael, since birth. Michael was 4 when she discovered he had an infant brother, but by then it was too late; the child was in the midst of being adopted by another family. Pat channeled her pain into advocating for a state law requiring authorities to notify relatives before placing a child for adoption and give family members priority if they want to raise the child. The law went into effect in 2005, but Pat kept pursuing her cause: She co-founded GrandFamilies of America and worked with others to have Congress enact federal legislation. In 2008, victory came when the Fostering Connections to Success and Increasing Adoptions Act, which includes notification requirements for all states, was signed into law.

Debbie Melching noticed something different about her grandson, Daylin, shortly after he was born. At 3, the child was diagnosed with Autism Spectrum Disorder (ASD) — a situation that prompted her to start an annual Autism Awareness walkathon to raise money to help pay for services for children with autism. She has also helped create an autism support group that offers respite and activities for the families.

Do you know grandparents who have become advocates, started a program, made a change in their neighborhood, community, state or at the national level because of their grandchildren? We'd love to hear your stories. Comment here or send a message to Amy Goyer.