You remember Paul Reiser. His affectionate dissection of married life on the sitcom Mad About You made us laugh at the foibles of newlyweds in the '90s. These days, the television icon is on to something else — parenting boys, 11 and 15, at age 54. And writing about it.

Recently Reiser talked to us about the joys of being a bad disciplinarian, his first taste of an empty nest, and why he won't be sporting a new baby on a magazine cover like so many other midlife Hollywood celebrities. 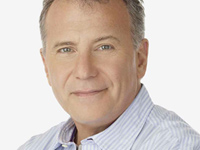 Q. What do you enjoy most, writing about fatherhood?

A. It's amazing that out of all the things in life, you don't get a practice round as a parent. No one says, "Well, this is the first kid, so we won't count this one." I've discovered there's a sort of a universal dread that we all fear at various times: That we are, perhaps, the worst parents in the world. Writing this book, it was comforting to realize we all feel that way. If you're doing it right, you don't avoid those periodic feelings of insecurity or panic.

Q. You write that you model some of your parenting style after your father.

A. One of the wisest things my dad ever said to me was when I screwed up on something as a kid. He said, "Listen, that's your job to try and get away with stuff and my job to try and catch you." And it was such a revelation, that he understood that.

A. Yes, and now I don't think I'm a great disciplinarian because secretly I'm rooting for my boys to win. When I lay down a rule and I see my kids cleverly dodge it or argue their way past it, I know I'm supposed to push back. But secretly I'm going, "Good for you! Well argued, you made your case, and I pity the next guy you go up against."

Q. And does your wife applaud their efforts too?

A. We're usually on the same page. We tell the boys they cannot drive a wedge between us, they can't play us one off the other, but they both do. One will come over to me and say, "Look, Mom thinks it's a bad idea that we watch this movie but we think you know we'd like to watch it, and you're a better parent." I know what he's doing but I kinda like being the better parent, so I can't go against that.

Q. You have the added concern of balancing your public life and private life. How do you do that while writing about your family?

A. It's interesting, I am a very private person and yet I make my mark by talking about personal stuff. The material is never meant to be literally autobiographical but it is certainly generated from my own life. So if you're reading this, it is not a story of my life but hopefully the story of many of us.

Next: Reiser's first taste of an empty nest. >>

Q. Do your kids mind being your material?

A. Oh, who asks them? The truth is my boys trust me enough to write about them, but I run it by them. Also sometimes details are changed or exaggerated for dramatic or comic effect.

Q. So your younger one wasn't embarrassed when you wrote that he is a master liar?

A. He was probably most proud of that — a notable accomplishment! I can't avoid embarrassing my kids. I remember specifically as a kid making a note of how embarrassing parents can be, and how I am never going to do that to my children. What I didn't realize until very recently is that you can't avoid it, and it's not even necessarily what you do — it's that, sometimes, your very existence is embarrassing to them.

A. A friend of mine told me this story: His kid, 14 or so, was playing Little League, and he texted his dad, "Dad, I forgot to bring a drink, can you bring me down a Gatorade." So his dad gets in the car with a Gatorade, he walks over to the bench, and the kid goes, "Dad, not here. You're embarrassing me." And he was like, "What? You asked me. How can I physically get it to you, unless I am alive?"

Q. Your older son is a baseball nut, has newly discovered girls, and is in a wheelchair. In the book, you share his amazing outlook on life.

A. He's quite a stunning young man. He sort of underlines this idea that hopefully children get good things from their parents, but their personalities are just theirs. My wife and I will look at both our boys and go, you know, where did he get that? Kids are these people that you get to help, and you have a vote, but in the end they are already on their own way to being whoever they're going to be.

Q. On that note, a couple of summers ago you got your first taste of empty-nest-hood.

A. Yeah, both boys went to camp at the same time. And I've heard the phrase empty nest, but only now do I have a feel of what that might be. It was so quiet. I also realized that so much of what I do as a father is really for me, even if I do it for them.

A. I found myself still checking their rooms at night, and it's not just 'cause I was missing them. Checking on them makes me feel like I have some function. Take them out of the equation and what am I doing? Well now I'm just a guy walking around a house. The truth is I just enjoy being patrol man and walking around, going, "Yep, I'm head of the castle!"

Q. Have you and your wife ever playfully considered having another?

A. No, no, and you know why? It doesn't take that much imagination to realize that while we all say, "Ohhhh, I love holding a baby," that's not all you get to do, you have to do everything else, too. When you go to a party with an infant, there is always some mother of a teenager who is so thrilled to hold your baby for you. I used to seek them out, just say, "Here would somebody take this kid? Because I'd like to eat my potato salad in peace."

Next: Reiser on being considered a boomer. >>

Q. There's something to be said for the potato-salad years. Tell us about the challenge of turning your kids on to old movies.

A. Yeah, well the victories are sweet, and they're surprising, when they end up liking the things that they do. The sheer technicalities of movie-making are so advanced now and older movies are slower, there's less editing, less action. My guys are used to Pixar and action movies. But they'll also surprise me — they'll watch The Sunshine Boys with me and really like it.

A. They both surprised me by liking The King's Speech. Of course, my little guy liked it because he got to hear the king curse. And that's all he took away from it: learning to curse like Colin Firth.

Q. Did he ask you what "fornication" means?

A. Can't even imagine it. Can. Not. Imagine!

Q. Do you consider yourself a boomer?

A. I've never really understood that term because I don't know that there was really such a boom. My sisters were born literally right after World War II, but I came years later. I guess I don't know what I am. I know I'm not an Xer or a Yer, that's for sure.

Q. And if you weren't busy parenting and writing, what would your ideal career be?

A. My dream has always been to slice cold cuts in a deli. First of all, it's secure, because there's always going to be someone who wants turkey. And just the challenge — it's not quite bungee jumping, but working that slicer, you know, there's an element of danger. And everyone's always happy to see you, I mean, who's not happy to see the guy giving you meat?

Q. There is a lot of pressure to get the deli slices thin enough.

A. Believe me, I'm not saying it's without its challenges. But someday you just might be at the deli counter, when I'll look up and you'll look at the fellow slicing the lox, and say, "Didn't this guy used to be on TV?"

Don't give your college graduate a free ride. Read

What to do when college kids move back home. Read

Are your kids more spoiled than past generations? Read