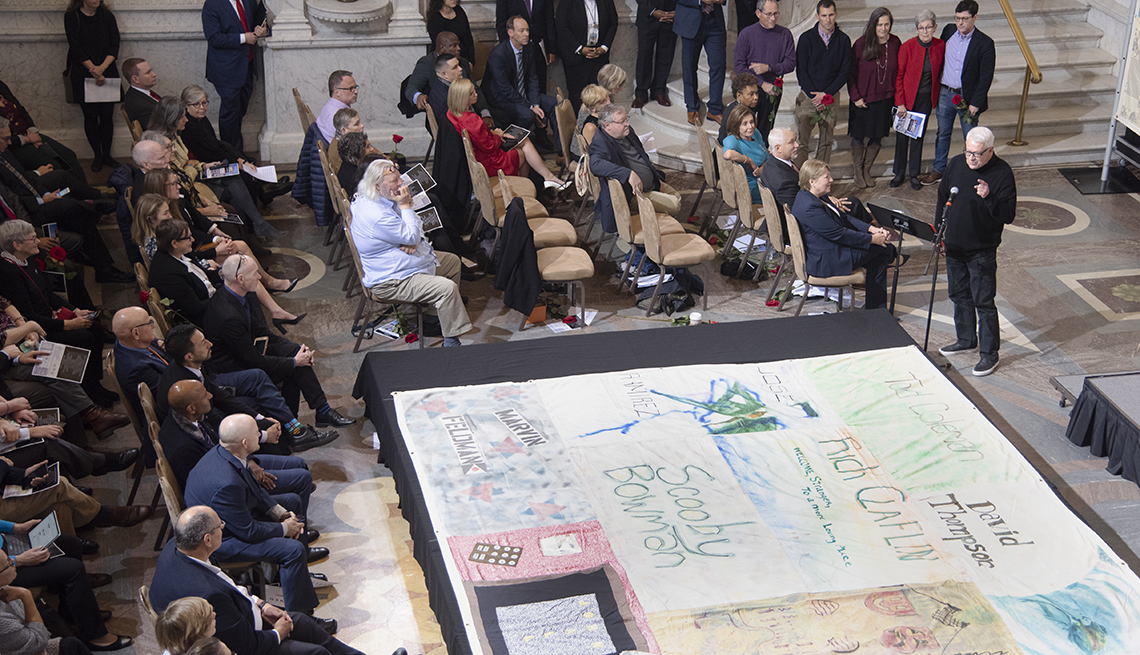 Cleve Jones talks about his best friend, Marvin Feldman, whose name is on one of the panels of the original AIDS Memorial Quilt.

In 1985, Cleve Jones was at what he calls “the epicenter of a horrendous and growing tragedy.”

Then a young activist living in San Francisco, Jones, 65, recalls learning that the city-wide number of deaths due to AIDS had reached 1,000 people.

"That was just a devastating number for me,” he recalls. “The majority of them lived and died within six blocks of my apartment, and there was no evidence. No evidence at all."

Nationally, the disease's toll was poised to climb even higher. By the end of 1988, the year in which World AIDS Day was first observed, more than 61,000 AIDS-related deaths would be reported across the country.

Those who, like Jones, lived through the height of the epidemic recall years marked by terror, tragedy and rage — but also the immense resilience of the LGBT community and groundbreaking work of activists and researchers around the world.

As the 31st annual World AIDS Day is celebrated Dec. 1, they say that honoring the past is key to keeping the global fight against AIDS alive into the future.

'The threat of the disease'

For Jones, that fight began in the early 1980s. He cofounded the San Francisco AIDS Foundation in 1983 and in 1987 created the first panel of what would become the AIDS Memorial Quilt, which was displayed for the first time during the National March on Washington for Lesbian and Gay Rights that year.

"It was healing, it was comforting. It was empowering,” he says of the quilt, which today spans more than 1 million square feet and commemorates the lives of more than 96,000 people. “It was a great tool for the media and great weapon to shame the politicians whose lack of action had contributed so much to the threat of the disease."

Much of the early stigma surrounding AIDS was fueled by ignorance, says Barbara Lewis, a physician's assistant and HIV specialist at Whitman-Walker Health in Washington, D.C.

Lewis, who began caring for patients early in the epidemic, recalls them telling her stories about hospital workers who were too afraid to bring meals into their rooms, or who were forced to use separate plates and bath towels at home by family members who did not understand how the disease was transmitted.

Some of the people she cared for, she says, had not even come out to their families when they had to grapple with how to reveal that they were also HIV-positive.

“I am alive because of the movement. And I want people to understand what we went through, what we won and what we lost.”

Historian Victoria Harden, who began documenting the AIDS epidemic in 1984 while working at the National Institutes of Health, also notes the cruel timing of the disease's emergence. AIDS devastated the LGBT community at a time when people were just beginning to enjoy the empowerment born of the gay liberation activism of the late 1960s and 1970s, which would soon give way to anger and despair.

Whitman-Walker's Lewis recalls that patients were “beating the doors down” to be included in clinical drug trials, desperate for access to medical treatment that might prove life-saving.

At the same time that researchers were working feverishly to find a successful treatment for the disease, activist organizations like ACT UP (AIDS Coalition to Unleash Power), founded in New York in 1987, were instrumental in speeding up the approval process for, and people's access to, new drugs.

Within the LGBT community, women's support of men living with the disease brought the community together in a way not seen before the crisis. As Jones writes in his memoir, When We Rise, “Before AIDS, the notion of an LGBT community was just that, a notion. But AIDS proved us.”

Moving beyond a ‘hostile’ world

Medical advances would also soon prove life-saving. In 1996, a drug regimen known as highly active antiretroviral therapy, or HAART, became widely available and prompted what Harden calls an “overnight” change in treatment. Today, people with HIV can live nearly as long as they would without the disease, and researchers have now turned their efforts toward a cure.

Despite momentous progress, Jones says that the stigma facing those who are HIV-positive has changed, but not disappeared, over the past three decades.

"For my generation, the stigma came from the outside world, which was already hostile toward us for being gay or for being black or whatever [else]. The stigma that younger people with HIV face today comes largely from their own community, from people who wag their fingers … and say things like, ‘Well, how could you allow yourself to get infected?'"

Jones says that he would like to see better sexual education — and more compassion — for young HIV-positive people today. He also points out that the fight is ongoing. In 2017, more than 38,000 people in the United States were diagnosed with HIV, and new infection rates are highest among gay and bisexual men, particularly those who are black or Latino.

Challenges also remain for older members of the LGBT community at large. “AARP’s Maintaining Dignity survey revealed that 76 percent of LGBT older adults are concerned about having adequate family and social supports to rely on as they age,” says Nii-Quartelai Quartey, AARP senior advisor and national LGBT liaison. “World AIDS Day reminds us that the health security of LGBT older adults, sometimes seen as a challenge addressed and dealt with in the 20th century, now requires 21st-century culturally competent solutions.”

Another trend that longtime activists point out is the knowledge gap between older generations who witnessed the early horrors of AIDS and younger adults for whom the disease is, as Harden puts it, “some long-ago historical story."

But in many ways, that story is ongoing. Take the AIDS Memorial Quilt. Recently, it was announced that the quilt will move from Atlanta, where it has been cared for in recent years, back to San Francisco, which will become its permanent home.

Jones says he is happy — and a little anxious — to see the quilt returned to the city where it was created. More than 30 years after he stitched the first panel, its message remains as timely as ever.

"For me, this isn't hyperbole, this isn't rhetoric. This is the truth of my life,” he says. “I am alive because of the movement. And I want people to understand what we went through, what we won and what we lost.”