The Center for American War Letters at Chapman University in California, directed by Andrew Carroll, is an invaluable repository of the words of Americans at war. Here are excerpts that vividly recall June 6, 1944.

Pfc. Dom Bart, who was with the first wave that landed on Omaha Beach, recalled what he witnessed to his wife, Mildred:

In the far away distance, I could hear the rumble of the artillery and the brrrp-brrrp of machine gun fire.... We didn't have a chance to fight back, as we were dropped in the water over our heads. No one's fault, as the entire beach was strewn with mines. With a stream of lead coming towards us, we were at the mercy of the Germans and we had all to do to reach shore and recuperate. I floated around in water for about one hour and was more dead than alive.... Pulled myself together and sought a rifle and around I went, trying to locate my outfit. It didn't take long to spot them, and was I glad. But gracious Lord, what was left of them, just a handful, about 25 out of 160. The battalion was almost wiped out, 800 casualties out of 1,000 men.

Pfc. Charles McCallister, 101st Airborne, wrote to the mother of his cousin, Pfc. Jim Dashner, also of the 101st. He relayed what he'd been told of her son's courage on D-Day:

"Jim's section leader had been killed and Jim was in charge, so he took over the machine gun himself. The enemy had them surrounded on three sides and had them pinned down with fire. Jim took the machine gun and crawled forward to a good position and set up the gun and began firing. He was in a spot and was doing plenty of good, so the [Germans] started concentrating all their efforts on him....

His platoon leader saw they were getting close and yelled to Jim that he'd better get out of there. The boys in the platoon said it was possible Jim didn't hear, as they had never known him to refuse to obey an order. But his friends seem to think he was just mad and was doing so much good at the time, he didn't want to move. So he stayed right there and fired until his gun was red hot. Then they got zeroed in on him and landed a mortar shell right on top of him. He died instantly but his hand was still clutching the trigger. As a result of his continued fire, the platoon was able to advance on their objective.... With all my love, Charles"

We stopped in the English Channel, and we could see the French coast off in the distance. Two large battle ships are shelling the coast. I see a row of large airships with cables hanging down — there is a smell of gunpowder filling the air.... As we hit the beach, the large front door went down. We all walked out on the dry sand, the tide was out…. As I walked up the beach, I saw arms and legs in the channel. A head was floating not far from the beach. He looked like a young man. There was a large pool of blood in the sand. Something terrible happened on this beach.... Will have to close. I am in a foxhole not far from the channel. I have a raincoat over me to hide the candle. I hear St. Lo is our first town. Mother, I grew up today. Your son, Robert

Pfc. James Martin described the awe and terror of parachuting into France in the face of German fire:

The night was beautiful. There were a few stratus clouds drifting about here and there. The moon silhouetted the planes around us, and danced on the whitecaps in the channel below us. The fiery exhaust of our engines reminded me strangely of a blast furnace. The many dark forms scattered in the choppy waters of the channel were, I realized, part of the world's greatest armada of ships waiting to belch forth thousands of troops into Hitler's “impregnable” wall, and I suddenly realized that they were waiting and depending on us.... Then I stepped out to meet a ladder of [enemy] flak and tracers. Thank God I missed all the rungs on the way down.... The loneliest feeling in the world was when I hit the ground with not another soul around me. Love, Jimmie

Capt. George Montgomery, with the 82nd Airborne, wrote about his D-Day experiences to his fiancée Arline:

Arline, my dearest — Today is our 20th day in action, yet it seems like years. What has happened to me and my battalion would be scoffed at, even in a 10¢ novel, as being impossible. Why the few of us left alive — are alive — is something to figure out in church. I've seen as many of my very best friends killed beside me. I just can't believe it is all really happening.

I never in my wildest dreams knew such terror could grip your very soul. The business of landing deep in enemy territory & trying to hold a position assaulted and shelled from 4 sides until friendly troops break through — is something I hope they never ask me to do again. The night we jumped, D-Day — 6 hours, was the payoff night. The Jerries knew our plans down to the last detail and were waiting for us with everything they had.

My chute was on fire from tracer bullets when I landed — right in front of a machine gun emplacement. I cut out of my harness & crawled for a couple of hours with bullets whistling past my ears, coming from seemingly every direction.... We have had mail brought to us twice and have been permitted to write twice. Both mail calls brought me letters from you Arline — & I could have wept with joy & relief to hear from you & that you were still of a mind to be Mrs. G. Montgomery one of these days.

Montgomery returned home to Iowa after the war and married Arline in 1946.

Now that I am actually here, I see that the chances of my returning to all of you are quite slim, therefore I want to write this letter now while I am yet able.

I want you to know how much I love each of you. You mean everything to me, and it is the realization of your love that gives me the courage to continue.... I have requested that this letter be forwarded only in the event I do not return.

You have had many times more than your share of illness and deaths in the family — still you have continued to exemplify what true parents should. I am sorry to add to your grief — but at all times, realize that my thoughts are of you constantly and that I feel that in some small way I am helping to bring this wasteful war to a conclusion. We of the United States have something to fight for — never more fully have I realized that. There just is no other country with comparable wealth, advancement, or standard of living. The U.S.A. is worth a sacrifice! Remember always that I love you each most fervently and I am proud of you. Consider Mary, my wife, as having taken my place in the family circle and watch over each other.

Love to my family, Jack

Two and a half weeks after D-Day, Lundberg was the lead navigator on a B-17 flying over Abbeville, France, that was hit by German anti-aircraft fire, burst into flames and crashed. Lundberg was killed.

P-47 pilot Capt. George Rarey found out before D-Day that he was a father, and wrote this letter:

Junie!... Got back from a mission at 4 o'clock this afternoon & ... what did I see? The Deacon waving at me as I walked up the road to the shack. A small yellow envelope — I thought it was a little early, but I quit breathing completely until the wonderful news unfolded — A Son! Darling, Junie! ... I'm so proud of you, I'm beside myself....

Junie, if this letter makes no sense forget it — I'm sort of delirious. This iron hut looks like a castle — I'm a father. I have a son!

Rarey's P-47 was shot down a couple weeks after D-Day while supporting ground troops. He died without seeing his son. 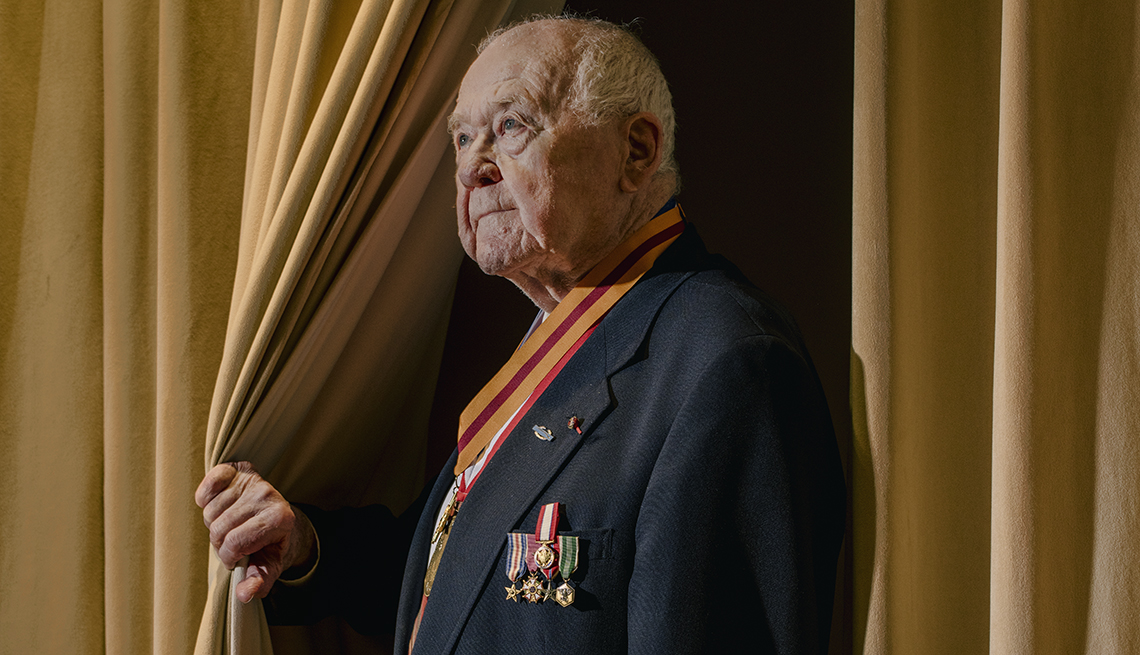 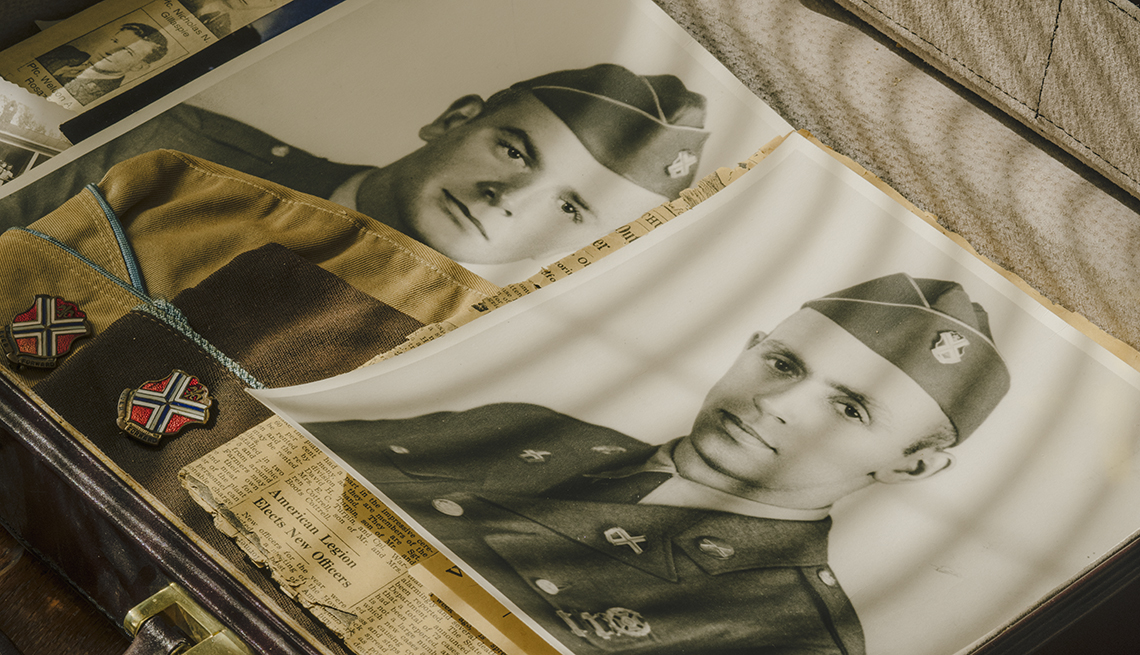