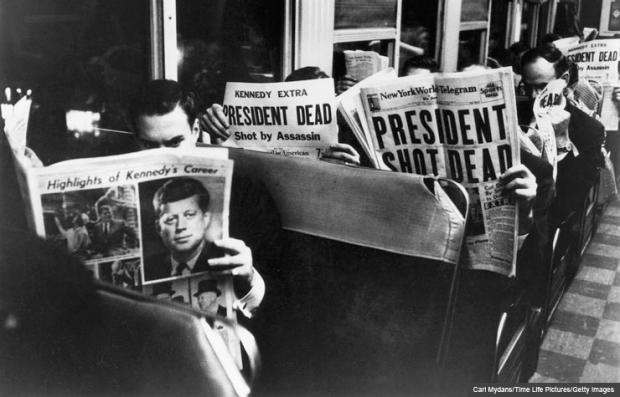 Evening commuters in New York read about the day's events.

I was a footnote of sorts to the awful events of that weekend in 1963 when John Kennedy died in Dallas.

In those days, I was the night police reporter on my hometown newspaper, the Fort Worth Star-Telegram. President Kennedy had made a breakfast speech in Fort Worth before going to Dallas on that fateful day.

When we got word he had been shot, I raced to the office and, as I pulled into the Star-Telegram parking lot, the bulletin came over the radio: The president was dead.

There was total bedlam in the newsroom. Every phone was ringing. I grabbed one. A woman caller asked, "Is there anyone there who can give me a ride to Dallas?"

"Lady," I said, "we're not running a taxi service. And besides, the president has been shot!"

"Yes," the woman said. "I heard on the radio that my son is the one they arrested."

It was Lee Harvey Oswald's mother.

I jotted down her address and told her I would be there shortly to take her to Dallas. The paper's automobile editor, Bill Foster, was test-driving a Cadillac that week, so I commandeered Bill and his sedan and drove to the address on the west side of Fort Worth that Mrs. Oswald had given us. She was standing on the curb, and we drove her to the Dallas police station. I sat in the back with her; Bill drove, and I interviewed her along the way.

In those days, we never told people who we were unless they asked. Since I always wore a snap-brim hat, the Dallas cops assumed I was a young detective. At the station, I just approached the first policeman I saw and said, "I'm the one who brought Oswald's mother over from Fort Worth." The officer took us to a room in the burglary-squad office. After a while, Mrs. Oswald asked me if they would let her see her son, so I approached the chief of homicide and asked.

Things were much more informal in those days, but I was still stunned when he said, "We should probably do that," and we were ushered into a holding room off the jail.

I was on the verge of the biggest story of my life — a chance to question the man who was charged with killing a president.

It was not to be. After six hours in the police station, an FBI agent finally did what someone should have done when I arrived: He asked who I was. He was not amused to discover I was a reporter. He told me to leave immediately, seemed in a mood to kill me and said something to that effect.

I never got that scoop. But I had gotten the first interview with Oswald's mother, my story was picked up by both Time and Newsweek, and for the next two days I covered the awful story that left the nation in shock and altered America forever. In 1963 Bob Schieffer was the Fort Worth Star-Telegram's crime reporter.

That weekend would be a turning point for the nation in so many ways. We had always thought of our presidents and the presidency itself as larger than life; our presidents were all but invincible. And suddenly this young president, in the prime of his life, was shot down by a madman. He was as vulnerable as the rest of us.

We had never gone through anything like this. We didn't know what it meant, beyond just the tragedy of a president being murdered. When it first happened, the government closed off the borders with Mexico. We didn't know if this was some kind of conspiracy or even the first shot of World War III. There was a great feeling of terror that hung over people. Your first emotion was, "Why did this happen?" "Who did it?" and "Why?"

There had been considerable right-wing hostility toward Kennedy in Dallas before the president arrived, with hateful signs and some nasty advertisements. But most people didn't feel that way. Kennedy got an overwhelmingly friendly reception in Dallas. The night before, he was cheered when his plane arrived at Carswell Air Force Base in Fort Worth. More than 10,000 people showed up at 11 o'clock at night.

When the president arrived at his hotel, he and Mrs. Kennedy discovered that local citizens had hung a priceless collection of paintings on the walls of their suite. The Kennedys appeared at a breakfast that morning, and Fort Worth's A-list gave him another warm welcome. He was also cheered when he spoke outside the hotel. As the president's motorcade approached downtown Dallas, Nellie Connally (wife of Texas Gov. John Connally), who was in the president's car, said to Mrs. Kennedy, "You can't say Dallas doesn't love you." And then they turned the corner, and this guy shot him.

It turned out that Oswald was anything but from the right wing. He had defected to the Soviet Union at one point and later led pro-Castro demonstrations. Nobody knew what to make of it. Being a police reporter, I wasn't nearly as interested in the ideology or motivation that might have been behind the assassination; I just wanted to find out who did it. It soon became clear to me that Oswald was a cold-blooded killer. Before they arrested him, he had shot Dallas policeman J.D. Tippit at point-blank range. He was a person without a conscience. To this day, nobody has shown me evidence and convinced me that there was somebody else involved.

But there could have been. I've always had an open mind. I think it will always be a mystery — one of those things that we may never know the answer to. It was such an overwhelming story, and such an overwhelming tragedy; I'm not convinced people will ever be satisfied that Oswald acted alone. But there are still questions about the details of Lincoln's assassination. For that matter, there are still questions about the assassination of Julius Caesar. 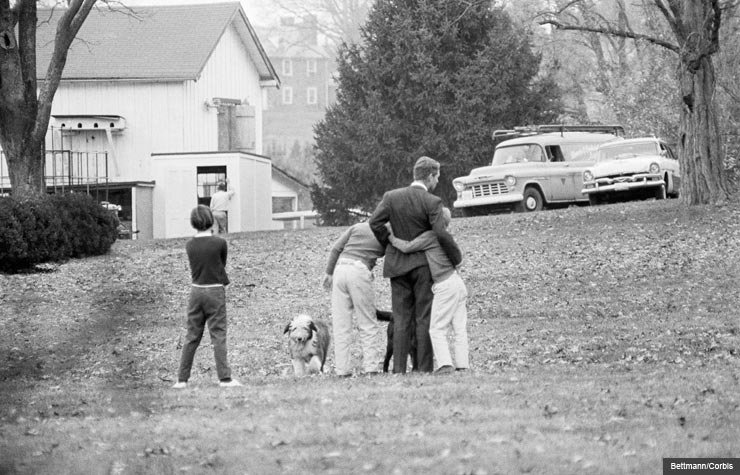 The Kennedy assassination was also a dramatic turning point for journalism. For the first time in the history of the country, the entire nation focused on one story and watched it unfold live on television.

This was an era of gatekeeper journalists. You had Walter Cronkite. You had Chet Huntley and David Brinkley. You had the editors of the New York Times and other powerful mainstream newspapers. In a sense, we were all getting information and basing our opinions on the same stuff.

Now our news comes from a variety of places. We're into this era of what I call validation journalism, where people watch a certain channel or listen to a certain show because they are looking not necessarily for facts but for a news product that validates what they already believe. You can get your news from a liberal point of view, or you can get it from a conservative point of view. The real problem is: Is it true? Can it be trusted? You have to be very discerning.

I've always had a theory that the most successful politicians are the ones who master the dominant communication medium of their time. The founders were all great writers, because in those days most people got their news about government from the written word. Roosevelt was the first to grasp radio: He knew that he was talking to six or eight people sitting in their living room, not shouting at 40,000 people in Yankee Stadium.

Kennedy was the first one to truly take advantage of the power of television. And he was better at it than anyone has been since. Reagan was quite good, but nobody was as good as Kennedy. He understood that it was not always what the president said; sometimes it was the way he said it. People loved his banter with reporters. They even loved the way he could charm his way past answering the questions he didn't want to answer.

Kennedy didn't have many legislative accomplishments. The great battles were won later, by Lyndon Johnson and the work he did on civil rights. Had it not been for Vietnam, where he made an enormous mistake, I believe Johnson would rank as one of the top four presidents. But Kennedy turned a page of American history as we went from the 1950s to the '60s. Eisenhower was a good president, but he was of a previous generation. It was a more traditional kind of leadership.

And then along came this young, vigorous, glamorous man, with a beautiful wife. It was like The Wizard of Oz. Remember how the movie started out in black-and-white, and then Dorothy opens her front door into this vibrant Technicolor? That's how I think of the Kennedy administration. He brought style and grace, and inspired a generation to do something for their country. That is the great contribution that Kennedy made. 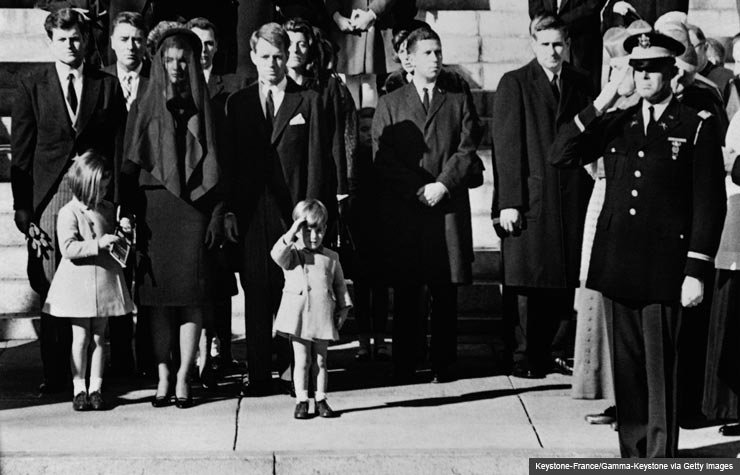 The president's funeral was held in Washington, D.C., on Nov. 25, the same day as John F. Kennedy Jr.'s third birthday. The mourning nation cried even more upon seeing the little boy salute his father's coffin.

The Kennedy assassination was the beginning of a series of very difficult events. We went through the protests on Vietnam. People felt the government hadn't been straight with them. What we call the "credibility gap" developed. In 1968 we had the horrible deaths of Martin Luther King Jr. and Bobby Kennedy. Then came Watergate.

Americans grew more skeptical, and more cynical. Our confidence in institutions was shaken — all institutions, from government to universities and even churches. And we never quite got it back. We would never feel the same about any of those things as we did before John Kennedy's death.

Several nights after the assassination, I went back to the police beat. I was looking at this horrible car wreck, and I realized I was completely unmoved.

A police reporter sees a lot of death; every time you cover a story, you're walking in on the worst moment of someone's life. You need to put your emotions aside. But that doesn't mean you don't have any. Yet, in the weeks after the assassination, I realized I had completely expended whatever it is that causes you to have empathy. It took me a while to get that back. I think it was much the same for the country. It was, I've always said, the weekend America lost its innocence.