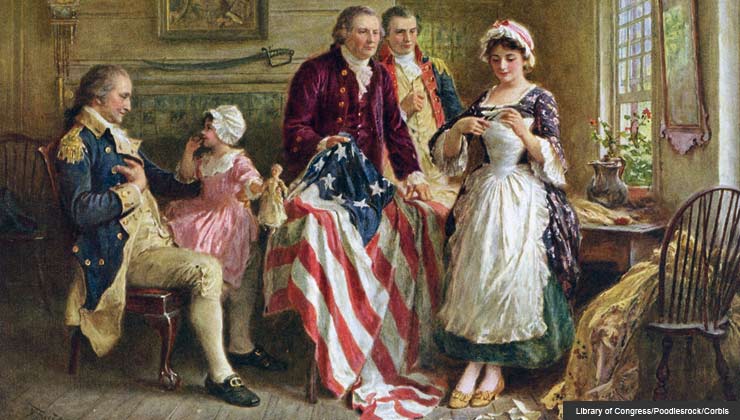 En español | Americans love our flag. We display it at concerts and stadiums to celebrate, and at times of national tragedy to show our resolve.

We have our schoolchildren pledge allegiance to it; we have consecrated it in our national anthem; we have a holiday, Flag Day, to honor it every June 14, as well as have it on prominent display for the Fourth of July.

Yet the iconography and history of the American flag, especially its early history, are infused with myth and misrepresentation. Here are five of the most prevalent myths.

The Betsy Ross story is the most tenacious piece of fiction involving the flag. There simply is no credible historical evidence — letters, diaries, newspaper accounts, bills of sale — that Ross (then known as Elizabeth Claypoole) either made or had a hand in designing the American flag before it made its debut in 1777.

The story cropped up in 1870, almost 100 years after the first flag was supposedly sewn, when William Canby, Ross’ grandson, told the Historical Society of Pennsylvania in Philadelphia that his grandmother made the flag at George Washington’s behest. Canby’s sole evidence: affidavits from family members. The iconic 1893 painting of Ross sitting in her Philadelphia parlor with the sun beaming down on the flag in her lap is a scene invented by Charles H. Weisgerber, the artist and entrepreneur who profited from the Betsy Ross legend.

While Ross did make flags in Philadelphia in the late 1770s, it is all but certain that the story about her creating the American flag is a myth.

As President Woodrow Wilson, who presided over the first official national Flag Day on June 14, 1916, is said to have replied when asked his thoughts on the story: "Would that it were true." 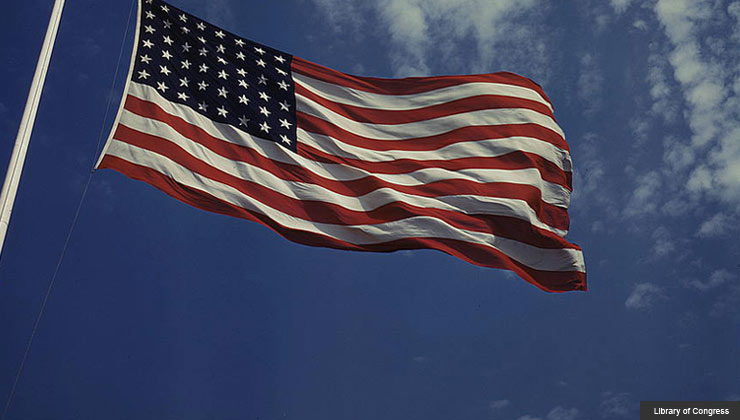 Much symbolism has been attributed to them, but the colors of the American flag have never had any kind of official imprimatur.

No federal law, resolution or executive order exists providing an official reason for the flag’s colors — or their meaning. The closest thing to an explanation are the words of Charles Thomson, the secretary of the Continental Congress, who was instrumental in the design of the Great Seal of the United States.

Thomson’s report to Congress on June 20, 1782, the day the seal was approved, contained a description of the colors, the same as those in the flag: "White signifies purity and innocence. Red hardiness and valour and Blue ... signifies vigilance, perseverance and justice."

Various official documents and proclamations — including one by President Ronald Reagan marking 1986 as the "Year of the Flag" — have echoed that reasoning.

But the colors do not have, nor have they ever had, any official imprimatur. Historians believe that the use of red, white and blue in the Stars and Stripes has to do with the simple fact that they were the colors of the first flag of the American colonies, the Continental Colors. And there is little doubt where the red, white and blue of the Continental Colors came from: the Union Jack of the United Kingdom. 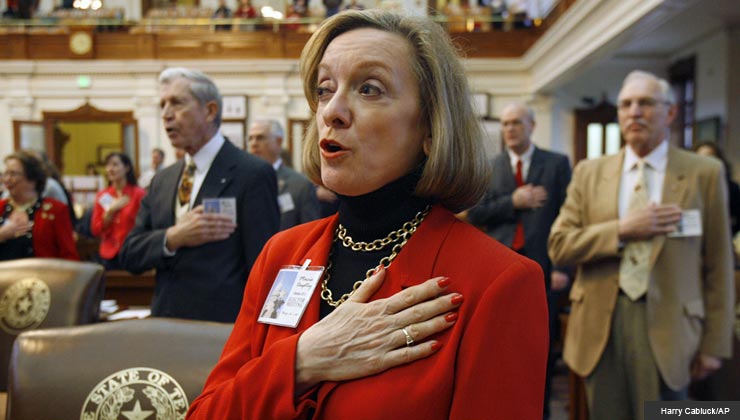 Members of the Electoral College recite the Pledge of Allegiance.

Myth #3: The Pledge of Allegiance has long been recited in Congress and other governmental bodies.

The pledge was written by magazine editor Francis Bellamy in 1892 for a nationwide public school celebration of the 400th anniversary of Christopher Columbus’s landing. In 1898, during the Spanish-American War, New York became the first state to mandate that public school students recite the Pledge of Allegiance at the beginning of each school day. Many states followed suit, and the pledge remained a staple of the daily routine in many schools until 1988, when it became an issue in the presidential campaign.

Vice President George H.W. Bush criticized his opponent, Democrat Michael Dukakis, for vetoing a bill as governor of Massachusetts that would have required the pledge to be recited in public schools. Dukakis said he did so after being advised that the law was unconstitutional.

At the height of the campaign, on Sept. 13, 1988, the pledge was recited on the floor of the House of Representatives for the first time. Republican members of the House, who were in the minority, offered a resolution to that effect, and it was accepted by Speaker Jim Wright, a Democrat. Wright ruled that from then on, the pledge would be recited at the start of business each day that the House was in session.

The Senate did not begin daily recital of the pledge until June 24, 1999. Since then, the pledge has become part of the opening rituals of nearly all state and local governmental bodies. 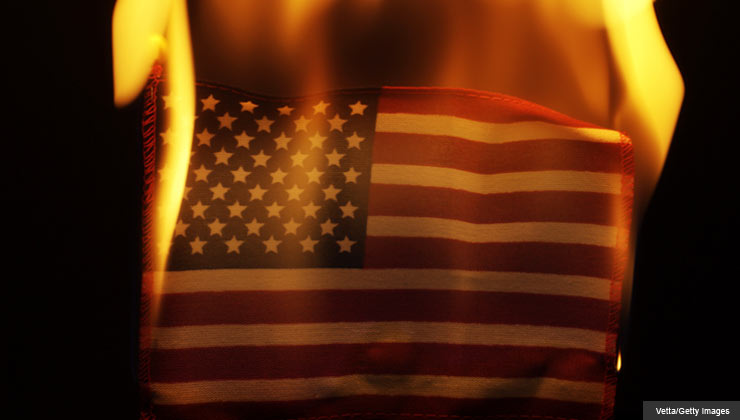 Myth #4: It is illegal to burn the American flag.

It was illegal until 1989, when the Supreme Court ruled 5 to 4 in Texas v. Johnson that burning the flag is a form of symbolic speech protected by the First Amendment.

The case involved Gregory Lee Johnson, a member of the Revolutionary Communist Youth Brigade, who had burned the flag during a protest at the 1984 Republican National Convention. He was convicted of violating Texas’s flag-desecration law, fined $2,000 and sentenced to a year in jail. The Texas Court of Criminal Appeals overturned the conviction, ruling that Johnson was exercising his First Amendment right to freedom of speech.

The Supreme Court’s decision invalidated a 1968 national flag-desecration law, as well as similar laws in 48 states (all except Wyoming and Alaska). In response, Congress passed the Flag Protection Act, but that law was also challenged and wound up in the Supreme Court. The court in 1990 essentially affirmed its earlier ruling, stating that any law banning flag burning violated free speech.

Those decisions led to a national movement to amend the Constitution to make flag desecration illegal. The leading voice in that effort has been the Citizens Flag Alliance, which was founded in 1994 by the American Legion. Proposed amendments have come up regularly in the House and Senate since then but have yet to receive sufficient support. 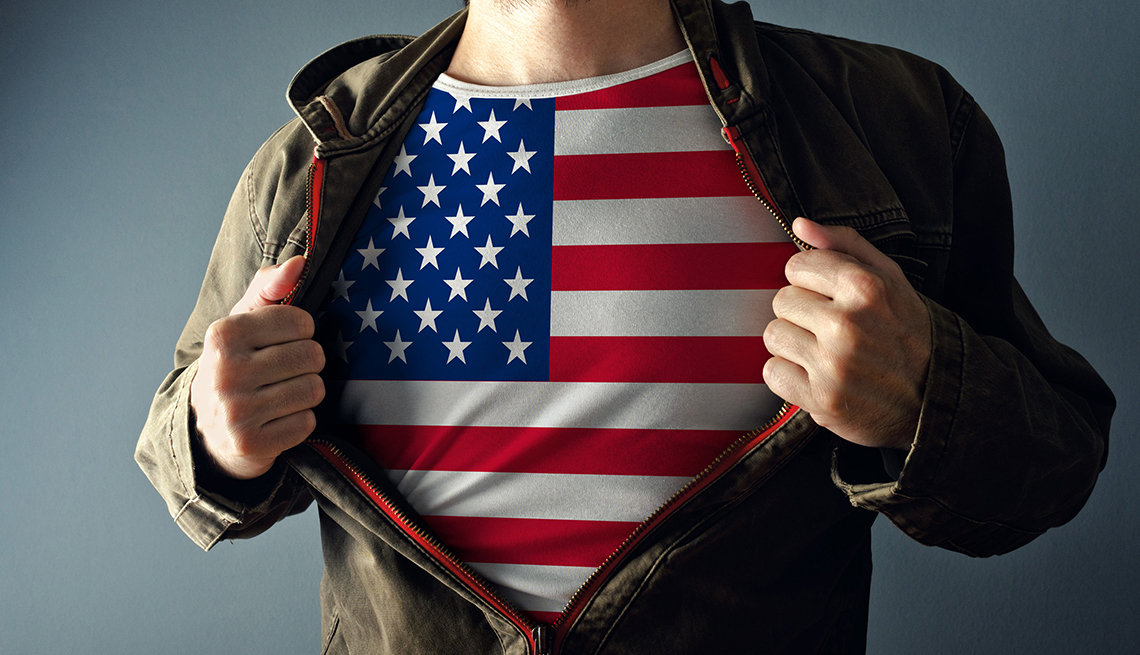 The U.S. Flag Code frowns on the use of the flag "for advertising purposes." It goes on to warn against the sale or display of any "article of merchandise ... upon which shall have been printed, painted, attached, or otherwise placed a representation of" the flag to "advertise, call attention to, decorate, mark, or distinguish the article or substance on which so placed."

In other words, when you wear a flag T-shirt or hat while reclining on an American flag beach towel near your American flag camping chair, you are violating the Flag Code. The code, which was drawn up at the first National Flag Conference in Washington in 1923, is part of the law of the land. But it is not enforced, nor is it enforceable. It is merely a set of guidelines, letting Americans know what to do — and what not to do — with our red, white and blue national emblem.

There is no Flag Police. You will not be arrested for wearing a flag-embossed T-shirt on Independence Day — or any other day of the year.

Marc Leepson is the author of Flag: An American Biography and, most recently, Lafayette: Lessons in Leadership From the Idealist General.