En español | CHARLESTON, S.C. — Carolyn Thompson came to Charleston this week to talk to her fellow South Carolinians about why it's important that they vote. She especially wanted to call attention to AARP's campaign to get lawmakers to lower the cost of prescription drugs because she is convinced that, despite the deep divisions in the electorate, this country can come together.

"We just need to focus on the things we have in common,” says Thompson, 71, a retired health insurance manager and one of AARP's most active volunteers in the Palmetto State. “If I can help make that happen by coming here and volunteering and trying to get the issues out in front of people, why shouldn't I? As an African American, I know I had grandmothers and grandfathers who weren't allowed to vote. And I think it would be a disservice to them if I didn't get out here and work."

Throughout the campaign season, AARP volunteers, especially in key battleground states, will be showing up at candidate events to make sure those seeking the votes of older Americans know what issues the 50-plus electorate cares about. 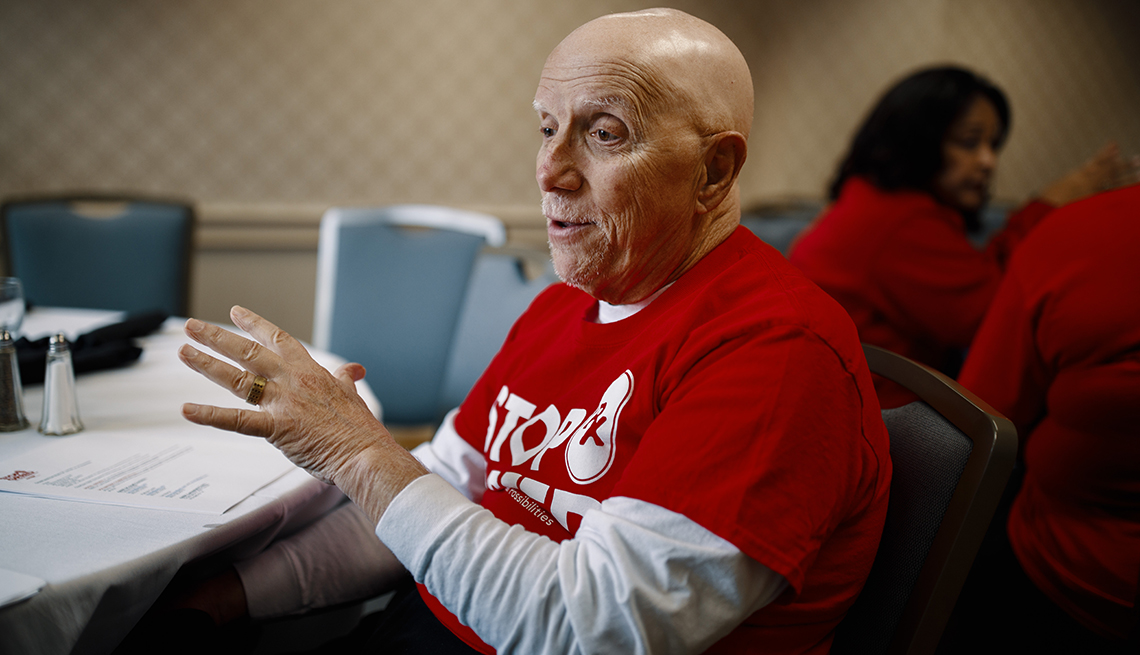 Volunteer Hank Povinelli of Ft Mill, South Carolina, gives his take on the upcoming primary and his reasons for volunteering during the orientation breakfast.

The first wave of volunteers gathered at the Francis Marion hotel, Charleston's oldest, to eat breakfast and get their marching orders, including catching up with candidates and waving Stop Rx Greed signs to promote the need to lower prescription drug prices.

"I firmly believe what we're doing here today and tomorrow is very meaningful,” Hank Povinelli, a retired IT executive said as he greeted other volunteers who came to Charleston from the Columbia area. “Our visibility makes a difference,” he says, adding that he met a man from San Antonio in the hotel lobby the day before who spotted Povinelli's Stop Rx Greed button. “I gave him my elevator speech about what this campaign is all about. My point is that our visibility makes a difference."

10 a.m. Monday: Meeting on the median 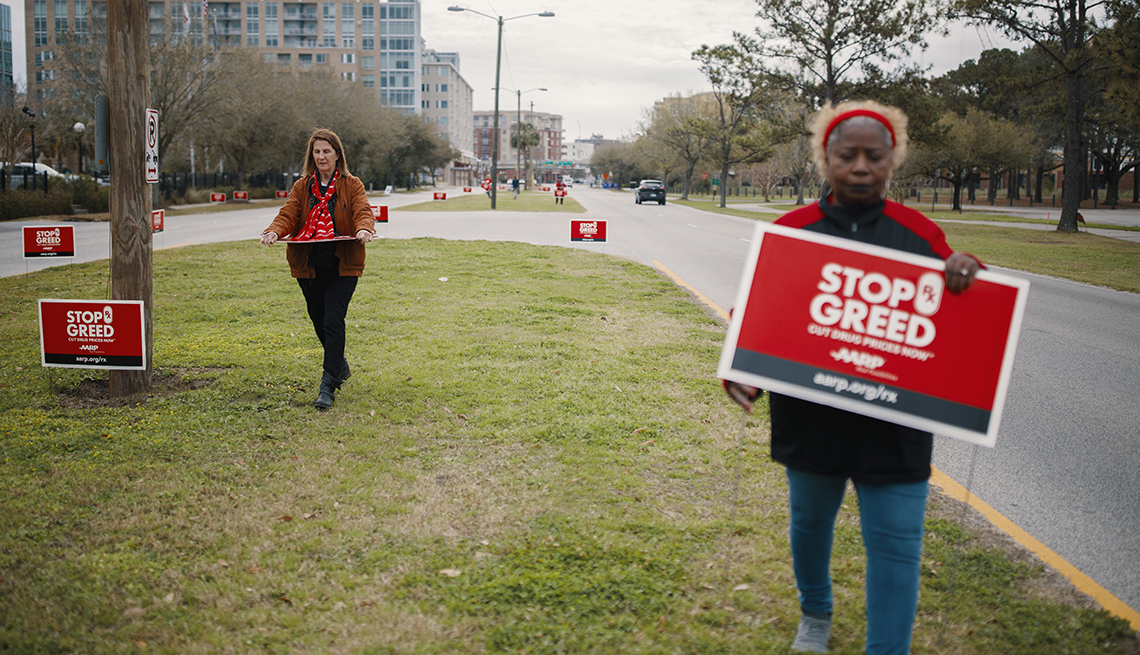 Volunteers Paula Brady, left, of Charleston, South Carolina, and Carolyn B. Thompson of Columbia, place signage in the median across from a Marriott set to host a dinner for the South Carolina Democratic Party.

A small team is dispatched to the Marriott Lockwood near Waterfront Park, site of the South Carolina Democratic Party dinner later that night. The plan is to put Stop Rx Greed signs along the median so when political leaders and activists arrive at the dinner they can't miss the message.

"Who doesn't want everyone to have affordable drugs?” asks Thompson, who says that's a number one concern among people she talks with at health fairs back home in Columbia. It was also the top issue in AARP's “She's the Difference” national and South Carolina poll. “We all want what's best for all of us. You can find people of every race that have problems affording prescription drugs." 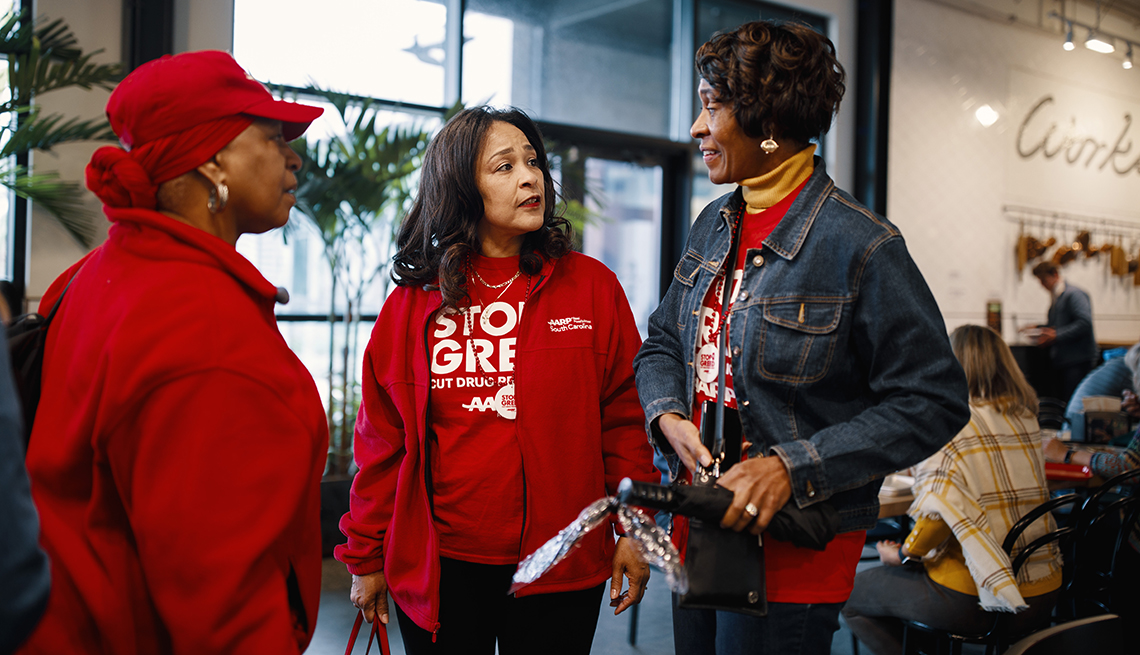 Volunteers Lorriane Simmons of Columbia, South Carolina (left), and Joy Trammell of Aiken (right), speak with an AARP staffer at an event for candidate Pete Buttigieg in Charleston.

Word comes on Twitter that former South Bend, Indiana, Mayor Pete Buttigieg has an event across town. The Rx Greed van springs into action and heads for a lunch spot in an office park. But it's a false alarm. It's a Buttigieg surrogate — Miss Black America — who is scheduled to be there.

Back to the hotel. But not before engaging with some diners — and media folks covering the presidential campaign — who are curious about the red shirts. 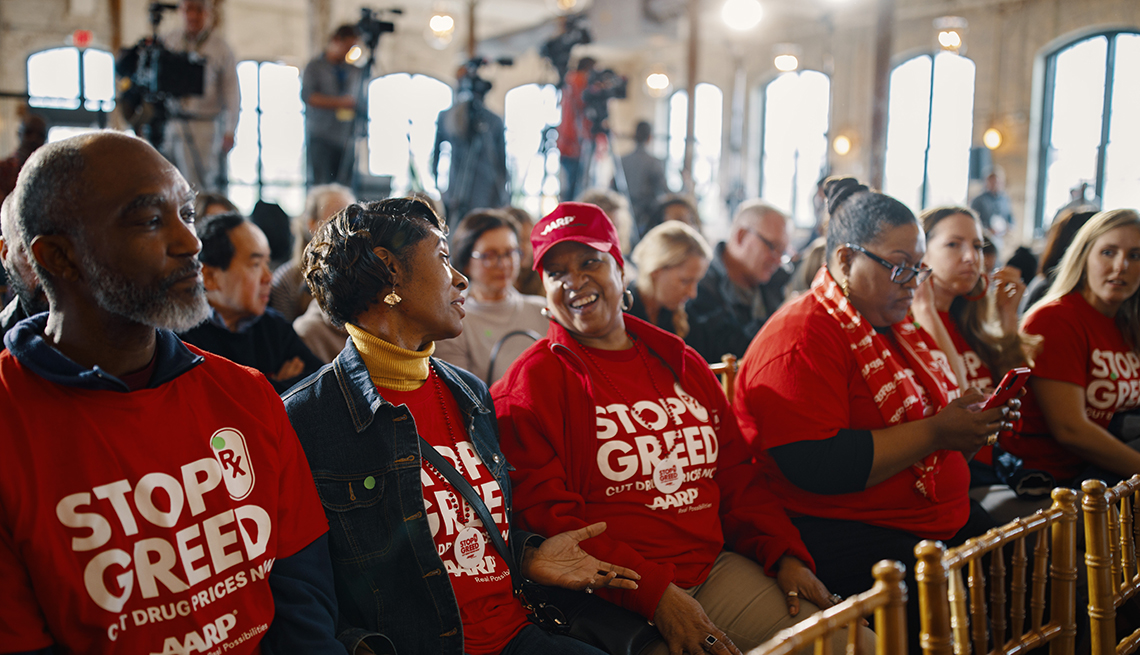 AARP volunteers and staffers wait for candidate Elizabeth Warren to arrive at an event in Charleston, South Carolina.

The seven candidates who will be on the debate stage Tuesday night begin trickling into the state, and a couple are even in Charleston already. One group of AARP volunteers is headed to a “Women for Warren” event with Massachusetts Sen. Elizabeth Warren, and another will later go to the College of Charleston for a community event with former Vice President Joe Biden.

Linnea Halfvarson was on vacation in Charleston when she realized she was in the middle of all this political activity. While waiting for Warren to arrive, Halfvarson — a resident of Kalamazoo, Michigan — said she hadn't made up her mind who she planned to support (Michigan's presidential primary is March 10, so she has some time). A self-employed psychotherapist, Halfvarson, 66, says this election is important enough for her to interrupt her vacation.

"I'm concerned for our country, for compassion and for social justice,” she says. “For the first time in my life, I've been scared that the structure of our democracy might be taken away.” Health care, women's rights and equality issues are on her mind as she considers who to vote for.

AARP's red-shirted volunteers form a row toward the front of the room. Warren speaks for about 15 minutes but doesn't take any of her signature selfies with the crowd.

On Wednesday, more AARP volunteers go to events in Charleston with Vermont Sen. Bernie Sanders, Minnesota Sen. Amy Klobuchar and a second one for Warren. 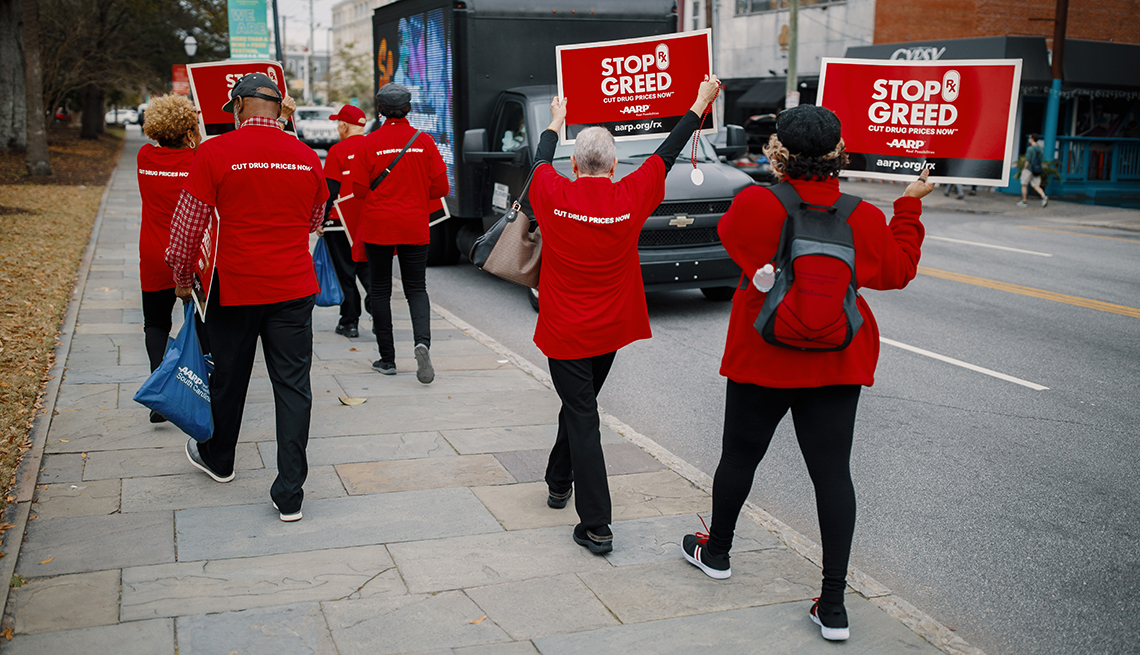 AARP volunteers hold signs up to cars driving by as they walk to the venue where that evening's candidates' debate will take place in Charleston, South Carolina.

Groups of volunteers head out to give away Mardi Gras Stop Rx Greed beads and ask passersby to sign petitions urging Congress to do something about the high cost of prescription drugs.

Thompson reported that along the way, the red shirts received thumbs up and support for the cause. “One man was working on a display in a window and came over to say he was an AARP member and supported the campaign.” 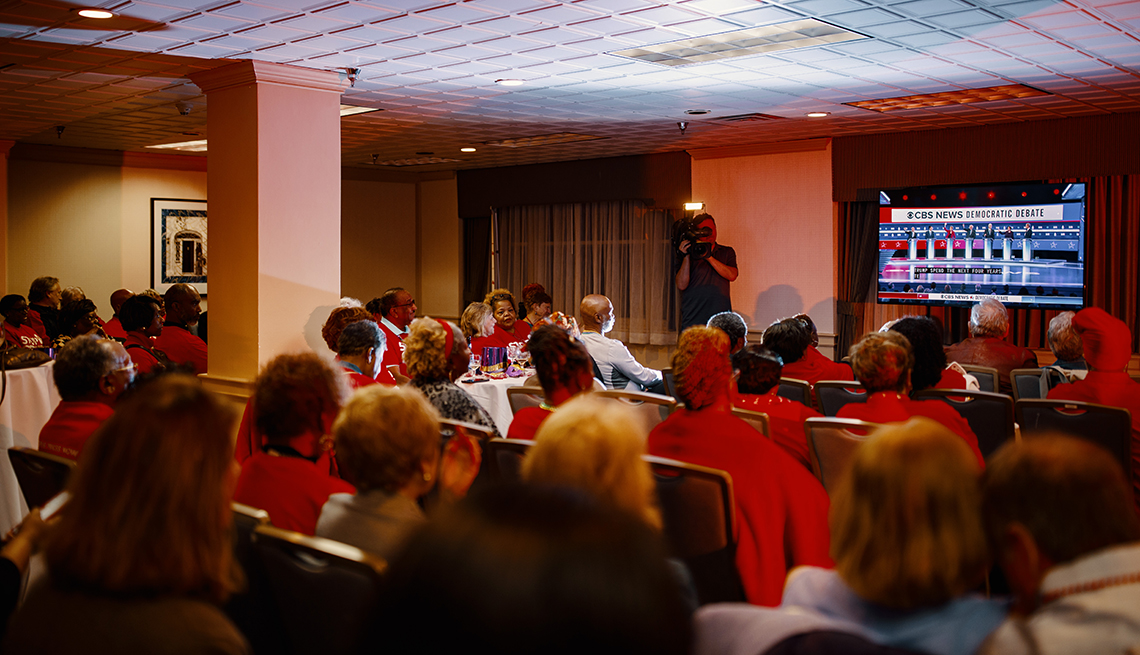 After an afternoon of sign waving in downtown Charleston and a little down time, the AARP group gathered to watch the final presidential debate before tomorrow's primary in South Carolina and the Super Tuesday votes in 14 states.

The audience applauded the one time the high price of prescription drugs was mentioned but overall was disappointed that the candidates didn't talk about the issues important to Americans age 50-plus.

Oliver Addison, 82, of Charleston, wanted to hear something about health care and education. “I believe we can have good health care,” he said, “but it's got to be done the right way.” However, Addison said he didn't hear any good solutions from the debate.

Editor’s note: This story has been updated to reflect the primary results.