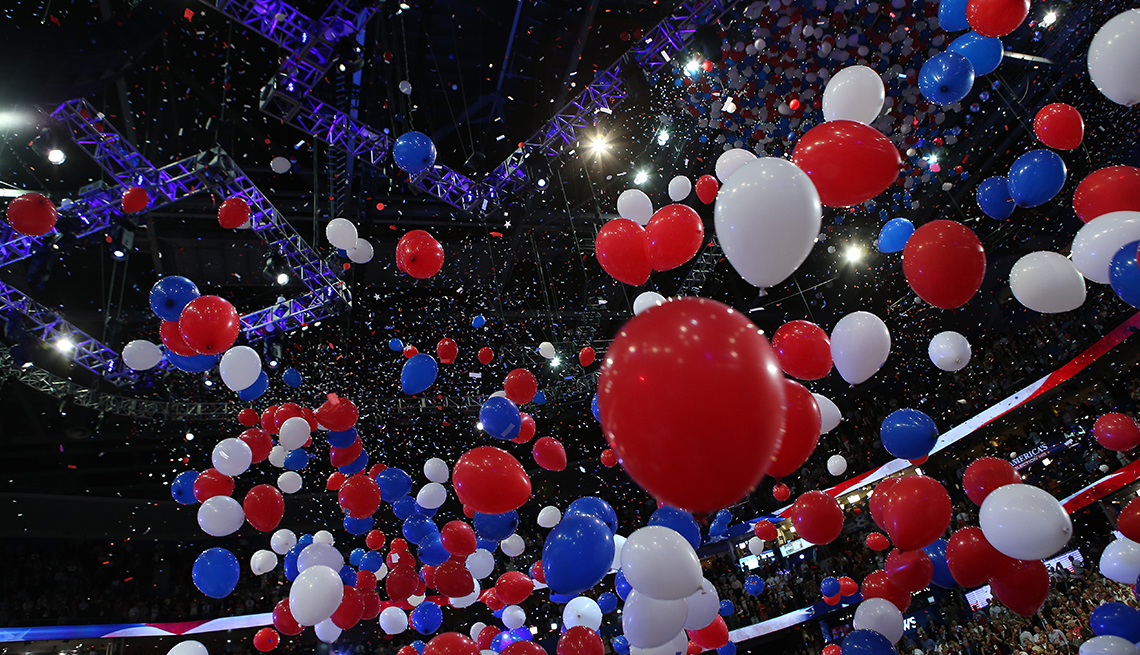 En español | The biggest political celebrations of the season were supposed to kick off this week. Funny hats, campaign buttons, balloon drops, parties, networking, sightseeing in the host city during the day and a parade of speeches at night. But in yet another way, COVID-19 has interrupted life as we know it: Delegates to the Democratic and Republican national conventions are mostly going to be celebrating at home.

The Democrats were scheduled to gather in Milwaukee, with 4,765 delegates joined by tens of thousands of political junkies — from volunteers and campaign workers to members of the media. But instead of delegates sitting in the Wisconsin Center beneath placards with their state names, for four days they'll be home in front of their laptops and other devices virtually attending daily state breakfasts, campaign strategy meetings and caucuses, and watching politicians make the case to elect former Vice President Joe Biden and Sen. Kamala Harris this fall.

And instead of being in an electricity-filled hall to witness their standard-bearer accept his party's nomination, Democratic delegates will watch Biden and Harris speak from a convention center in Biden's Wilmington, Delaware, home.

Then next week, Republicans were supposed to party in Charlotte, North Carolina. The Grand Ole Party has decided to stage a hybrid convention. Some delegates — 336 to be exact — will gather in North Carolina to officially renominate President Donald Trump and Vice President Mike Pence. The party has asked six delegates from every state and territory to meet at the Charlotte Convention Center. They will carry the proxy of the other 2,106 delegates who will participate virtually. The president and vice president will not be in Charlotte. As of Monday, the GOP hadn't announced where they will deliver their acceptance speeches, although Trump has indicated he wants to do so on the White House grounds.

For both parties, political activism tends to be a longtime avocation for many delegates. In 2008, CBS news surveyed the delegates to both conventions and found that their median age was 54. Here's what four veteran delegates — two from each major party — have to say about conventions past and present. 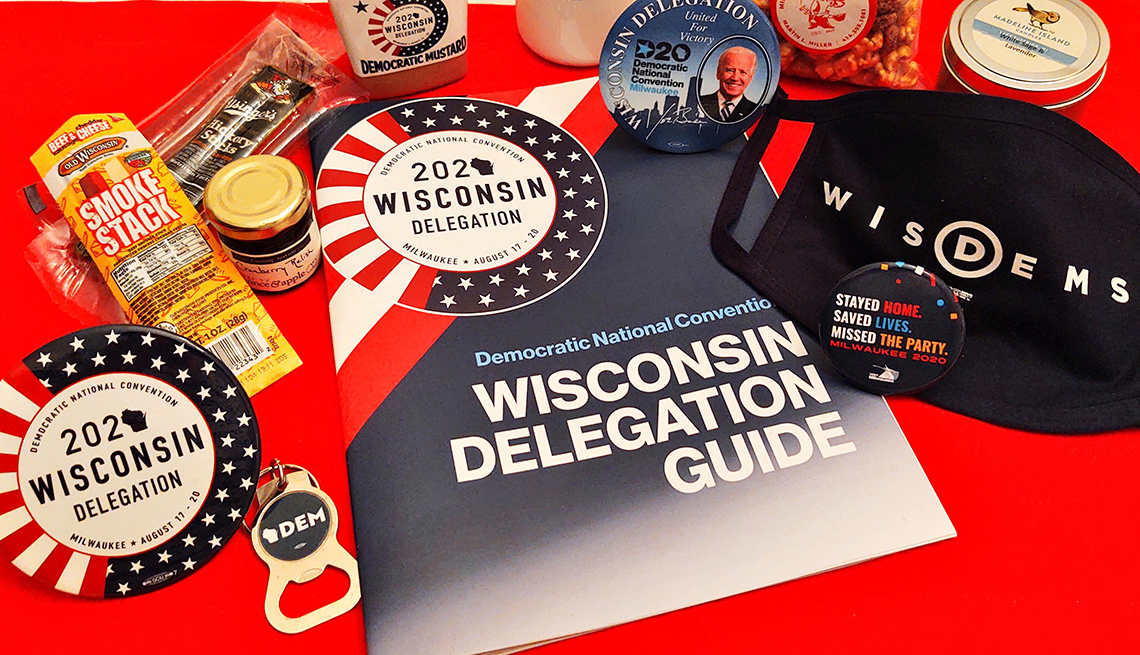 Margaret Wood first became a delegate from Wisconsin to the Democratic National Convention held in Charlotte in 2012 because, for her, democracy means getting involved.

"You participate in democracy. It's not something you just sit back and watch,” says Wood, 73, who is a retired elementary school teacher from La Crosse and a self-described political junkie. Being able to meet delegates from all over the country and political leaders she had up to then just seen on television, she says, is what makes conventions special.

"Who would have thought I'd ever meet Julian Castro,” Wood says of the then-mayor of San Antonio and the 2012 keynote speaker who showed up one morning to speak to her state's breakfast meeting. She also experienced the best pampering of her life when she saw a flyer for Huffington Post's “delegate spa,” complete with massages, quiet places to read, and tea and crumpets to snack on. “It was the most luxurious thing I have ever done."

Wood is a delegate to this week's convention. She's going to miss seeing the speakers up close, but “it's going to be more comfortable — with my bottle of wine and my Cheetos.” The party emailed her a ballot. and she's already filled it out and electronically voted for Biden.

Asked whether the Democrats made the right decision to keep delegates home, Wood pointed to two items in the goodie bag that the Wisconsin Democratic Party sent to its delegates: a button that says, “Stayed Home, Saved Lives, Missed the Party” ... and a mask. 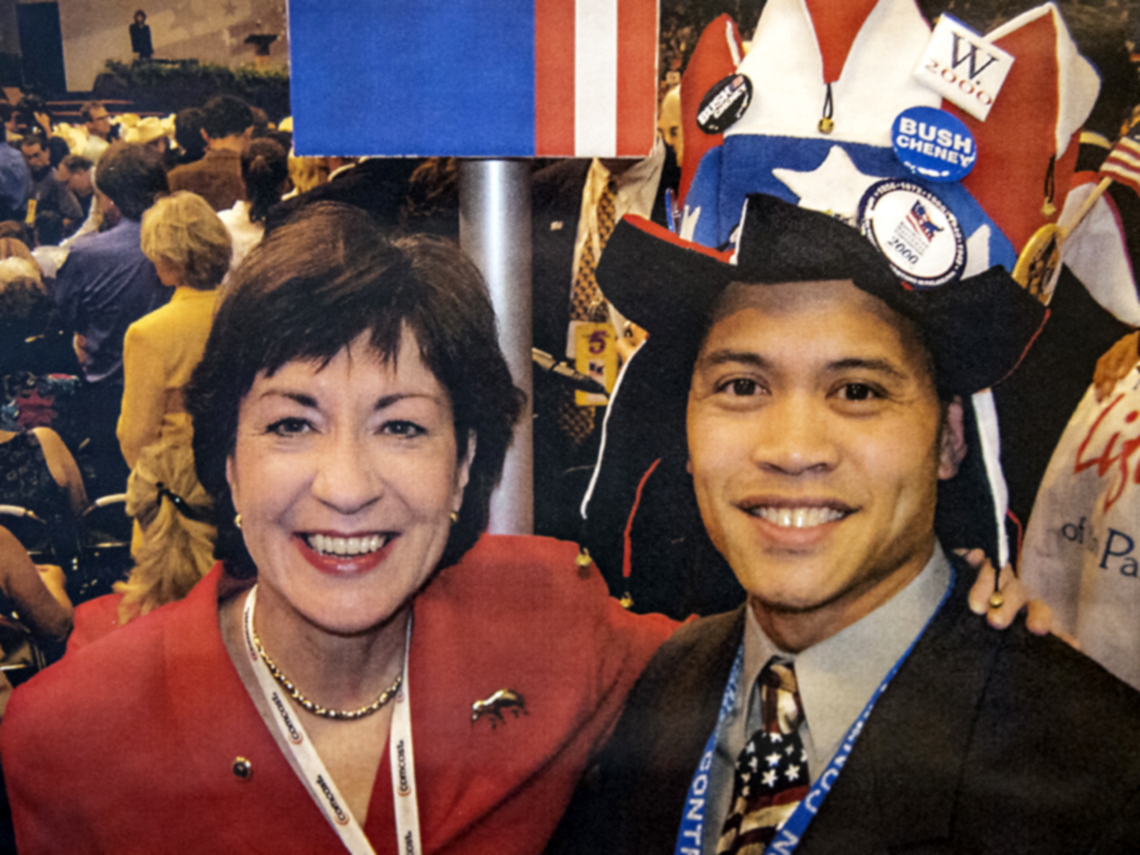 Mark Ellis still has the pen he used to certify John McCain's place on the ballot for president in 2008, in Maine. Ellis, who was the state Republican chairman that year, attended the 2000, 2004, 2008 and 2012 GOP conventions. He's kept his credential badges from each one as well as the red, white and blue court jester's hat — complete with bells — that he wore on the convention floors. “I've been an activist my entire adult life,” says Ellis, 59, who is membership director for the Maine Chamber of Commerce.

The New York City GOP convention in 2004 provided some unexpected encounters that stuck with him. One night, Ellis was stationed near the VIP area off the stage. From his seat, he could see former President George H.W. Bush and first lady Barbara Bush sitting by themselves. They were listening to professional wrestling star Dwayne Johnson, better known as “The Rock,” address the delegates. After Johnson spoke, he walked right by the former first couple and sat down a few rows in front of them. “That's when [Mrs. Bush] got up and walked down the stairs to the row behind him and poked him on the shoulder,” Ellis says. “He had this unbelievable look of surprise on his face. And, of course, he shot up, obviously embarrassed that he had walked by them and hadn't stopped to say hello. That was a really good memory for me because it was the kind of private moment that not everyone got to see."

A figure skating fan, Ellis also found himself close enough to meet Dorothy Hamill after she spoke. “It was just me gushing,” Ellis says. “And I remember she was very gracious” and stood as Ellis and other delegates had their pictures taken with the Olympic gold medalist. 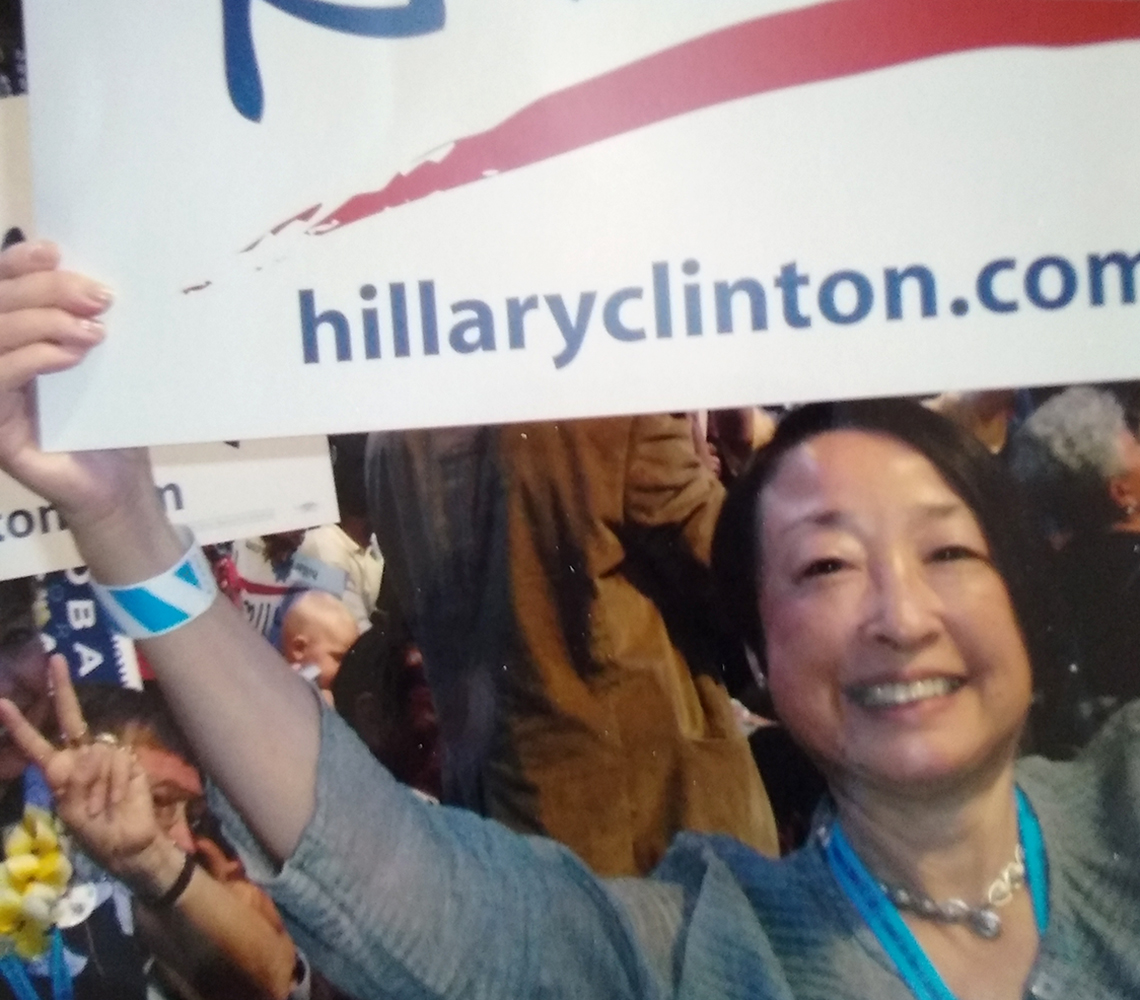 Jadine Nielsen went to her first Democratic convention in 1976, as a young volunteer, and has been to nearly all of them since — either as a volunteer or a delegate from California or Hawaii, where she and her husband retired to more than 16 years ago.

"Being involved is so exciting. There's nothing like it,” says Nielsen, 71, who worked as a U.S. Senate staff member and political appointee during several Democratic administrations.

For Nielsen, two of her most memorable convention moments came decades ago.

"Usually at conventions, no matter who is speaking, people are milling around, talking, walking around,” Nielsen says. But in 1976 in New York City, when then-U.S. Rep. Barbara Jordan went to the podium and became the first African American woman to deliver a convention keynote address, “everyone stopped. You could hear a pin drop. I've never experienced something like that again. I didn't even know who she was before she spoke. I was just so blown away by her voice and her command of the whole room."

Then in 1988, Nielsen was an official with the California delegation. One of the highlights of every convention is the call of the states, when each state casts its vote for the presidential nominee.

Nielsen got to experience some of the convention strategy firsthand. The Dukakis campaign wanted California to cast the ballots that would give the Massachusetts governor the number of delegates he needed to give him the nomination for president. She was the delegation's whip and was on the phone with the campaign aides until, finally, the time came for California to put Dukakis over the top. “All the television cameras, newspaper photographers were there in front of us” to record the moment, Nielsen recalls.

2020 not the first convention hiccup 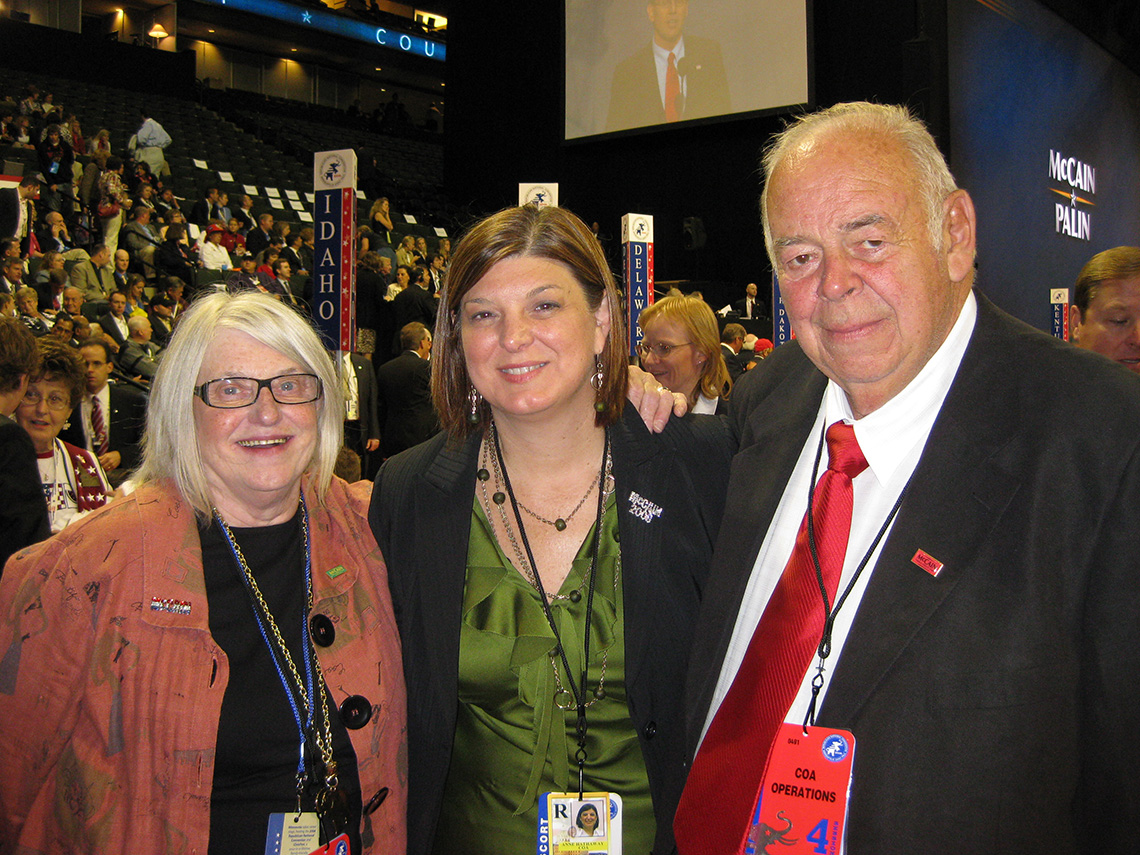 A lifelong Republican activist and former chief of staff for the Republican National Committee, Anne Hathaway went to her first convention in 1992, when as an Indianan, she was working for Vice President Dan Quayle. She has some firsthand experience with natural disasters affecting political conventions.

In 2008, Hurricane Gustav hit New Orleans just as the Republican convention was getting underway in Minneapolis. The GOP canceled almost all the first-day activities, Hathaway says. “We actually went dark on Monday night. President Bush did not come to the convention. We made a decision that there was no way that we could be dancing and celebrating in Minnesota when first responders and people were fighting for their lives in the path of a hurricane."

Then in 2012, the convention was in Tampa, Florida, and was due to get underway just as Hurricane Isaac was making its way to the state. “We made the decision that the first responders — public safety officials and bus drivers — needed to be taking care of their jobs, not worrying about driving buses and directing traffic,” Hathaway says. “So, our delegates were all confined to their hotels for 24 hours."

This year, Hathaway, 60, will drive from her home in Indianapolis to Charlotte. She is one of the six Indiana delegates who will represent the state party.

Hathaway says she has talked with staffers for the convention, “and I know that they are working their tails off to adjust and make sure we're safe. They don't want any of the 336 of us to become ill or to transmit the virus to anybody back in our communities."

Having some in-person presence in Charlotte, she says, “is an important part of our process, and I think we can do it well and do it safely."