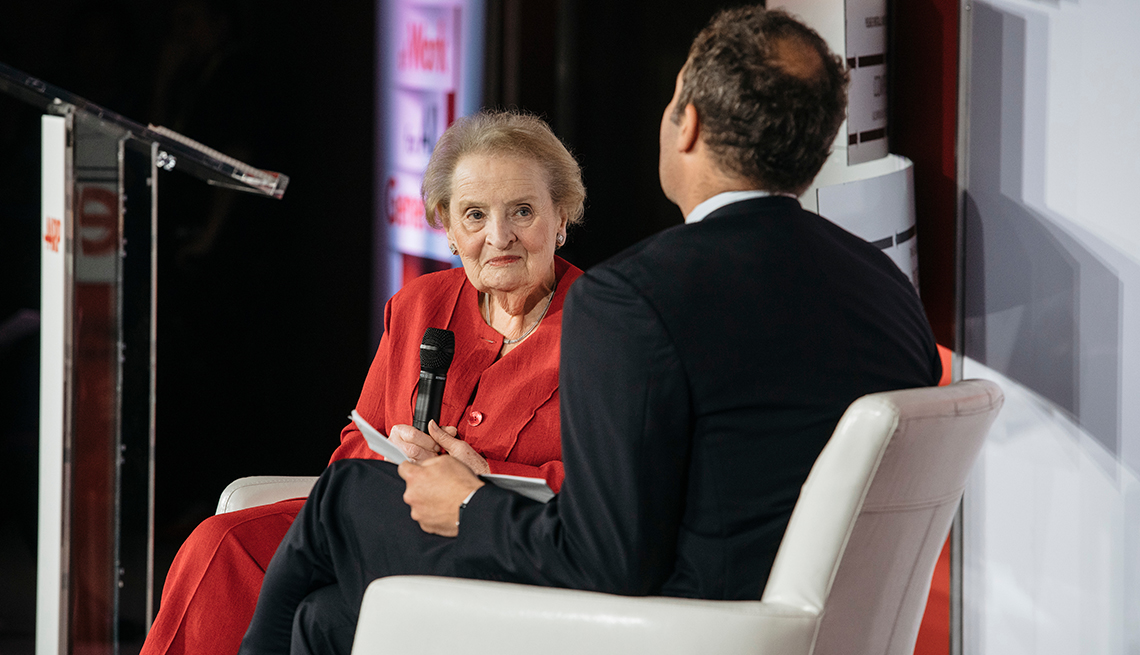 En español | Madeleine Albright says she is a “perennial” who has no plans to put her feet up and retire. At 82 she remains a teacher, author, speaker, businesswoman and adviser across the generations and around the world. On June 6, the 75th anniversary of D-Day, the former U.S. secretary of state participated in an AARP conference, “The Future of Work for All Generations.” Afterward, she talked with AARP about her longevity, her hopes for America and her famous pin collection.

Q: During AARP's fireside chat, you said you have no plans to retire. What motivates you to keep writing and speaking and working and traveling?

A: Well, first of all I enjoy it all and I'm endlessly curious. I like to learn new things. It took me a long time to find my voice and I'm not going to be quiet now.

Q: What do you mean by that?

A: I had a full-time job when I first got married, but then I didn't really have a full-time job again until I was 39 years old, when I went to work for [the late Maine senator and secretary of state] Ed Muskie. Then I was at the UN under President Clinton as a member of the Cabinet and part of the decision-making circle, and then secretary of state [1997-2001]. Suddenly, people were listening. I've learned a lot and I really do think, at complicated times, those of us who can be helpful should be. That's what motivates me.

Q: You're known for saying you're an optimist who worries a lot. Are you optimistic about America?

Q: What's the best way people can stay involved in their communities and political lives regardless of their age?

A: First of all, I believe in political involvement. Either people need to run for office or support those that do. I think [they can stay involved] through community involvement with the schools and helping each other.

Q: Of the 24 — and counting — declared Democratic presidential hopefuls, two of them are over 70 and four are over 65. What do you think about candidates of that age running for president?

A: I think a lot depends on their ideas and their stamina, not so much on their age. I think that what we should be looking for in our candidates is what they're proposing, how they see some new approaches to a genuinely complicated system, whether it's domestic or foreign. I'm more interested in their ideas and how they are operating than their age.

Q: As someone who teaches diplomacy to young people at Georgetown University, what's your advice to candidates about how to connect with the younger generation?

A: I think it's important for them to understand where the younger generation is coming from. I think connecting has more to do with your spirit than your age.

For me, that's the really dispositive thing: the extent to which any of these candidates are interested in listening and have some new ideas and are able to use whatever experience they have to explore some new ideas that they hear from the people.

Q: You've done cameos on several television shows, including Madam Secretary, Gilmore Girls and Parks and Recreation. Was being on television on your bucket list? Was it fun?

A: I do like to have fun. I've tried a lot of different things. I played the drums at the Kennedy Center with Chris Botti. I do watch TV shows, such as Gilmore Girls. When they called to see whether I would mind if somebody played me, I said: “Yes, I mind. I want to play myself."

Q: What was it like being on Madam Secretary when you had been a madam secretary?

A: What happened initially was that Tea Leoni [who plays Secretary of State Elizabeth McCord on the television show] called me and she wanted to get together so I could tell her what it was like to be secretary of state. We were having this conversation, and I thought: I must be out of my mind trying to tell this woman, smart and nice as she was… Then the writers got interested in what we were talking about and I ended up doing an episode with her.

Q: Talk about what happened when you were both seated at the same table at the annual White House Correspondents’ Association dinner.

A: CBS had asked me to go with them that year, and every time somebody said “madam secretary,” she would turn around. Then they wanted to do another sequence with the three of us [Albright and fellow former Secretaries of State Colin Powell and Hillary Clinton]. It was a lot of fun.

Q: We can't close a conversation without mentioning your pins. You are famous for wearing pins that send a message. How did that start?

A: Well, I clearly like jewelry. What happened was I went to the UN right after the Gulf War and my instructions were to make sure that the sanctions [against Iraq] stayed on.

I regularly said terrible things about Saddam Hussein, which he deserved because he invaded Kuwait. There was a poem in the papers in Baghdad that compared me to a serpent, so I started wearing a snake pin when we talked about Iraq.

I thought it was fun, so I went out and bought a lot of costume jewelry to depict what I thought we were going to do on any given day. On good days I wore flowers and butterflies and balloons, and on bad days, a lot of carnivorous animals and spiders and things like that.

The other ambassadors began to notice and would say, “What are we going to do today?” And I said, “Read my pins."

Q: What's the significance of the eagle pin you're wearing today?

A: It's June 6th, [the 75th anniversary of] D-Day, when we show who we are and our value system, so wearing an eagle, I think, makes sense."