En Español |Miguel Lopez's mother arrived in the United States as a refugee and never had the option of receiving Social Security. But the 66-year-old Lopez does, and he thinks the popular program should remain "untouched."

Sigrid Swick, 75, has relied on both Social Security and Medicare, especially during several bouts of cancer. Her son Thor Swick, 50, isn't sure the programs will be around when he retires.

Will retirement security decide how many Floridians vote in the upcoming election? — Photo by David Walter Banks/LUCEO 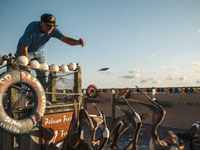 Edward Quinones, 78, is alarmed at what he sees as attacks on programs that people depend on — though he's open to eligibility changes to keep them solvent.

And Tammi Madison, 54, wishes younger people would be more realistic about their retirement math and make sure to have private funds and investments for their postwork years.

They are all Floridians, all residents of the pivotal I-4 corridor that stretches east and west from Orlando. It's also the central region of one of the presidential campaign battlegrounds. Like many Sunshine Staters, more than a third of whom are over 50, they are retired or thinking about retirement - and thinking even more about what the winning candidate will do to affect the lives of those who receive Social Security or Medicare.

The answers aren't so predictable. Retirees here love their Social Security and Medicare and largely feel they have earned and need both for secure retirement. But they do not automatically reject changes in the programs, either. Older voters have been following the debates over the escalating national deficit and debt and are aware of the financial stress that these programs put on the federal budget.

"It's a shame for people in my generation that it took so many years to get where we are, and then to find out the things we took for granted [like] Social Security are being so attacked," said Quinones, a retired executive for the American Soybean Association who lives in Clearwater. But at the same time, as longevity increases, "there's no doubt that the Social Security age has to be raised," he added.

Known for: Retirees, Hispanics and a razor-thin 2000 presidential contest that keeps reminding candidates not to take a single Forida vote for granted.

Campaign strategy: Fight for Latino votes; Romney and Obama each must convince undecided older voters that he can best protect Social Security and Medicare.

"They're wonderful," said José Gaztambide, 70, of his government retirement programs. Still, the Winter Garden resident added, "the government, like a family, needs to spend less money." With one in five Floridians receiving Social Security, and 18 percent getting Medicare, Social Security can be a potent political issue. Former President Bill Clinton managed to knock off primary foe Paul Tsongas in Florida in 1992 largely by unearthing one line in a Tsongas policy paper that suggested the cost-of-living increases for Social Security should be revisited.

The issues are already a big topic, especially since the two candidates offer divergent approaches. Mitt Romney has proposed raising the eligibility age for both programs, imposing a means test for Social Security, and giving Medicare-eligible Americans the option of buying private insurance with government support. (The proposed Medicare changes would not take place until 2022.) President Obama has vehemently opposed any private alternative to Medicare. The new health care law cut some $500 billion from the growth of Medicare Advantage spending, with the cuts hitting providers but not benefits. On Social Security, Obama opposes any plans to partially privatize the program.

Obama won Florida in 2008 but trailed in exit polls among voters 65 and older, who constitute 17.7 percent of the electorate. Polling shows Obama still lagging behind Romney in that age group. And the question of what to do with beloved — and expensive — benefit programs could determine the election. "Argh!" Sigrid Swick exclaimed as she wandered a Kissimmee community health fair, shaking her head in a vehement no when asked if either program should be partly or fully privatized. She's an "Obama Mama," Swick said, and will vote for the president.

Tammi Madison, meanwhile, is leaning toward Romney and takes a skeptical view of the future funding of Social Security and Medicare. "I'm not going to count on it," said Madison, who works for a designer handbag company. "My plans are really different from what my parents had planned."

The votes Swick, Madison and other Floridians cast will affect not just the election, but also the future of Social Security and Medicare.