Emergency: Help seniors affected by Hurricane Ian and Hurricane Fiona and your gift will be matched up to a total of $1 million. Find out more.

En Español |They came here for a retirement paradise: endless sun, open spaces and growth that promised higher real estate values. But now, sitting under the harsh lights of a university classroom in a foreclosure seminar, these older Nevadans glumly study the new reality of the state's housing and foreclosure crisis as they face the very real chance that they will be forced out of their homes.

Keep up to date with AARP's Election 2012 blog.

Is reversing the housing slump the key issues for Nevada voters? — Photo by Kevin German/LUCEO 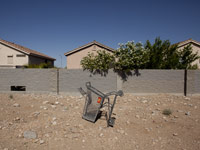 "Don't worry — it's a good investment." That's what lenders told Randy Amador, 50, when he and his now ex-wife purchased a Las Vegas area home. But today, Amador — who said he was surprised he even got a mortgage — is facing foreclosure, and expects that his former wife, along with their five children, will have to leave the home.

Amador has become just another statistic in a state that held the unenviable distinction of having the highest foreclosure rate in the country five years running before dropping to third place this summer.

The housing boom fueled growth and demographic changes, making the state a battleground, and 50-plus voters want to know what President Obama and Mitt Romney can do to ease the mortgage crisis.

The steps to foreclosure sound like the countdown to an execution. The Notice of Default informs the owners that they are behind in payments. The Danger Notice warns their home may be sold. The dreaded Notice of Trustee's Sale means their home will be sold for whatever cash can be had, though home values have fallen by nearly half since 2006. Government home programs haven't proved effective for many Nevadans who are near or past retirement, leaving them particularly vulnerable. They do not have decades to recover lost wealth.

Next: Most Nevada homeowners owe more than home's worth. »

Known for: Boom and bust. Mining, gambling and real estate cycles have created a landscape of bright lights and glitz as well as abandoned mines, shuttered casinos and vacant homes.

Jim and Amy Watt, both in their 60s, are trying to hang on to their Henderson home. "When we moved out here, I thought, 'This is our last home. We're going to die here,' " said Jim Watt. But the housing crisis has put that assumption in question. Worse, he said, so many homes in their neighborhood had fallen to foreclosure that everyone's property values dropped further. "I ain't moving, no," Amy said, grasping paperwork she hopes will help them fight foreclosure.

But like Amador and others at the seminar, they wonder how their bright vision for the future dimmed so quickly — and what their next president can do about it.

Two of every three Nevada homeowners owe more than their homes are worth, nearly three times the national average.

Michael Mooneyham, 59, is one of them. A resident of Henderson's Sun City Anthem community, he doesn't believe that helping banks is the answer. They were bailed out in 2008, Mooneyham said. His answer today: "Do a onetime bailout [for] the people of the United States."

His is a common attitude here, particularly among those who feel they have been misled by financial institutions. Other Nevadans place the blame on buyers. "Some people bought beyond their means," said Joe Madrid, 77, a Republican and a retired electrical engineer living in Henderson.

Regardless, said Barbara Buckley, executive director of the legal aid center that led the seminar, "we're ground zero in the foreclosure crisis." And Nevadans are still waiting for help as November draws closer.