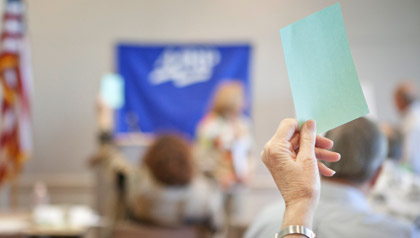 In Plano, a player in a simulated budget game holds up a green card indicating a "for" vote for one proposal to help balance the Texas state budget.

En español | "I would hate to be in their shoes," Manny Perez, 63, of Corpus Christi, said about Texas' legislators.

He had a new appreciation for their work after playing a simulation game developed by AARP Texas to educate its members about the real-life trade-offs lawmakers must face to balance a $180 billion, two-year state budget with an estimated shortfall of at least $27 billion (PDF).

"Do you cut or do you tax? Everybody's going to get mad one way or the other," Perez said.

To play the budget game, members at AARP chapter meetings first watch a slide presentation detailing where the state revenue comes from, how it is spent and the harsh reality of the budget gap. Next, they are given possible solutions, such as raising taxes, reducing spending or using the state's "rainy day" fund. The possible cuts are based on real proposals from state agencies.

Do you eliminate Medicaid coverage for hearing aids and save $1 million? Cut college students' financial aid by $50 million? Stop a performance award program for teachers to eliminate $280 million? After wrestling with the game, participants all agree on one thing: There are no easy answers with so much at stake.

"It's going to be real tough," said 68-year-old Leonard Strub of Allen, who played the game during volunteer training.

Participants act as senators in a super-condensed version of a mock session of the Texas legislature, lasting up to 90 minutes. They offer proposals, debate and vote, just as real lawmakers will do in the legislative session that runs through May 30. Even though it's just a game, disagreements occur.

"It's designed to mimic the process (PDF) that the legislature will have to go through," said Amanda Fredriksen, AARP Texas advocacy manager. "The idea is that they have to work as a body to find agreement. It's essentially trade-offs between raising revenue and cutting programs."

Among the revenue options are slightly increasing the franchise tax rate on businesses to generate $2.1 billion and increasing the tax on a six-pack of beer by a penny a can to raise $100 million.

Both the Texas House and Senate presented budget proposals in January imposing deep cuts without raising taxes or tapping into about $9 billion in the state's rainy day fund.

Rep. Jim Pitts, R-Waxahachie, chairman of the House Appropriations Committee, said the budget proposals were only a starting point. "This is just a reality check," he said. "It's a long road."

AARP Texas has criticized a proposed 10 percent cut in payments to Medicaid providers in that budget, saying it would take a heavy toll on long-term care.

Materials given to players encourage them to contact elected officials and urge them to protect long-term care funding.

Without being told AARP's positions, Perez said when he played the game, most of the approximately 45 "senators" were hesitant to cut education or Medicaid. Perez, a U.S. Border Patrol retiree, also opposed cuts in criminal justice.

Strub, an AARP congressional district volunteer who is facilitating the budget games in the Dallas area, said his fellow players weren't big on raising taxes, given the no-new-taxes view of so many Texas legislators.

Some participants wanted to spend the rainy day fund. But no matter how they tried, the group couldn't erase the shortfall.

Kelley Shannon, a freelance writer based in Austin, has covered the Texas state government for the past decade.