En español | One of Mexico's biggest challenges might not make headlines, but it affects millions of people living from the tip of the Yucatán Peninsula to cities across the United States and beyond.

It affects people like Roberto Muñoz Maldonado, 77, who's in many ways a typical Mexican retiree. He lives with his wife, Consuelo, 71, in a modest apartment the couple owns in Mexico City. He receives a small pension from the city — about $200 a month — and financial help from his eight children. A major source of income for older Mexicans is remittances from family. "We don't have much, but we have what we need," Muñoz Maldonado says. 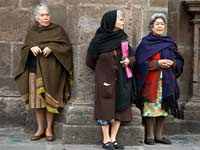 What's not typical is that his country, along with the rest of Latin America, now faces populations that are aging faster than those of the United States and Europe. While Mexico boasts a median age of 27 — nearly 10 years younger than the median age in the United States — the future tells a different story. By 2050, Mexico's median age will be 43, according to a new report titled “Living Longer in Mexico: Income Security and Health” by the Vicente Fox Center, AARP and the RAND Corporation.

“There are many opportunities and challenges that Mexico and the United States face with the growing aging population. Ensuring that Mexico is prepared for this rapid demographic growth is a priority area for Centro Fox,” says Vicente Fox Quesada, former president of Mexico. “We have enjoyed the opportunity to publish an in-depth report on income security and health in Mexico and to address common challenges with the United States.”

Collaborating on issues related to aging makes sense, says AARP Board Member Jacob Lozada. "In our nation, we have a large and productive Mexican American population. Working and conducting expert research with Mexico helps AARP and it's Multicultural Office better understand and serve the Mexican American community across the U.S. as well as their family members and friends living in Mexico."

And with Mexicans are living longer — the nation's life expectancy rose from 36 years in 1950 to 74 years in 2000 and continues to climb — "there's a golden opportunity for Mexico to be ahead of the curve," says Arie Kapteyn, director of the Labor and Populations Program at RAND and one of the study's authors.

With that in mind, Mexican President Felipe Calderón — building on the work of his predecessor, former President Vicente Fox — has set priorities to meet the needs of his maturing nation. Calderón says he's proudest of his efforts to extend health care coverage to everyone, a move that will have the greatest impact on Mexico's elderly. "We are about to reach universal health care coverage, which means there will be doctors, medicine and treatment for every Mexican who needs it," the president says.

But still more has to be done to prepare for Mexico's changing demographics, says Kapteyn. For example, the nation's pension system must be strengthened.

"We have a retirement savings system that consists of accounts for each worker that are managed very carefully," says Calderón, 49. "[This] will allow people to live with dignity when they retire." On a personal level, Calderón plans to work after his term ends in 2012, perhaps as a consultant or at a university, do a lot of writing and eventually participate in that federally-run retirement plan.

But fewer than half of the nation's workers — and only 16 percent of Mexicans 60 and older — participate in that pension plan because most of the workforce consists of "informal" workers who can't access the system. Muñoz Maldonado, who worked as a sound engineer on movies before his retirement 10 years ago, was one of those workers. Moving from one movie project to another, he was never employed long enough at one place to start a retirement account.

To help Mexicans ineligible to participate in the nation's social security system, the recently released AARP/RAND report recommends that Mexico extend to those workers the type of government-sponsored pension that Muñoz Maldonado receives until they can be incorporated into the existing system.

When it comes to health care needs, Muñoz Maldonado, who suffers from diabetes, is more fortunate. His and his wife's health care are covered by Mexico's Seguro Popular, which subsidizes medical care on a sliding scale. It's the same insurance that Calderón is expanding to cover all of Mexico's uninsured.

Muñoz Maldonado has another advantage: He and Consuelo belong to the Instituto Nacional de las Personas Adultas Mayores (INAPAM), a government agency that provides those 60 and older a host of services, from discounts on medicine and medical care to job training and placement services. Job training? In fact, about 46 percent of men and 15 percent of women age 65 or older remain in the labor force.

"The phenomenon of aging is new to the world," says Pilar Torres, an INAPAM official. "People used to die right after they retired. But now when a person turns 60, they have 20 years or more of life expectancy. We've been working to change the idea that older people are in rocking chairs … doing nothing more than watching television or knitting."

Working with INAPAM has changed Muñoz Maldonado's outlook, he says. After joining an INAPAM senior center, he found a new hobby — making stained glass — and, he says, a "new life."