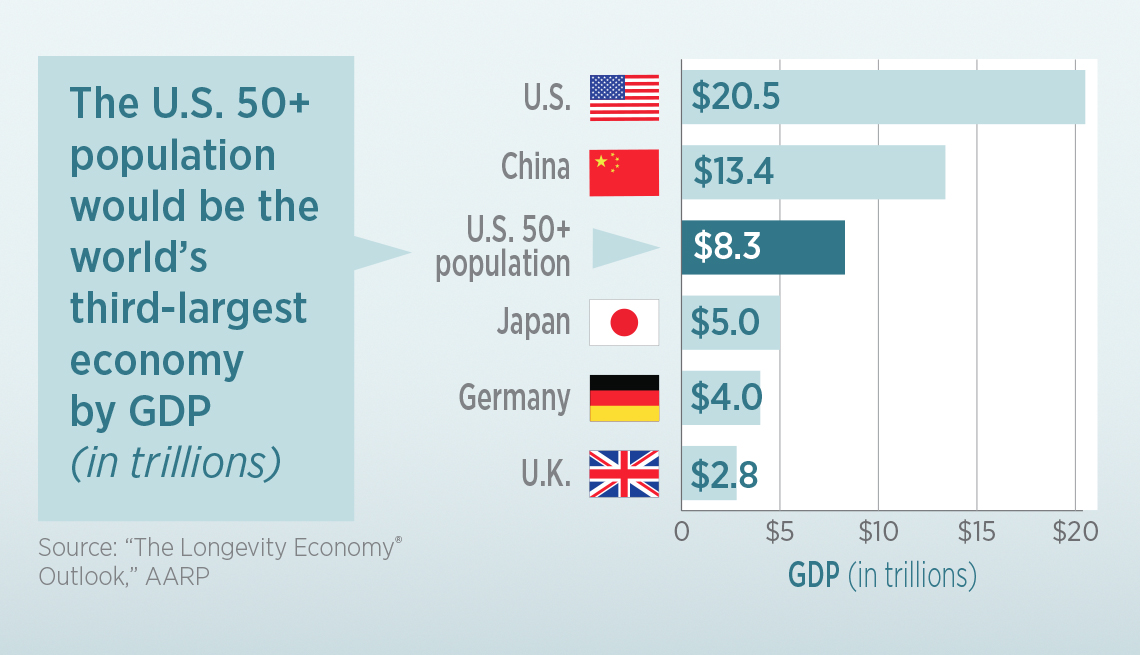 En español | Americans age 50 and up contribute so much to the U.S. economy that they’d constitute the world’s third-largest economy if they were counted as their own country, a major new AARP study finds.

The economic contributions of 50-plus Americans totaled $8.3 trillion last year, which puts them just behind the U.S. and China when measured by gross domestic product.

And that economic impact will grow significantly in decades to come, tripling to more than $28 trillion by 2050 as millennials and Generation Z begin to turn 50 in 2031 and 2047, respectively, the report finds.

People age 50 and older also contributed $745 billion worth of unpaid activities in 2018, in ways that broadly benefit society. They provide caregiving for loved ones, help to raise grandchildren, volunteer their time and support charities.

“As the number of people over 50 grows, that age cohort is transforming markets and sparking new ideas, products and services across our economy,” AARP CEO Jo Ann Jenkins says. “And as people extend their work lives, they are fueling economic growth past the traditional retirement age.

“They earn wages, spend more money, generate tax revenue, give back to social causes, and create demand for products and services that stimulates job growth,” she says.

The Longevity Economy Outlook report draws on national data on how much people age 50 and older spend, earn working and pay in taxes. That information was used to project the group’s effects on the economy overall.

Four key findings from the report:

1. People 50+ are a growing economic engine that benefits society now and in the future. 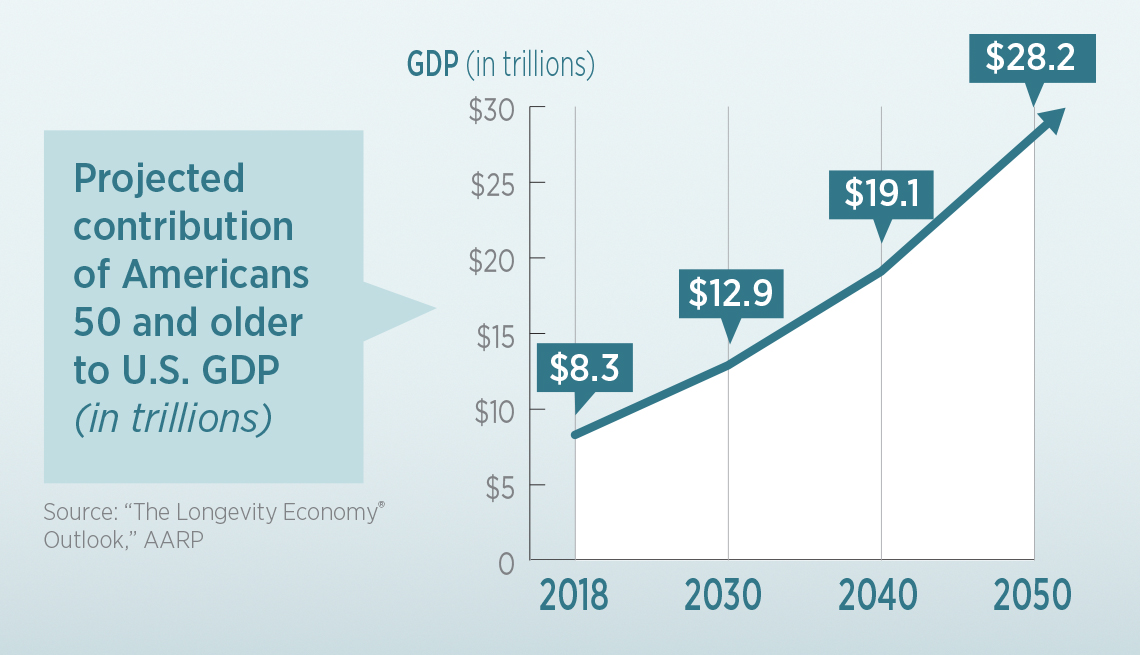 Contrary to the widespread view of older populations as an economic burden, the report “clearly shows that older adults are not a drain on society but a growing demographic that is transforming markets and is a key driver of economic growth, innovation and new value creation benefiting people of all ages,” says Jean Accius, senior vice president for thought leadership and international affairs for AARP, who led the research behind the report.

The dramatic increase in the number of people 50 and older in the United States has helped make them an economic juggernaut. The group now includes four generations: the “GI Generation,” the silent generation, boomers and some members of Generation X, while the first millennials will turn 50 in just over a decade.

More people are living longer, healthier lives, which lets them continue to work and contribute to the economy. There are more than 117 million Americans 50 and older — 35 percent of the total population — and the age bracket is projected to grow to 132 million people over the next 10 years or so. It will hit 157 million by 2050.

2. Caregivers who are 50 and over comprise a $604 billion “invisible workforce.” 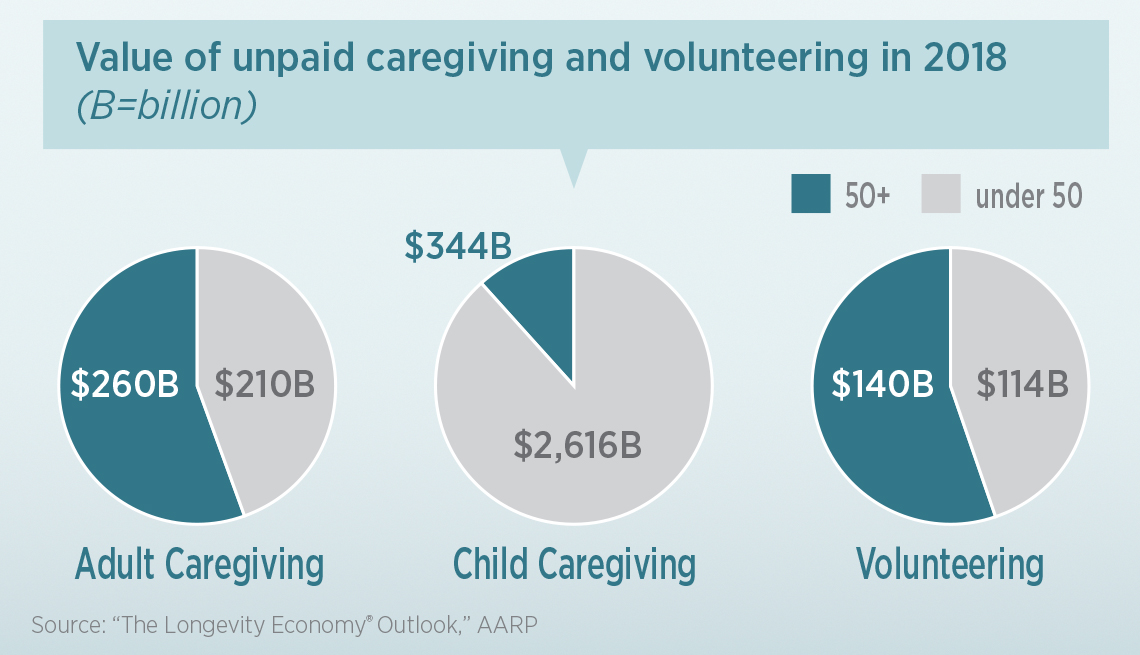 They may not be paid directly, but older adults acting as caregivers for loved ones are providing valuable services, worth an estimated $604 billion in 2018 alone, according to the study. As family caregivers, they tend to the daily needs of their aging parents, support their partners  — from injured veterans to others managing other disabilities — and some even serve as legal guardians for their grandchildren whose parents may be victims of the opioid crisis.

In addition to serving as caregivers — what Reinhard calls an “invisible workforce” — people 50 and older performed $140 billion worth of service through volunteer activities last year. All told, the 50-plus population contributed unpaid activities worth $745 billion.

“In the absence of these contributions, the cost to society — and to government more specifically — would skyrocket,” the report says.

The study urges policymakers and employers to find ways to better support older adults who have caregiving duties. For instance, Reinhard says that more employers should offer paid leave for caregiving or flexible work hours. The Caregiver Advise, Record, Enable (CARE) Act, which requires hospitals to provide more information and support to caregivers, has been passed by 40 states.

3. The spending and labor of people 50-plus support 88.6 million jobs.

That equals 44 percent of total employment in 2018. Both through the jobs they hold themselves and those that are created due to their spending, older adults help drive the nation’s workforce.

Certain fields stand out for employing experienced workers. The health care sector employed 7.3 million older adults in 2018. That field is projected to grow in the coming years, meaning even more demand for experienced workers, the study says. There’s a similar situation in education, which employs 5.1 million people 50 or older. Teacher shortages — an estimated 112,000 positions in 2018 alone —might mean more demand for older adults.

And adults ages 55 to 64 comprised roughly 25 percent of new entrepreneurs in 2018, the highest share of any age group. Starting businesses creates jobs for some while providing valuable products and services to others.

4. The market needs to catch up to the needs of the 50-plus population.

“The bad news is that attitudes and stereotypes about aging have not changed enough,” the study says. “And many products and services available to us as we age are woefully out of date.”

“As all generations navigate making the most of a longer life, new products and services are required,” says Accius. “Market innovation is essential.”

For example, in 2018 people 50 and older spent $140 billion on technology, and that number is projected to grow to roughly $645 billion in 2050, the report says. Some companies are considering what new types of technology products might be helpful for older adults — such as the development of virtual reality (VR) headsets for people with Alzheimer’s disease and different mobility devices — like seated electronic scooters or electronic exoskeletons — that could help older adults stay active.

And financial services are starting to test smartphone apps that give older adults more personalized control of their money — and also let their children or caregivers monitor the accounts for potential fraud or exploitation.

But more innovation is needed to meet the demands of this influential population. “Each and every business stands to gain from tapping into the 50-plus market opportunity,” the report says.