Is a generational war between boomers and millennials real or falsely perceived?

People over 50 may have felt their blood pressure spike while reading recent headlines casting them in the role of aggressor in a war against their children and grandchildren that they never declared, and had no intention of fighting.

The outlines of this perceived conflict are captured in the writings of economic journalists like Robert Samuelson, a 68-year-old syndicated columnist who gazed into the future and delivered this roundhouse punch to his own generation: "Older Americans do not intend to ruin America, but as a group, that's what they're about," he wrote. "The essential budget question is how much we allow federal spending on the elderly to crowd out other national priorities."

Samuelson is hardly alone in filing frontline dispatches from the war between generations.

"Young and Old Are Facing Off for Jobs" declares a headline in the New York Times. "Will Surge of Older Workers Take Jobs From Young?" the Associated Press asks. The wonkish National Journal presents "The Case Against Parasitic Baby Boomers." Staunchly libertarian Reason magazine screams in an online article, "Hey, kids, wake up! … Old people are doing everything possible to rob you of your money, your future, your dignity, and your freedom."

Your freedom! Who knew?

The basic arguments made in "seniors are selfish" articles follow a similar pattern. Social Security, launched in 1935, when the average life expectancy in the United States was 62 years, is now inadequate to handle an aging population that is living nearly two decades longer and growing in size. In 1940 there were 159 American workers supporting every Social Security recipient. Today, fewer than three.

As a result of an aging population, a far bigger cut of taxpayer dollars is being used to cater to the needs of the aging, critics note. Social Security and Medicare gobbled up 38 percent of the federal budget in fiscal year 2012. That percentage is growing. The latest government projections show Medicare's hospital insurance trust fund will be depleted by 2026, and Social Security's trust fund by 2033.

At the same time, many workers are staying on the job well past what was considered retirement age a generation ago. Some commentators have seen that as crowding younger workers out of the job force.

Alarmists use those statistics to paint a portrait of generational warfare. But are they mounting that picture in the wrong frame?

To paraphrase a slogan from the '60s peace movement, "Suppose they gave a generational war and nobody came?"

Paul Taylor, executive vice president of special projects at the Pew Research Center in Washington, D.C., explores that question in his book released in March, The Next America. He isn't convinced battle lines have been drawn.

Taylor and his Pew colleagues conducted opinion surveys and pored over decades of demographic data. Yes, there is a palpable anxiety about the lingering recession and long-term problems associated with entitlements, plus the runaway national debt. Yet Taylor notes this angst transcends age barriers. He found no signs of an intergenerational bloodbath brewing. It's all media smoke and no fire.

"The generation war just feels like a nonstarter," he says. "Look at the attitude of the combatants. … On these much deeper levels of whether they represent each other's values and get along, we found very little conflict."

Taylor's conclusions jibe with the anecdotal experience of Elfego Gomez, an organizational training consultant in Colorado Springs. It has become fashionable, he says, for business consultants to cater to the supposed challenge of integrating multiple generations in the workplace. "I think it's b.s.," he says.

Occasionally a client will insist that Gomez conduct a workshop devoted to generation gaps. He starts by asking participants a range of questions. Are you comfortable calling superiors by their first names? Do you prefer chunky or smooth peanut butter? "I'm trying to get people to see if age really is the defining thing, or are we just different people," says Gomez, a 56-year-old boomer. "We have more similarities than differences. And that's not determined solely by generation."

"On these much deeper levels of whether they represent each other's values and get along, we found very little conflict."

The Pew study found that the generational conflicts that existed between boomers and their parents were not nearly as common between boomers and their kids. And boomers have mellowed toward their parents. For example, 8 in 10 people in the millennial generation — those born after 1980 — and 9 in 10 boomers say those who are older have better moral values than they do.

Myron Atkinson, the 86-year-old founder of North Dakota Guaranty and Title Co., in Bismarck, has seven children, 17 grandchildren and five great-grandchildren. While he has not retired, his 59-year-old son Tim is chairman of the company now. If there is a generation war raging in this country, "within our family we're totally unaware of it," he says.

While there is no pronounced "cultural conflict" as in the 1960s, Atkinson, a child of the Depression, can't fathom why some of Tim's friends retire early or switch jobs so often. Tim tells his father that Dakotans have acquired "much more of a whole world view." When he graduated from college in 1976, moving 200 miles to Fargo was considered an almost exotic experience. Today high school students Skype with friends in Europe.

Boomers punched through social and gender barriers, softening the divide between succeeding generations. Tim Atkinson snowboards and hikes with his children and grandchildren. "I pal around with them in a completely different way than I did with my parents and grandparents," he says. "I kind of meet them in the middle and they meet me in the middle."

Elfego Gomez's daughter, Dominique, age 28, works for a software company in San Francisco. "Part of my relationship with my parents is different than what they had with their parents," she says. "I'm still their child, but they treat me as an equal." Gomez earned a dual graduate degree from Harvard and Stanford universities. She's self-sufficient, but many of her graduate school friends moved home. She says her generation is fundamentally pragmatic, not pugnacious: "There's not much rebelliousness."

Thirty-five-year-old Josh Kostic of Gulf Breeze, Fla., has doubts about the viability of the Social Security system, "but I don't look at it as 'blame the older generation.' " Kostic's grandmother, Hilma Jones, lives a few miles away. He visits often to help around the house. He's glad that she is able to collect Social Security: "She's one of those people who have worked so hard her whole life."

That's a common attitude toward Social Security and Medicare. The Pew survey found that nearly 9 in 10 Americans — including 8 in 10 young adults — believe those programs have been good for America. Majorities of every age group think the government should do more for older people.

At age 73, Hilma Jones enjoys being a hospital social worker. Her husband died 10 years ago, and she draws Social Security. "Thank God," she exclaims. "Social workers make squat!" Grandson Josh worries that she works too hard, and Jones thinks he "doesn't worry enough" about his financial future. But they are doing fine, as are her three children and four other grandchildren.

One reason a generational war can't gain traction is that it is hard to bite the hand that feeds you, or cares for your kids. Nearly a quarter of preschoolers are cared for by a grandparent in the U.S., and 1 in 10 lives in a household headed by a grandparent. The number of people living in a multigenerational household has doubled since 1970, to 54 million, according to Census data. And the wealth of one generation eventually benefits the next. Boomers have already inherited $2.4 trillion from their parents. Boomers themselves will eventually pass along a staggering $30 trillion to their children and grandchildren. 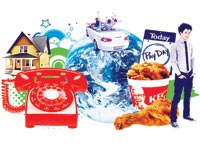 David Perry of Arlington, Va., is a 22-year-old who works as a fitness instructor while attending community college. Like most of his friends, Perry lives at home. His divorced mother, a schoolteacher, lets him stay rent-free. He gets health coverage under his father's policy. "My friends and I never really rebelled against people as [other generations] have," says Perry. They're focused on finding their way in a less-accommodating world, but not brooding about where the fault lies. "I'm thinking about trying to get a better job and better myself. I never thought about my mom taking my retirement and medical care away from me as I get older."

Alex Ivey, 24, lives in Washington, D.C. He majored in political science at Columbia University. He moved back with his parents in suburban Maryland after graduation, as he settled into a new job. After just three months, he moved out, something many of his postcollege-age friends have not yet managed. He believes his generation exhibits a frugality and civic-mindedness that harkens to World War II's Greatest Generation. His maternal grandfather belonged to that cohort and lived with Ivey's parents for 5-1/2 years prior to his death. "It was an incredible learning experience," he says. "Ninety-three years of life. How can you not glean some lessons from that?"

Sue LoCoco, 63, and her husband, Nick, 68, own a 3,600-square-foot house in Santee, Calif. They purchased it in tandem with their daughter and son-in-law, who have four children. The two families split the mortgage and utility payments. Everyone eats dinner together about four times a week, which saves money on food. They soon discovered additional benefits. "It's more fun," says Sue. "I don't have a big house to clean. We see our grandchildren more than we did before."

Their combined household is a perfect metaphor for generations learning to adjust to 21st-century realities. Author Paul Taylor is himself living the Next America life. One of his three children lived at home until his early 30s. Taylor's wife babysits one of their grandkids two days a week and keeps a watchful eye on her elderly parents. Such is the new math of modern living. It's not necessarily the fault of boomers or political gridlock or globalization.

"A lot of this is the fruit of good news," says Taylor. More Americans are living longer, healthier lives. "Who can be against that?"

Tom Dunkel is an author and writer based in Washington, D.C.