En español | The day a delegation arrives at the Asile St. Vincent de Paul nursing home, Sister Claudette Charles' legs are throbbing from arthritis. Even in February, the temperature has hit the 90s by midmorning, the sun is blaring down, and she's wilting from the thick, waist-high circulation hosiery she wears beneath her slate-blue habit. Yet when the AARP delegation arrives, she springs to life, scampering to pump the hands of those she calls her guardian angels. In January 2010, the nursing home she operates in Léogâne, Haiti, was destroyed by the magnitude 7.0 earthquake that killed at least 150,000 Haitians and smashed houses, businesses, schools and other structures. As many as 30,000 of the seaside town's residents died, 90 percent of the town's buildings were turned to rubble, and bodies were piled deep beneath thick dust. The elderly were often abandoned in tiny clearings, quietly weeping as the children of the village wailed with grief. The nursing home and school that Sister Claudette and the other nuns had helped build over three decades lay in ruins. The devastation "broke my heart," she says.

Within a week of the disaster, AARP members and AARP Foundation, the charitable arm of the association, raised $1.5 million to aid the estimated 84,000 Haitians over age 60 who had been harmed or displaced by the disaster. These people, according to the United Nations, were the most vulnerable victims of the quake. With the donation, AARP Foundation helped fund HelpAge USA, a nonprofit that focuses on the needs of older people and that administered the relief aid from AARP and others.

I covered the earthquake in Haiti four years ago and have been back a dozen times since, several times with my children. In February, my partners at AARP asked me to travel to Haiti to follow the association's leaders — Barry Rand, Foundation President Lisa Marsh Ryerson and Debra Whitman, AARP executive vice president for policy, strategy and international affairs — who wanted to determine whether AARP members' money was spent wisely and well. 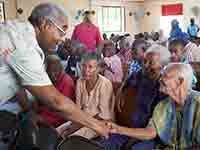 In the immediate aftermath of the quake, the donations paid for water, food, shelter, medicine, walking sticks, eyeglasses and clothing. In addition, the program supported medical consultations for more than 9,000 older people at clinics run by HelpAge's health partners, as well as the training of more than 200 home-based caregivers, who paid regular visits to 4,000 of the most frail older people in Haiti's tent camps for refugees of the disaster.

Walking through dusty streets lined with rebuilt structures, Ryerson says the $1.5 million in donations helped with "hunger and housing and isolation and health. In fact, we've achieved some results. That's the inspiring part."

Rand is clearly touched by the still-visible devastation and the response by so many AARP members.

"In the end," he says, "our members want to make sure people are taken care of, if there's a chance to get it done. If it takes a little money, they take the money out of their pocket and they contribute."

The AARP delegation travels to other parts of Haiti to meet some of the 13,000 residents who received emergency medical attention and now have medical care paid, in part, by HelpAge. Along the way, we drive past recovering neighborhoods where HelpAge once provided tents and tarps, phone cards and food, health education and health care.

We visit several Older People's Associations (OPAs), established by HelpAge to create "friends" in the refugee camps. Older people were paid $5 a day to keep an eye on their more vulnerable elderly neighbors.

Bertin Méance, the first HelpAge employee in Haiti, is particularly proud of the long-lasting work of the associations. Built on emergency funds, which are meant to be immediate and short-lived, the OPAs continue today.

Laguerre Victor, 74, introduces the neighbor he has adopted, Benoit Clerpha, who is about a decade older. After the quake, Victor was a paid friend to about 10 elderly Haitians who were displaced or injured. The payments have ended, but he still visits many of those people.

HelpAge taught Victor basic health care. Now, when he visits Clerpha, he gently encourages him to elevate his feet for improved circulation. Then Victor sits with his friend on the porch, occasionally patting his head.

Nicole Ferdinand, coordinator of the OPAs in Léogâne, introduces her friend Rosalie Ajax, who lost both her home and her daughter. She is raising her daughter's two children on her own.

"She is parenting small children, 8 and 10, at a time in her life when we would expect that she would receive care from her family," Ryerson says. "The middle is gone in her family."

"What we are trying to do is make the community better. It happens to be off of a disaster, but it's made people look at themselves and look at what's happened to the victims and say, 'How can I help?'"

The OPAs also loan small amounts of money to entrepreneurs, mostly women, to start or rebuild a small business and then repay the loan — so the money can be lent to others. A recipient of a $350 loan, Elirose Sineus, rebuilt her quake-damaged beauty-products market stand, paid back the money with interest and is now looking to expand.

Florence Elie, director of Haiti's Office for the Protection of Citizens, says Haiti's elderly population is in a "fragile and alarming state," with low life expectancy, scant medical care and housing, and reliance on children who also suffered harm in the earthquake.

"It was important to see firsthand the impact of our members' contribution in Haiti, which provided emergency relief in those first critical days following the earthquake," Whitman says. "Natural disasters disproportionately affect older people, and that's why AARP has raised funds to help those affected by disasters such as Katrina, Sandy and Typhoon Haiyan in the Philippines."

As the tour ends, Rand is moved as he says goodbye to the elderly women in the courtyard of the Asile St. Vincent de Paul nursing home. The women rise from wheelchairs to offer him hugs of gratitude. He finds it hard to walk away. So, for now, he doesn't, lingering to survey their faces and scan the buildings where they will soon take afternoon breaks and watch TV.

"What we are trying to do is make the community better. It happens to be off of a disaster," Rand says gently, "but it's made people look at themselves and look at what's happened to the victims and say, 'How can I help?' "

Soledad O'Brien is the CEO of Starfish Media Group and a broadcast journalist. Her documentaries and reports appear on HBO's Real Sports, CNN, Al Jazeera America and National Geographic.

Since 2005 the Foundation and AARP members have contributed more than $8.4 million to help vulnerable older people harmed in natural disasters. In addition to aiding victims of the earthquake in Haiti, the Foundation has helped older victims of Hurricane Katrina, tornadoes in Oklahoma, Superstorm Sandy, the tsunami in Japan and the typhoon in the Philippines.