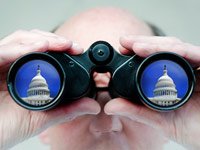 C: On Jan. 25, 2013 AARP wrote to the Secretaries of the U.S. Dept. of the Treasury, Dept. of Labor, and Dept. of Health and Human Services commenting on the incentives for nondiscriminatory wellness programs in group health plans urging caution that policies not have the effect of denying access to care or unfairly discriminating against those with health conditions. (PDF)

S: On May 8, 2013 AARP submitted a statement on “Employment Discrimination Issues Raised by Workplace Wellness Programs” to the U.S. Equal Employment Opportunity Commission (EEOC).  AARP is pleased that the EEOC is holding this hearing on the civil rights issues raised by workplace wellness programs, and hereby submits this statement for the record. (PDF)

L:  On October 7, 2013 AARP wrote to the entire U.S. Congress urging them to take steps to avoid default on our national debt and avoid risking benefits for current Social Security and Medicare beneficiaries or the health of our fragile economy.  Older Americans care very deeply about our country, and many are grandparents who feel a sense of stewardship and responsibility to make sure that their grandchildren enjoy the same opportunities and benefits our great nation has provided to them.  At the same time, millions of older Americans rely every day on their Social Security and Medicare. (PDF)

T: On August 29, AARP, on behalf of more than 37 million of its members and all Americans age 50 and older, provided testimony on so-called pension derisking. For decades, AARP has worked to preserve and strengthen defined benefit pensions as well as the Employee Retirement Income Security Act’s (ERISA) protections for pension participants and beneficiaries. Defined benefit pension plans have proven themselves to be reliable, efficient, and vital mechanisms for ensuring retirement income security for American workers and their families. Such plans, however, increasingly have been supplanted by defined contribution arrangements such as 401(k)-type plans, which shift all of the asset-building, investment, and longevity risk to employees. Twenty-five years of experimentation with shifting the risk for retirement security from employers to individual workers is contributing to a generation of retirees who are at high risk of accumulating too few assets, and too many who will simply outlive the assets. (PDF)

L: On March 19, AARP wrote a letter to the entire House of Representatives to express serious concerns with the House Concurrent Resolution on the Budget for Fiscal Year (FY) 2014. While the House Republican budget proposal offers ideas for confronting our nation's deficits and debt, AARP believes the proposal lacks balance, and it jeopardizes the health and economic security of older Americans. (March 19) PDF