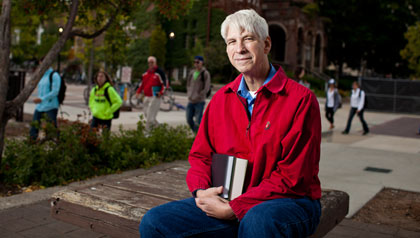 Steve Powell, 64, of Madison, audited several classes at the University of Wisconsin-Madison as part of a state program that allows people 60-plus to sit in on courses for free.

Steve Powell has discovered one of Wisconsin's best-kept secrets: State residents age 60-plus can audit classes at any of the University of Wisconsin's 26 campuses for free.

Since his retirement, the 64-year-old Madison resident has audited classes in Latin, Chaucer and medieval manuscripts. Now he is considering art history. "The best part is that there are no tests and no papers," Powell said.

At the University of Wisconsin-Madison's campus, enrollment in the program, created in 2000, has more than tripled to about 370 students a semester, said Judith Strand, the assistant dean in the Division of Continuing Studies.

The most popular class is music performance, she said. History, philosophy and religious studies are next in popularity.

Paying students get preference for enrollment, so not all classes are available. Auditors must get the professor's approval and generally may not take classes with labs such as languages or sciences.

That's not always the case, said Beth Weckmueller, executive director of enrollment studies at the University of Wisconsin-Milwaukee, where 367 auditors enrolled last fall.

Class participation is determined by the professor. In general, an auditor is encouraged to be a fly on the wall.

Older students, often more comfortable with speaking up, can dominate a discussion, said Rachel Baum, a lecturer in Jewish studies. While most hold back so the younger students can lead, sometimes they add a valuable perspective.

Next: How classes may benefit Madison. >>

Genie Deutsch, 79, an auditor on the Milwaukee campus, said she takes classes such as Jewish studies that weren't offered when she was a college student at Cornell more than 50 years ago.

She takes a shuttle to campus. "I love talking to the students on the bus," Deutsch said. "I ask them what they are majoring in and about their favorite professors."

The classes also may be a benefit to downtown Madison. Mary Carbine, executive director of Madison's Central Business Improvement District, noted that some of the condominiums occupied by seniors tout their proximity to the university.

"Retirees make up a big part of our downtown," Carbine said. "They are in a new stage of their lives, and they are active, engaged people who are attracted to what the university and downtown have to offer."

While the classes in Madison and Milwaukee are popular, some of the smaller campuses have attracted only a handful of students.

"Many who are 60 or better still have to work. This is a good way to brush up on job skills," Bazile said.

Jim Flaherty, communications director for AARP Wisconsin, said that Powell and Deutsch are AARP advocates who help inform other members about issues. The auditing program is an extension of their community involvement.

"We think this program is a great way for folks who are 60-plus to take the next step in the lifelong learning process," Flaherty said. "The brain is a muscle that needs to be exercised."

Marie Rohde is a freelance writer in Glendale, Wis.