En español | If you like investing in largely unregulated currency markets noted for appealing to criminals, then cryptocurrency is right up your alley.

Just last May, hackers stole $40 million from crypto exchange Binance. But even if you have never had any problems using digital currency, you shouldn’t be surprised that the world of Bitcoin, Ethereum and other cryptocurrencies is rife with fraud.

A cryptocurrency is an electronic currency — not paper bills or metal coins — that operates outside governments and central banks, such as the Federal Reserve Bank. Owners keep cryptocurrencies, such as Bitcoin, in electronic wallets, which are password protected. You can transfer money between wallets anonymously to buy a pizza, sell a car or even pay a ransom, provided the other party in the transaction accepts Bitcoins.

Some of those other parties include AT&T, Microsoft and Overstock.com, although many businesses don’t accept cryptocurrencies.

Bitcoins can be bought and sold on exchanges using U.S. dollars and other traditional currencies. And new Bitcoins are created by harnessing a computer to solve increasingly complex mathematical problems, a process called “mining,” which requires major computing power and lots of electricity. Those who solve the problem are rewarded with a Bitcoin.

Bitcoin and other cryptocurrencies are recorded in a ledger called a blockchain, which is virtually impossible to change.

The value of cryptocurrency shifts daily, according to market conditions. Those swings can be enormous. In the past five years, Bitcoin, the most widely traded cryptocurrency, soared 7,884 percent, from March 31, 2015, to its record high of $19,497 in 2017. It now trades for about $10,150. Currently, there are more than 1,000 cryptocurrencies worldwide, the three largest of which are Bitcoin, XRP and Ethereum.

Their drawbacks as currency are obvious: Most people prefer a currency that doesn’t fluctuate much. If you had agreed with your landlord to pay him five Bitcoins a month to rent your apartment five years ago, your rent would have rocketed from $1,221 in March 2015 to $50,700 in February 2020, as the value of the digital currency soared. 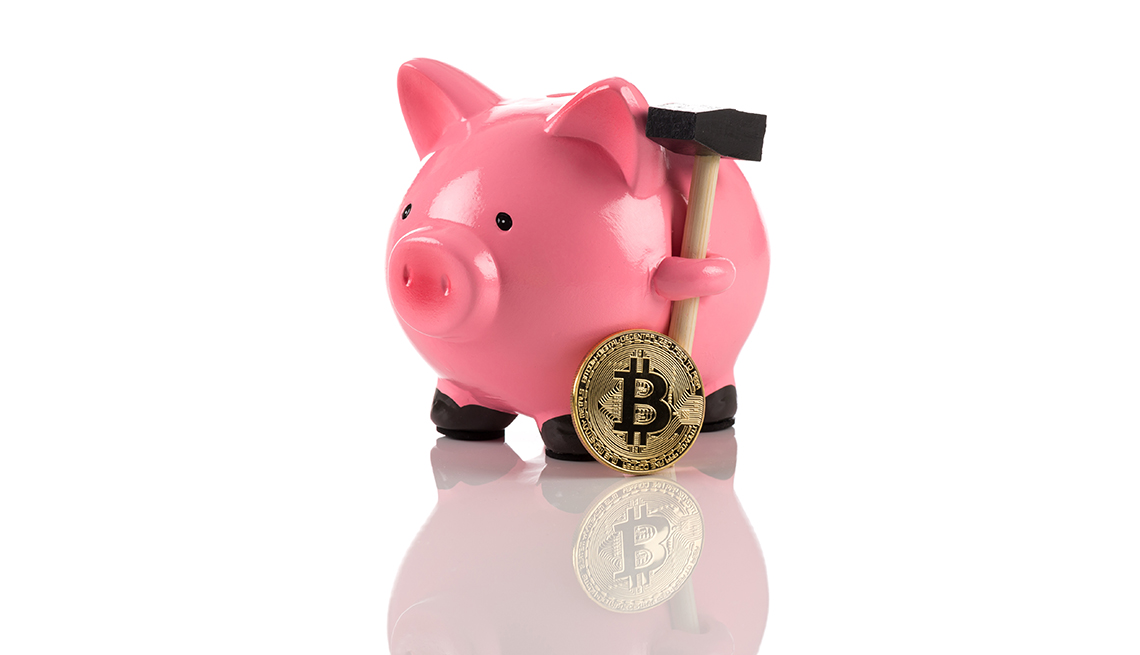 Cryptocurrency: Any one of a number of unregulated electronic coins, such as Bitcoin, used for payments.

Mining: To mine a coin, you have to solve complex mathematical puzzles on a block of transactions, which is eventually added to the blockchain. Current mining operations use specialized hardware and software, as well as plenty of electricity.

Blockchain: The public ledger of crypto transactions. It’s essentially unalterable and anonymous: You can tell that transactions have been made but not necessarily by whom.

Exchange: A place where you can buy and sell different kinds of cryptocurrencies. These coins can then be deposited back to a virtual wallet that supports the coin. Sometimes it’s also possible to convert the digital currency to dollars.

Because all trades are conducted anonymously online, you’re putting a lot on the line when you transact in cryptocurrency. “You’re interacting with people you never meet and you can never visit,” with currency you can’t touch, says Joseph Rotunda, director of the Enforcement Division at the Texas State Securities Board. “It’s a medium that caters to fraud.”

One problem is market manipulation. Large holders of a cryptocurrency, called “whales,” can bid up the price of, say, Bitcoin, drawing in new investors eager to get in on the action. As the currency rises, the whales take their profits and leave new investors with losses, according to University of Texas professor John Griffin and the Ohio State University professor Amin Shams.

One of the easiest ways to run a scam is to create a new cryptocurrency, particularly when Bitcoin is on a rally. Investors, worried about missing out on the crypto boom, quickly jump in.

For example, two California men rolled out a new coin, Bitqyck, in 2016, when rival Bitcoin was starting its run to $19,497. Bitqyck was extremely affordable: It sold for 2 cents. Its promoters, Samuel Mendez and Bruce Bise, said Bitqyck would jump to $3 and stay there. As of Nov. 11, 2018, Bitqyck had fallen to $0.000572. Bise and Mendez settled a case with the Securities and Exchange Commission last August, agreeing to return their ill-gotten gains, with interest, and pay civil penalties of more than $890,000 and $850,000, respectively.

More recent frauds have centered on selling interests in Bitcoin mining schemes and paying extra to investors who bring in new players. Last December, for example, three men were arrested for their roles in BitClub Network, a Ponzi scheme that allegedly took $722 million from investors. Such schemes take money from new investors to pay off earlier investors, until the entire pyramid collapses.

Other schemes have focused on generating power for Bitcoin mining. Creating new Bitcoins globally takes tremendous amounts of electricity — currently about the amount that Switzerland consumes in a year, the BBC has reported. One scheme, LeadInvest, falsely claimed it had a “green” Bitcoin mining operation in Iceland that was endorsed by Supreme Court Justice Ruth Bader Ginsberg and three former U.S. solicitors general. The scam was closed down by Texas regulators in March 2018.

Other schemes offer outlandish returns from investments in Bitcoin mining. Ultimate Assets, based in Arlington, Massachusetts, promised to pay out a $5,000 return for a $500 investment, meaning those who invested $5,000 would get $50,000. The scam was closed down in September 2018 by Texas regulators.

“Crypto fraud shows little signs of slowing down,” says Rotunda, of the Texas State Securities Board. In 2019, 20 to 25 percent of the securities fraud cases in the state “had some crypto aspect.” The North American Securities Administrators Association, a Washington, D.C.-based nonprofit, declared cryptocurrency fraud one of the top consumer threats for 2020.

Promoters of these schemes get their money right away, and victims often lose everything. “They’re promising a very safe way to diversify from the stock market, and they put it into a market that’s largely unregulated,” Rotunda says. But, he says, ultimately, the driving force behind crypto cons is fear of missing out on red-hot gains that never emerge.