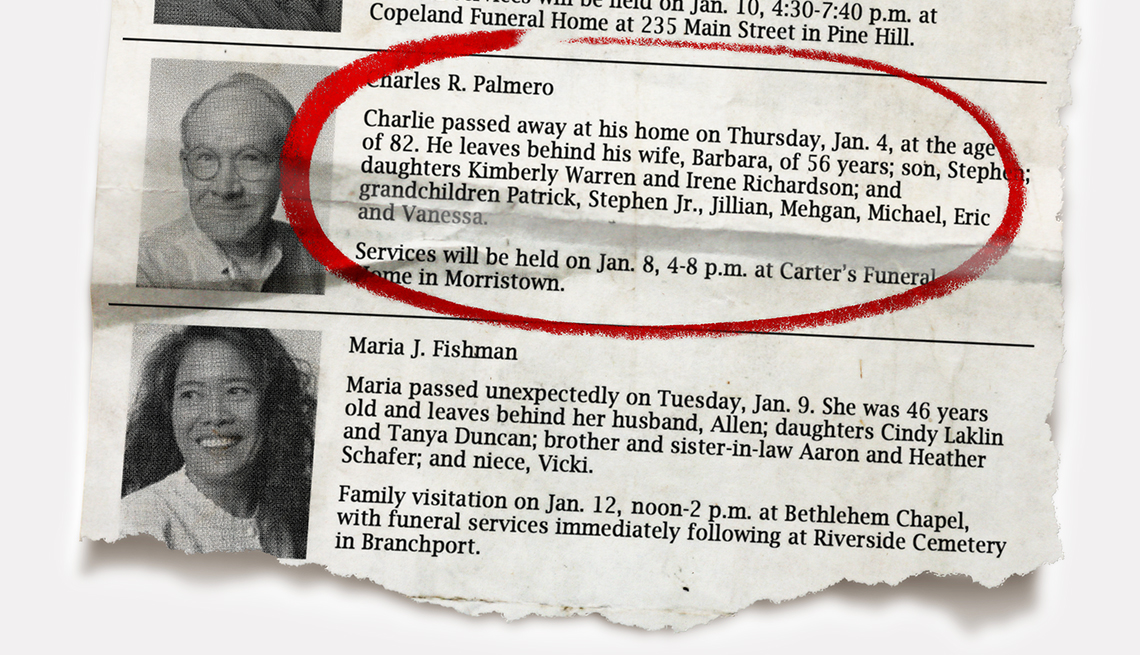 More con artists are targeting the recently deceased by combing through obituary notices.

Publicly sharing personal information is risky enough in everyday life. It gets worse in death. It’s never wise to let strangers know your name, address, birth date, birthplace, family members’ names or even hobbies, whether you post the info on social media, take surveys or fill out product registration forms. But obituaries can take the risk to a whole new level. When published in newspapers and websites, they can spoon-feed scammers the precise nuggets they need.

We all want to acknowledge a loved one’s life completed. But be aware that the devil is in the details. The more personal facts you provide in an obit, the greater risk of scams—for the departed and survivors alike.

When it’s time to write the notice, give the deceased’s age but leave out the birth date, middle name, home address, birthplace and mother’s maiden name. Don’t even include the names of family survivors. This last advice will be hard to follow, but otherwise you put family members at risk of scams like these.

Each day, thousands of dead people fall victim to identity theft—costing their survivors pain and financial loss. Nearly 800,000 people a year are specifically targeted after death, because no one’s checking their credit reports. With details gleaned from an obit, crooks can often purchase or figure out the person’s Social Security number to fraudulently open credit card accounts, apply for loans or even file tax returns to collect refunds. (The first five digits of a Social Security number are linked to a time and place of birth.)

So spare the details in an obit. And quickly send requests to each of the major credit-reporting bureaus—Equifax, Experian and TransUnion—to flag the person’s account as “deceased.” This permanently stops new credit from being issued in the person’s name. You’ll need a certified copy of the death certificate, proof that you are the executor or spouse and other details about the deceased.

You should also notify the Social Security Administration (800-772-1213), the IRS, banks, insurers, brokerages, credit card issuers and mortgage companies, in case scammers approach them. Also, close down accounts on social media sites such as Facebook and Twitter.

Scammers use names published in obits to pose as grandchildren of the deceased, calling grieving survivors with sob stories about being mugged or arrested and needing money. Research shows that with any scam, your vulnerability is highest in the three years after a major stress. Obits are pure gold for scammers, who can target grieving spouses immediately following the death and seem credible by citing names.

In the early days of this now-widespread scam, AARP’s West Virginia chapter discovered its magnitude by interviewing recent scam victims and finding a common thread: All reported having had a recent death in the family, and all had published obituaries listing the names of the grandchildren.

Crooks often call spouses, children or siblings to make a claim that survivors must repay the deceased’s debts. Not true. Unless you cosigned the obligation or are otherwise legally responsible, debts are paid from the estate—not from the pockets of relatives. Anyone saying otherwise is deceiving the grieving for a quick buck.

In another name-dropper, self-described insurance agents and attorneys get in touch with survivors to claim the departed took out a huge (but often “secret”) life insurance policy. But before benefits can be collected, a final premium (or taxes, handling fees, etc.) must be paid. Legit insurance companies don’t request upfront fees by wire transfer or prepaid debit card.

If the deceased’s address and the time of the memorial service are in the obit, burglars know when to strike the unoccupied home, as well as those of neighbors paying respects. Leave the home address out and have a friend or neighbor forgo the funeral to keep watch.

Although reports of this scam are rare in the United States, it recently led authorities in Britain to warn against publishing obits at all. Reason: They can be fodder for scammers who seek payments from survivors in exchange for supposed messages from beyond the grave—and threaten an evil curse if money doesn’t arrive.