Superstorm Sandy may have come and gone, but her flood of fraud continues.

Scams usually follow any natural disaster, but crooks have been especially opportunistic in the wake of this historic hurricane. While folks whose homes were damaged or destroyed need to guard against rip-off repairmen, everyone needs to be aware of traditional post-disaster ploys, as well as some new Sandy-centric schemes.

Charity scams. Even before Sandy made landfall in New Jersey, more than 1,000 new websites were registered with the words "Sandy," "relief" or related keyword search terms in their addresses.

Some were created by construction companies, lawyers or repair companies for potential business opportunities. But most, say experts, were opened by scammers. 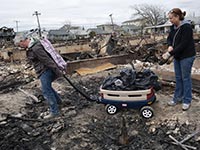 Local residents return to widespread damage and fire that destroyed many houses, caused by Hurricane Sandy in the Breezy Point section of the Rockaways in Queens.

A common tactic is to direct well-meaning but unsuspecting people to fake charity websites, where donations and credit card numbers are stolen. The organization's supposed name may be very close to that of a well-known national organization.

To draw people to those sites, Sandy also produced a big spike in email and cellphone text spam, with such messages as "Help Sandy Victims," reports Symantec, maker of Norton antivirus software.

You should know that while legitimate charities may publicize donation campaigns in the media or on their own websites, they typically are too busy to make individual requests in the aftermath of a disaster.

So before donating, vet charities at the website charitynavigator.org. Read this IRS fact sheet about how to fend off charity scammers.

Identity theft. In one new ploy, residents of some states have been getting phone calls from scammers falsely claiming that Social Security Administration computers in Sandy's path were damaged by the storm — and that benefits would stop unless those called provided their Social Security numbers.

Luckily, there are no reports of anyone falling for this lie.

Spam and fake Sandy charity websites can also play a role in ID theft. Once you visit such a site, you may be invited to click on links that secretly install identity-stealing software on your computer. Or you're taken to online surveys that try to collect your personal information.

Investment scams. Can you get Big Gains from the Big Storm? The Securities and Exchange Commission warns of Sandy-related scammers "touting companies purportedly involved in cleanup efforts ... Know that promises of fast and high profits, with little or no risk, are classic signs of fraud."

Flood-damaged cars. If history repeats itself, as many as half the vehicles that Sandy swamped will wind up for sale on used-car lots across the United States. They'll arrive there courtesy of unscrupulous vendors who purchase salvage cars at auction (supposedly for spare parts), clean them up and sometimes move them out-of-state, where it can be easier to obtain titles without disclosing storm damage.

So if you'll be shopping for a used car in coming weeks or months, protect yourself from buying a water-soaked lemon. Read this AARP story on how to spot a flood-damaged car.

Sid Kirchheimer is the author of Scam-Proof Your Life, published by AARP Media-Sterling.