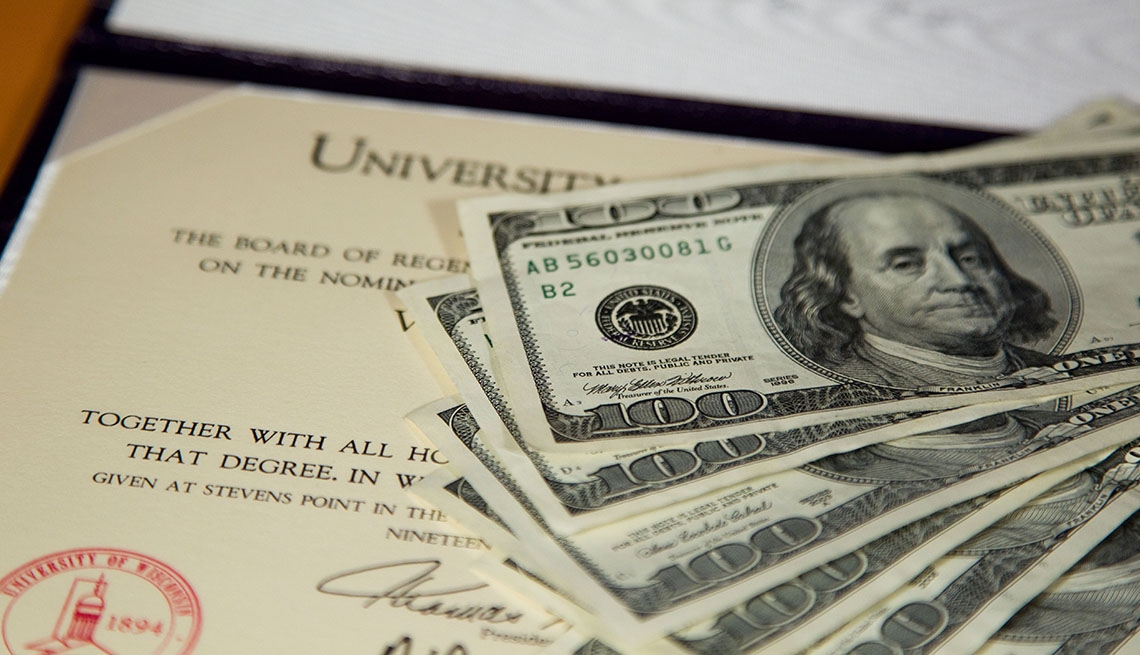 En español | The rapidly rising costs of going to college are threatening the future retirement hopes of younger generations in ways their parents and grandparents never had to grapple with, according to a new report from AARP.

When the oldest baby boomers entered college in the mid-60s, the annual published cost of attendance at a four-year public university was $951—or $7,256 today when adjusted for inflation, the study says. But today's incoming college students face published average costs of $19,000 a year at public, four-year schools, more than two-and-a-half times the amount boomers faced.

These higher prices lead many families to borrow, saddling students and recent graduates with debt that poses a major threat to their financial security when they retire, the study says. “[I]f borrowers’ loan payments partially crowd out retirement savings during the first 10 years of work, they will face retirement account balances that are up to 39 percent lower than for recent graduates without debt,” the AARP report says.

In decades past, the thinking went that “if you just work hard enough” in college, “opportunity will be available for you,” said Joni Finney, a scholar on higher education at the University of Pennsylvania. “I'm just not sure that's a good answer for this generation."

The rate that college costs are rising has accelerated over the years, according to the AARP report. For example, when the first Gen Xers went to college in 1983-84, they confronted costs that were 11 percent higher than the first boomers did in 1964. But when the first millennials enrolled in college in 1998, costs had climbed another 45 percent over what Gen X encountered. And Generation Z arrived on campuses in 2015 to prices that were 65 percent higher than the first millennials paid.

"College today isn't something that many students and parents can easily cover out of pocket, save toward, or pay for through work,” said Joe Valenti, author of the AARP report. “The benefits of a degree are there, but increasingly require borrowing."

"As recent graduates struggle to address their student loan debt as the result of these increased costs, they will face added financial burdens as they age,” the AARP report said. The ability to contribute to retirement plans is potentially one sacrifice that can result from stubborn loan debt.

Young graduates with college degrees know they should put money away, said Soncia Coleman, senior director of program at the nonprofit advocacy group Young Invincibles, but early in their careers they feel like “it's an impossibility."

"They're putting off these milestones, American dream-types of things, like saving for retirement, having children, buying homes,” Coleman said.

Last year, Young Invincibles found that Baby Boomers who borrowed to earn their college degrees had $89,000 in median wealth when they were between the ages of 25 and 34 in 1989. The adults who were in that same age group in 2016 who had borrowed to earn a degree had negative wealth of $1,900.

Assuming that workers without student loan debt start putting aside 5 percent of their wages toward retirement upon graduating from college and gradually increase savings over time, the AARP report concludes that a “lower-income worker with $30,000 in student loan debt would need to work nearly 7 years longer than one without student debt to achieve the same retirement account balance on a standard repayment plan.”

And as college debt becomes more of an inter-generational crisis, with Americans over 50 taking on a greater share of the student loan burden, retirement horror stories are becoming more prevalent. Around 114,000 Americans ages 50 and up had part of their Social Security benefits garnished because they defaulted on student loans in 2015.

Fueling the surge in student-loan borrowing – which grew from $455 billion to $1.5 trillion between 2004 and 2018 – is the growing cost of college itself. Theories abound for why college has become more expensive.

States have committed less higher-education funding per-student in the past decade, in part because costs for other public services like health care have risen. But tuition also goes up because colleges “simply can do it and get away with it,” said Finney of the University of Pennsylvania, where she leads the Institute for Research on Higher Education. “They know that people don't have that many choices. If you don't go to college, your [career] choices are going to be limited."

She also faulted some colleges and universities for competing to be considered more prestigious based on the students and faculty they attract. The desire to become more research-focused, which requires more expensive equipment and professors who teach fewer classes to spend more time in the lab, can lead to increased costs. Another culprit is academic mission creep in which public institutions “want to have a major in just about anything,” Finney said.

Meanwhile, colleges also have been adding more non-teaching staff, in part to offer additional services and academic support to students.

There are some options that could help borrowers better manage their student debts, such as signing up for federal repayment plans that lower monthly payments if the wages of borrowers are too low. But despite being around for a decade, many borrowers who could benefit from it aren't enrolled in these income-driven repayment plans.

Young Invincibles, like several other organizations and academics, wants Congress to change how borrowers sign up for income-driven plans, enrolling them automatically rather than making them choose to opt into these options as is the current process.

Colleges could also improve the transparency of their costs. For example, some colleges list loans as financial aid, a deceptive tactic that often leads families to think they have been awarded a scholarship.

"We have made it almost impossible for even the most sophisticated consumers to understand the cost of college,” Finney said. “I don't think this is a problem with students being bad consumers."