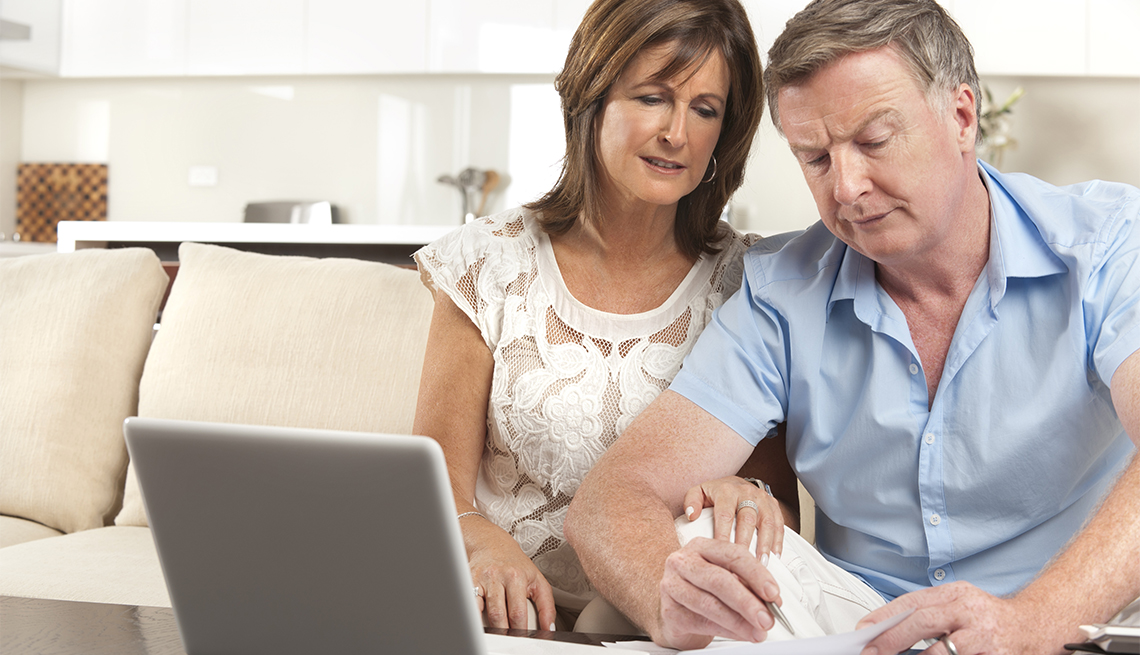 En español | When Louise Griffin visited a state university in the Southeast with her high school marching band, she fell in love with the school. It was, she declared, where she wanted to go. No matter that she lived in Pennsylvania, where a public college probably would have cost less. “She had her heart set on this one,” says her mother, Esther. (At her request, this family’s names have been changed.) Louise’s high school offered little college counseling, so Esther turned to friends and acquaintances for financial advice. “People I talked to were, like, ‘Oh, it’s easy. Just take out Parent PLUS loans,’ ” she recalls.

Borrowing was indeed easy. Over the next four years, Esther and her husband racked up $95,000 in PLUS loans through the U.S. Department of Education. (These federal college loans are officially called Direct PLUS but are commonly known as Parent PLUS.) When Louise graduated, however, her parents — who say they never got an estimate of what their payments would be — learned their monthly bill would be about $500. That was unaffordable for the Griffins; Esther, 52, works for an insurer; her husband is a chef. After filing to delay repayment, they now owe about $111,000. And the interest on the debt is accruing daily.

“It is my biggest, biggest nightmare and point of stress because I don’t know how we’re going to swing it,” Esther says. (Louise, who graduated in 2017 and has a public service job, separately owes more than $25,000 in loans she took out herself.) “It was the worst mistake I ever made,” Esther says, “and I just wanted to help my child. Now I’m stuck.”

Not just for kids

When people ponder the nation’s more than $1.4 trillion in student debt, they usually focus on men and women in their 20s and 30s, the group most likely to owe money for college. But, increasingly, older generations are affected, too. The percentage of families headed by someone 50 or older with student loan debt more than tripled between 1989 and 2016, from 3.1 percent to 9.6 percent, the AARP Public Policy Institute reports. Since 2004, student loan debt among those 60 and older has grown the fastest of any age group.

Older Americans took on a majority of the debt when returning to school to refresh their skills or change careers. But they also borrowed to assist a child or grandchild. Between 1990 and 2014, the amount of debt taken on by the typical Parent PLUS borrower tripled — from $5,200 up to $16,100, adjusted for inflation — according to the Brookings Institution.

For-profit schools, which often cater to older students, are breeding grounds for debt. In 2016, students graduating from these institutions owed an average of nearly $40,000, compared with the average $28,000 owed by students at all other four-year colleges. Default rates, too, are higher for students at for-profit schools.

Along with student debt, older borrowers often have other financial burdens: younger children still at home, elderly parents needing support, or their own preexisting debt — credit cards, an auto loan or a mortgage. The result? “There is a lot of despair,” says Betsy Mayotte, the president and founder of the Institute of Student Loan Advisors, a nonprofit offering free counseling for people with ­education-related debt. “They feel the burden of knowing they could be 85 years old and still have a student loan payment.”

Kevin and Tonya Bower don’t want that. Over the years, the couple, who live in Kelso, Wash., took on about $75,000 in federal loans to finance their daughter’s college education and their own separate returns to college in their 40s, as they sought to counter the impact of the Great Recession on their careers.

Kevin, 52, feeling professionally limited, took out about $26,000 to earn a bachelor’s degree in business, organizational management and leadership at a public college. The Bowers also took out $26,000 in PLUS loans to send their daughter to the same school, where she received a degree in psychology in 2014. And Tonya, 51, borrowed the rest when, during the recession, she returned to school to get a two-year degree in web and graphic design. (Her customer-service job had been cut, and she’d been moved to a lower-paying, late-shift position as a clerical assistant.)

Kevin, who received his degree in 2010, is now a compliance officer for truck manufacturer Daimler. The Bowers’ daughter works for a local chamber of commerce. And Tonya, who couldn’t find a full-time position that would make use of her degree, is working at a supermarket.

Even now that they've refinanced their loans, Kevin and Tonya’s $700 monthly payments batter their budget. Kevin cut back his 401(k) contributions from 10 percent to 4 percent of his salary. They have put off home repairs and canceled their last vacation, taking a day hike instead. But Kevin, who’s on short-term disability, chooses not to check whether he can put a temporary stop on his loan payments. “I prefer to pay and continue to knock the debt down,” he says.

Adam Looney, a senior fellow at the Brookings Institution, says older people face an extra risk by taking on student debt, whether it is for themselves, a PLUS loan or a cosigned private loan for a child or grandchild. “People who take out loans when they are relatively young have their whole work lives ahead of them,” he says. That’s not true for the older cohort: “You have fewer work years to make up a deficiency,” he says. “When things go wrong, they are more consequential.” 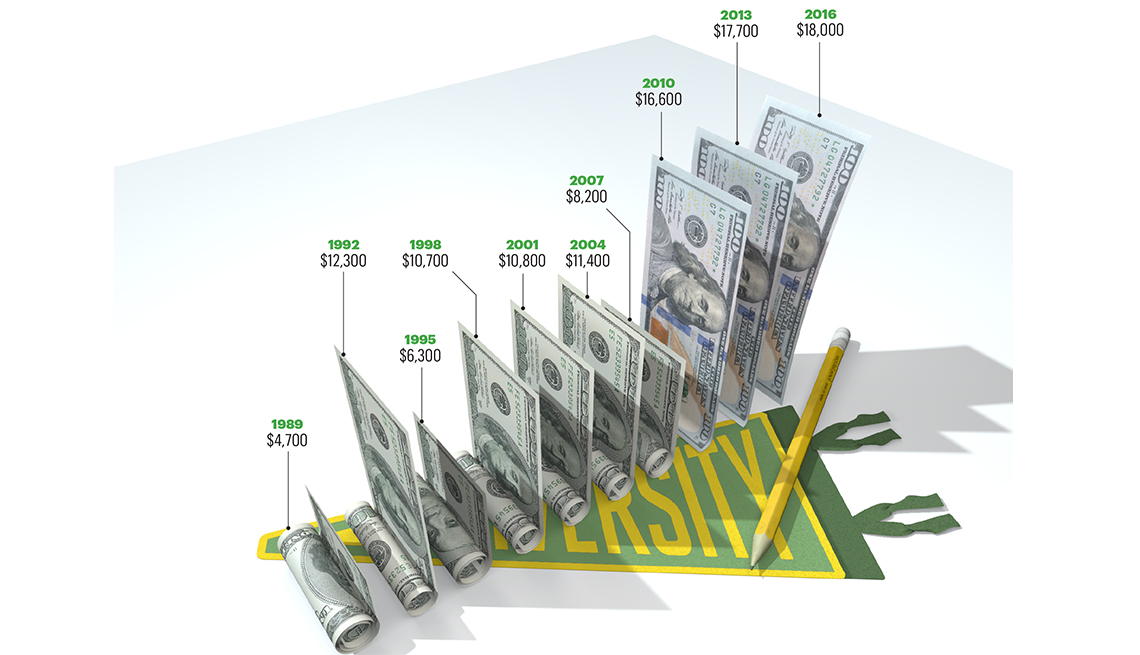 Median student debt of households headed by people 55-64 and owing student loans (all figures in 2016 dollars). Source: Federal Reserve Board

In a worst-case scenario, the government can come after student loan borrowers long after retirement. According to the Government Accountability Office, 114,000 people 50 and older had their Social Security payments garnished in 2015 to repay student debt. A few years earlier, this began happening to Cathie Bell. A retired teacher and former taxicab owner and driver, she’d borrowed about $20,000 in the late 1980s when studying for a master’s degree in education. Now living on Social Security in Portland, Ore., Bell thought her loan was in deferment. But in 2012 she received notice that she was in default and that the government would begin to take $115 a month out of her benefit. Pushed below the poverty line by the garnishment, Bell successfully enrolled in an income-based repayment plan after a year and now pays nothing because her income is so low. Bell, 69, is convinced the debt will be with her for the rest of her life.

It’s easy to say people should be more realistic about what education they can afford, but it’s not that simple. Even cost-conscious families can be overwhelmed by the price of a public university. And no one can predict how a particular degree will pay off. Yes, the Department of Education’s College Scorecard helps a little by showing average salaries for colleges’ alumni 10 years after graduation. The scorecard also includes information about graduation rates and federal debt loads for students. But all those numbers are rough estimates, not guarantees. Additionally, both nonprofit and for-profit schools have been known to stretch the truth with their job-placement statistics.

Hard conversations with children about the financial toll of dream colleges are often easier said than done. Experts flag the PLUS loan program for setting up a particularly pernicious dynamic. While federal guidelines limit dependent undergraduates to $31,000 in government loans, there’s no such limit on the parent program. As long as parents pass a cursory credit history check, they can borrow up to the amount it costs to attend a school, minus financial aid the child receives. At the same time, the income-based repayment option for parents is both complicated and less generous than the government’s parallel program for students.

While there is movement to toughen PLUS lending standards as part of the expected congressional reauthorization of the Higher Education Act, a number of colleges oppose doing so and have repelled such action in the past. In addition, reduced access to PLUS loans could result in replacing one bad option with another: turning to the private market for loans or, even worse, forgoing college attendance altogether. “You certainly don’t want access to quality higher education to become a class issue, and that’s a potential risk,” Mayotte says. And such a move, while useful, would only prevent future borrowers from building up excessive debt, not help those struggling with it currently.

People with student debt from some for-profit universities may be in luck, though. A federal court recently blocked an effort to halt automatic forgiveness of student loan debt for students whose schools closed while they were enrolled or soon after they graduated.

But for now, many of the older Americans who are struggling with student debt need help they aren’t receiving. Esther Griffin, for one, finds herself pulling out her phone to play Givling, an app that awards up to $50,000 to winners of its trivia contests to pay off their student loan bills. She’s yet to win, but she keeps trying. “I’m just praying I’ll get my chance at some point,” Griffin says. “That would be awesome.”

Dealing With Your Debt

If you’re struggling with education debt — either for yourself or for a child — follow these guidelines.

People who have federal student and PLUS loans may be eligible for reduced monthly payments based on income. Companies servicing student loans, however, have been known not to disclose these plans, instead steering borrowers toward deferment, which lets interest accrue and raises the total amount owed. On the government website studentaid.gov, click on How to Repay Your Loans to learn about different plans. Parent PLUS borrowers, for example, might qualify for an income-contingent repayment (ICR) plan. Some parents might also be eligible for the Public Service Loan Forgiveness program.

Avoid services that, in exchange for a fee, promise to negotiate your debt down, or arrange for it to be forgiven altogether. More likely than not, these are fraudulent, according to the Department of Education. If you need help, turn to an established nonprofit financial counseling group, like the National Foundation for Credit Counseling or the Institute of Student Loan Advisors.

3. Consolidate carefully, if at all

Beware of consolidating federal loans into a private loan. Those private loans do not offer income-based repayment plans and may lack certain consumer protections. Also, borrowers with a total and permanent disability may apply to have their federal student loans discharged — an option not always available with private loans.

More on Managing Your Debt

Are You Wasting Your Money?