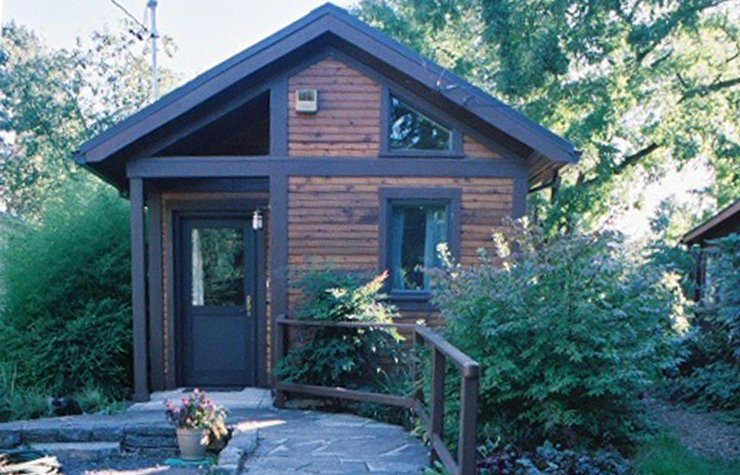 Accessory dwelling units (ADUs) are small, independent housing units created within single-family homes or on their lots. Although these homes are small, in many communities the complexities of building one are a big deal.

On top of zoning constraints and construction costs, some municipalities charge pricey fees that can make the project untenable.

That's no longer the case in Portland, Oregon, which in 2010 significantly reduced (or "waived the largest") municipal fees and adjusted the city's zoning codes to make it easier for a homeowner to add an ADU to his or her property. An overriding reason for the change: to help residents age in place.

An ADU can be located inside the main house (such as with a lower-level apartment) or attached to the house (think of an apartment over the garage). A detached ADU can be a small but full-sized house or a very tiny home — such as those featured the AARP Livable Communities article "Tiny Houses are Becoming a Big Deal" and the slideshow "Take a Tiny Houses Tour."

"Older adults can stay in their neighborhoods," explains Eli Spevak, owner of Orange Splot, a housing development company. "They can maintain their social connections, have access to their support system, be in a familiar environment and live in a home that both meets their needs as they age and is in proximity to the primary dwelling."

As a result of Portland's zoning code change, the allowable size of an ADU increased to 75 percent of the size of the main property or no larger than 800 square feet.

Before 2010, Portland homeowners wanting to create an ADU were subject to $10,000 or more in System Development Charges — to cover city services including water, parks and transportation. The city has suspended those charges until 2016.

Homeowners are using ADUs in a variety of ways.

For instance, one of the more common scenarios that Spevak hears of is an older couple building an ADU to retire into while renting out the main house for income. An ADU can also be put to work as the rental, thus providing extra income so the retiree can afford to remain in his or her home. In other scenarios, the ADU serves as a residence for a homeowner's elderly parents.

Because an ADU is typically part of the same property as the main home, they can't be bought or sold separately.

While the reduction in fees has been absorbed by the city, Portland continues to receive revenue from building permits and other payments still required by the construction.

The cost of building ADUs is borne by the property owner. Despite the fee waiver, ADUs remain expensive to build, says Alan DeLaTorre, a researcher at Portland State University: "Homeowners still need to pay for the costs of building a secondary dwelling, including materials and hiring people to carry out the design and the construction."

About 10 times as many ADUs are now built each year in Portland as compared to before the city changed its fees and zoning rules. The change has even inspired some niche tourism, with bike tours taking cyclists on visits to the most innovative units, introducing the concept to anyone who's curious.

As builder Spevak notes: "If you've toured an ADU, you'll be more likely to build an ADU."