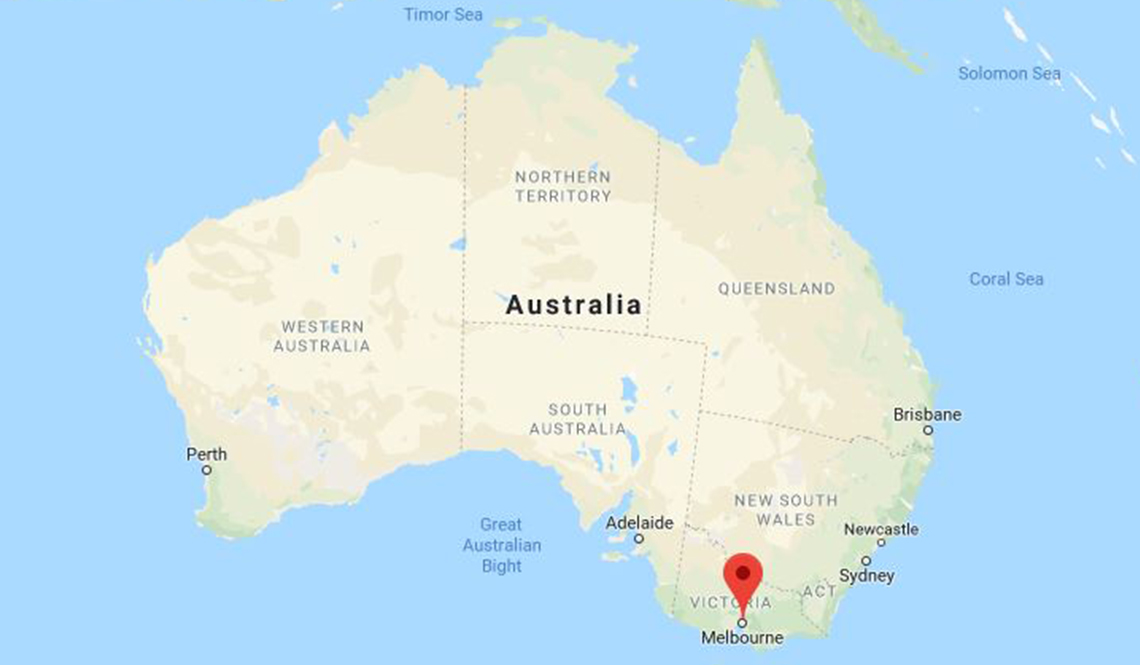 Located in Victoria, one of Australia's six states, Melbourne is both a city and an expansive metropolitan area consisting of 31 municipalities. "Melbournians” make up about 20 percent of Australia's 25 million residents.

Don't miss "8 Livable Lessons From Down Under" at the end of this article.

When movie star Ava Gardner landed in Melbourne to film On the Beach — a 1959 movie about the last people living after a nuclear war — she reputedly said, “What a great place to film a movie about the end of the world.” Indeed, filmmakers were startled at how easy it was to replicate a downtown devoid of human activity.

Visiting two decades later, Danish architect Jan Gehl remembers, “how utterly dead Melbourne was and how boring the whole place was." Fast forward a few decades and Gehl, the author of Cities for People, says "Melbourne has this fantastic status as being one of the world’s most livable cities.”

Melbourne has been named “the best city to live in the world” for seven years running by The Economist magazine’s data-crunching Intelligence Unit. (In 2018, Vienna, Austria, bumped the city to second place). Once considered Australia’s Rust Belt, Melbourne — population 4.8 million — has become one of the fastest growing cities in the developed world, with thickets of construction cranes dotting the skyline and flocks of foreign visitors strolling its streets. 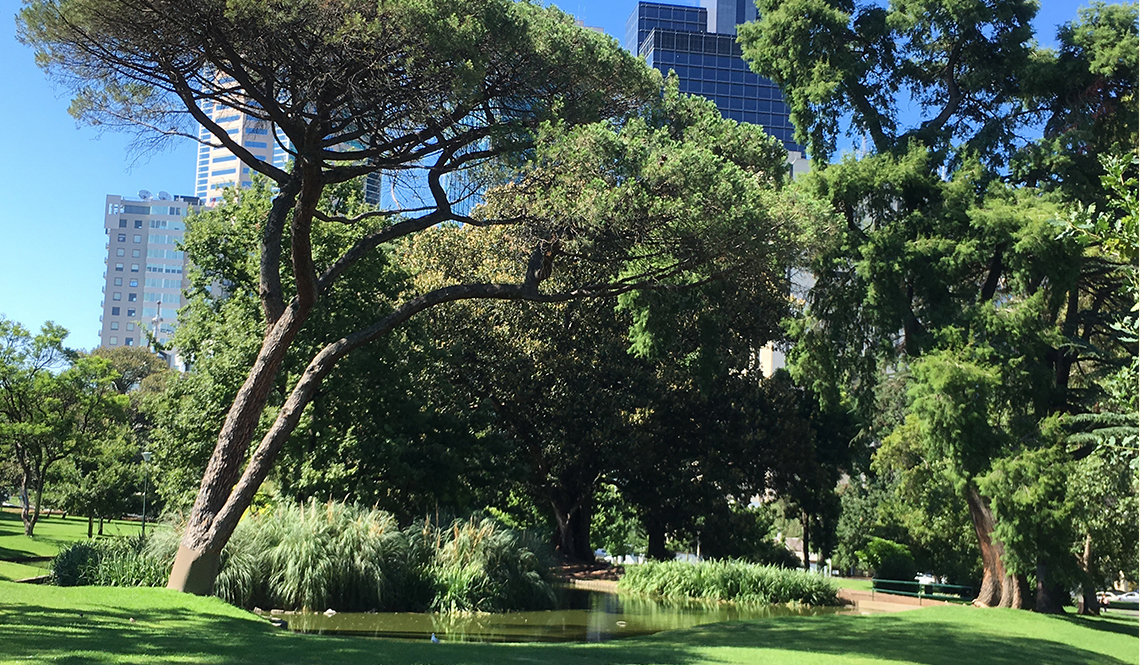 The World is a Classroom

Melbourne is not unlike many U.S. cities. Neither a historical treasure like Paris nor a place of scenic beauty like Sydney, its neighbor 550 miles to the northeast, Melbourne's growth was influenced by cars, suburbs, freeways, malls, franchise stores, free market economic policies, high rates of home ownership and endless tracts of land available for real estate development.

“It was decided to pull out the stops to invite people to walk,” Gehl explains in Cities for People, lauding Melbourne’s wider sidewalks, plentiful benches and the transformation of drab alleyways into a down-under version of Italian piazzas. 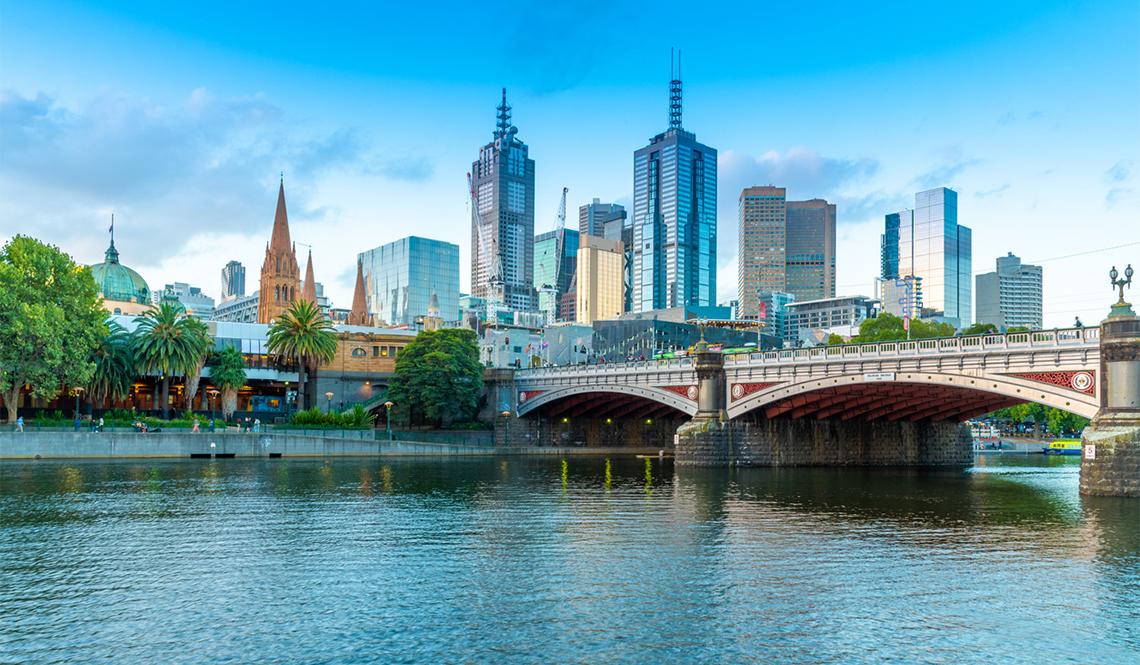 A view of the Yarra River and downtown Melbourne, Australia

The Heart of Town

Melbourne’s commitment to creating a more livable community continues. When I visited the city in 2018, I was surprised to learn that Swanston Street — my favorite walking route through town — wasn't always a charming promenade. In fact, it was considered one of the most unpleasant spots downtown until 2012, when car lanes were narrowed to accommodate ample sidewalks. Today, it’s an urban wonderland where pedestrians are treated to whimsical public art, historic architecture, cheery street singers, flower vendors, a plaza with an open air café, and a lively selection of shops.

The Swanston scene is anchored on the north by the Victoria State Library (where people of all ages come to relax on the front lawn) and on the south by Federation Square (a central gathering place that hosts cafés, cinemas, an art museum, theater and the ever-busy tourist office). The square was built in 2002, replacing a widely hated 1960s office building.

The walkways along the Yarra River are another bustling attraction, lined on both banks by sidewalk eateries, art galleries and a sweep of parkland leading to the Royal Botanic Gardens, a favorite spot for picnics beneath palm trees since 1846. A 20-acre stretch of riverside greenery known as Birrarung Marr (“river of mists” in a local Aboriginal language) was reclaimed from railyards and roadways in 2002 and turned into a park.

Melbourne shines as an example of how cities can be retrofitted with the kind of beloved public spaces and streetlife associated with historic urban design. But Melbourne’s motive is not nostalgia. Asserts Gehl: “Contemporary cities with solid economies recognize the importance of pedestrian traffic and bicyclists for sustainability and health.” 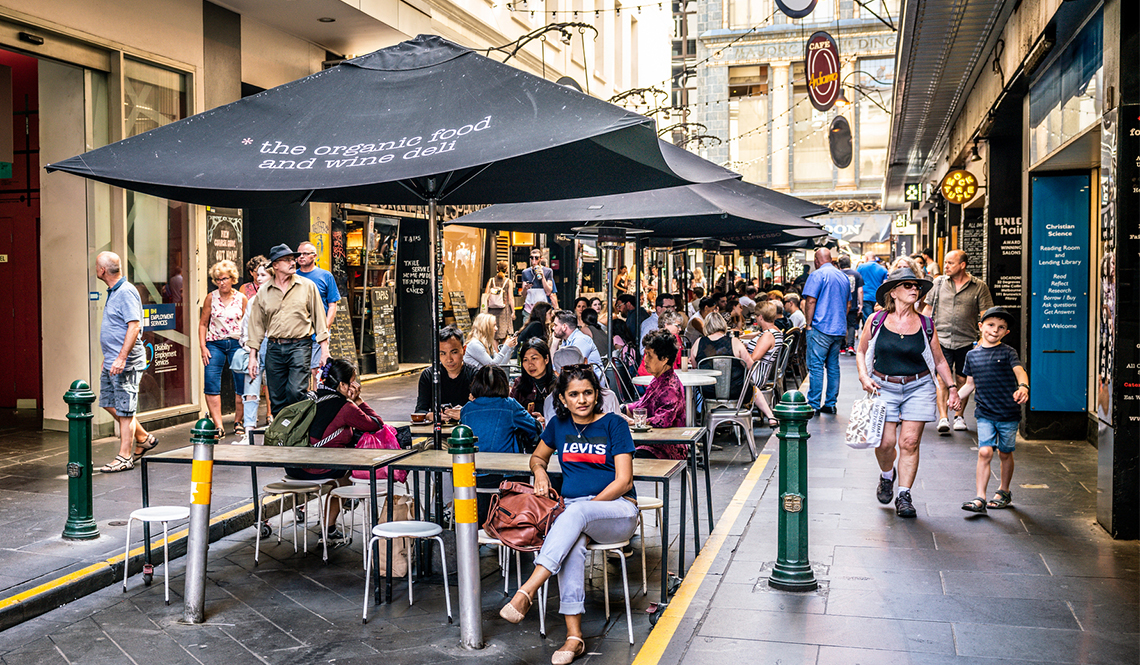 Degraves Street is a vibrant pedestrian walkway and café destination.

The convivial feel of central Melbourne is matched in many of its neighborhoods, which are served by the region’s extensive network of 24 streetcar lines and 15 commuter rail routes. The suburban communities, many of which were slipping into economic decline in the 1990s, are now enjoying a full-scale revival, writes sociologist John Carroll in his 2017 book Land of the Golden Cities.

Moonee Valley resident Wazila Khan, who is in her 60s, is an American expat. “I have low vision and when I lived in Knoxville, Tennessee, it was difficult for me to get places," she told me. "So when we moved to Melbourne I chose a neighborhood that has everything within an easy walk or public transit. When I told my sister, who lives on Long Island [New York], about where I live, she said I was fibbing.” 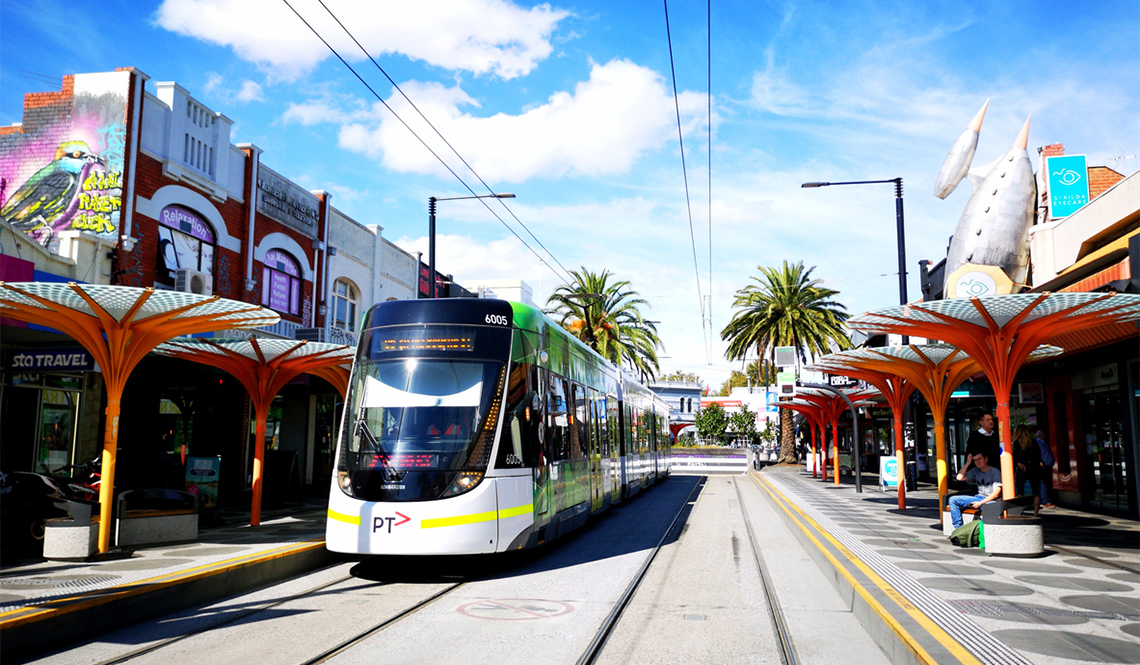 Most of the new subdivisions sprouting on the outskirts of Melbourne closely resembles America's suburbs: large single-family houses with attached garages and deep lawns front snake-like residential streets that empty onto four-lane commercial highways. While the center of Melbourne feels like cozy Copenhagen, the surrounding landscape looks like sprawling Houston.

A 21st century reinvention of the strip mall on a busy intersection in Point Cook now has townhouses, a supermarket, church, child care center, bakery, brew pub, yoga studio, medical clinic and a small office building. Called Soho Village, the development has attracted both Millennials and boomers, says project architect Dean Landy of ClarkeHopkinsClarke. “They're both drawn to having shops and services at their doorstep. The boomers like the idea of an urban village rather than a retirement village.”

This approach to home-building also addresses one of the Melbourne region’s biggest problems — housing affordability. Prices are soaring, in part because the size of an average suburban home has doubled in recent years.

“That’s because many of the amenities that used to occur in the heart of the neighborhood are now internalized within the house,” Day says. He and his team, working with forward-looking urban developers, aim “to raise people’s awareness of the economic value of buying a more modest house if it's within walking distance to parks, cafés and shops where you want to spend time.

"I used to get laughed out of boardrooms when I talked about walkable communities," Day shares. "Now we can show clients there is an economic advantage.”

8 Livable Lessons From Down Under

More than 200 acres of roadways and other underused infrastructure in the central business district have been converted into sidewalk space and plazas, Rob Adams, Melbourne’s longtime director of city design, tells the Sydney Morning Herald. Didn’t that spark a backlash from motorists? No, he says, because it was done incrementally over 35 years. Today, two-thirds of all trips in central Melbourne are made on foot.

2. Make the Downtown an Attractive Place to Live

Barely 1,000 people lived in the central business district in the 1980s. By 2002, the population surged to 10,000 and now stands around 135,000. Easing zoning restrictions for apartments in historic buildings — and attracting students (who now comprise 40 percent of the area’s residents) — got the ball rolling. Continuing livability improvements entice more folks to move in.

Only two sidewalk cafés could be found downtown in 1985. By 2019 there were more than 500 sidewalk cafés animating the city’s street life. Described for decades as an "empty doughnut hole," the central business district has become Melbourne’s sweet center with 1,200 restaurants, 60-something pubs, more than 50 nightclubs and numerous sports and entertainment attractions.

Dozens of alleys — once viewed as sketchy places populated chiefly by trash dumpsters and delivery vans — have morphed into popular hangouts. Some resemble outdoor art galleries, food courts or artisan quarters. (An alley near Federation Square celebrates local rock legends AC/DC.) Many new buildings now incorporate "laneways," as alleys are called in Australia, into their designs.

Barely noticeable features sometimes make all the difference in whether a place is experienced as dismal or dynamic. Blank walls on buildings or barren blocks of parking lots suck the life out of a street. That’s why Melbourne requires the ground level of all buildings facing sidewalks to consist of at least 75 percent windows or other pedestrian-friendly elements.

Melbourne was rare among modern cities in not scrapping its streetcars and commuter rail service decades ago. The benefits of efficient transit reach throughout the metropolitan region. Fares are free before 7 a.m. on weekdays, which saves the city up to $10 million in costs by being able to reduce rush hour service. Trains and buses run all night on weekends.

Parks function as backyards for downtown dwellers. The revival of Melbourne’s central business district would have sputtered without green spaces where people of all ages can walk, sit, play, mingle and lounge. Building on the wealth of shaded 19th century parks that border the center city, new greenways and plazas have been added for public enjoyment.

Make no little plans. That advice from Daniel Burnham, a visionary Chicago-based architect and planner during the late 1800s, has inspired planners for a century. But based on 35 years of Melbourne’s makeover, Rob Adams, the city's planner, observes that "it's the small things that makes streets livable.”

While acknowledging the importance of creating Federation Square from scratch, Adams also points to Swanston Street where “we doubled the number of pedestrians simply by widening the footpath [Australian for sidewalk] and planting a few trees. Any city can do that.”

“This is not a story of heroic leadership nor of grand projects so much as many stories of many agents and projects working together,” declares Adams in Urban Choreography: Central Melbourne 1985. “What really counts are the slow, incremental transformations over the long term.”

A Bonus Lesson: Learn Why Men in the U.S. Are Gathering in Aussie-Style "Sheds"

Jay Walljasper is a Minnesota-based journalist and author of The Great Neighborhood Book. He writes, speaks and consults about livable communities.