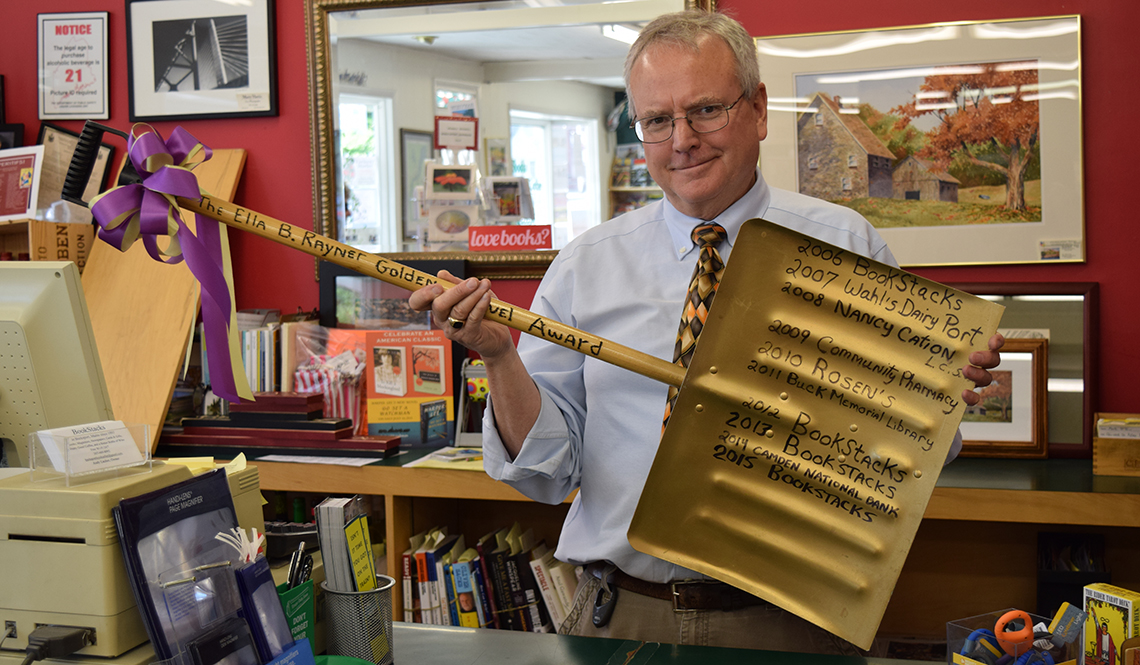 Photo by Charles Eichacker for The Ellsworth American

Bucksport’s Golden Shovel Award is given to the business that does the best job of keeping its sidewalks free of snow. BookStacks owner Andy Lacher (pictured in 2015) is a repeat winner. The runner up, Camden National Bank, received a slightly smaller shovel.

Getting around can be tough during a long Maine winter. And it's especially tough for older adults, of which Maine — with a median age of 44 — has many.

In the small town of Bucksport (population: 5,500), 20 percent of the residents are age 62 or older. Of this group, roughly 11 percent live alone and many don't drive. They have no desire to move away because they’ve lived in the town for all or most of their lives. Many worked for the paper mill that fueled the local economy until it closed in 2014 after nearly a century in operation.

Much of the advocacy work and accompanying services available to older adults in the Bucksport region are part of Thriving in Place, an effort by the grassroots, largely volunteer Bucksport Bay Healthy Communities Coalition, which serves the towns of Bucksport, Orland, Verona Island and Prospect (total population: 8,900) and works with 15 partner organizations as well as local governments, various nonprofits and volunteers.

Winter mobility is a pressing concern.

"The day or two after the snowstorm, I couldn’t get to the pharmacy. I couldn't get to the post office. I mean, that didn’t seem like an extreme thing to ask. Those [snow] banks come up, and my legs don't work like they used to."

— Pearl Swenson, a resident of Bucksport, Maine, before the town council

In many communities, sidewalk care and snow shoveling is the responsibility of the home or business adjacent to the sidewalk. In downtown Bucksport, where many storefronts are empty, the sidewalks are a town duty.

The council and town manager responded to Pearl Swenson's concerns with both short- and longer-term solutions. A part-time worker was hired and assigned to shovel downtown sidewalks. The city also shaved down the concrete edges of several sidewalks, notes the local paper, The Ellsworth American, "making it easier for pedestrians to shuffle onto them when a slick layer of ice renders normal footsteps difficult."

Several Bucksport businesses do shovel the sidewalks outside their doors, partly because it’s good for business and partly because they could win the coalition's annual Ella B. Rayner Golden Shovel Award, named after a longtime Bucksport resident who was a community advocate for pedestrian safety.

The full-size, golden-colored snow shovel is presented to a business that does a particularly good job of keeping its sidewalks clear. (See the photo celebrating BookStacks, a bookstore/wine shop that's a repeat champion.) The winner's name is written on the shovel in a black permanent marker. Much like Miss America's tiara, the golden shovel is handed down to the following year's champion — when there is one. Due to a lack of snow in 2016, the competition wasn't even held. When winter came roaring back in 2017, the offices of Bucksport Heart & Soul, a community group, earned the shovel.

As James Bradney, the former health planning director for the Bucksport coalition, wrote in a 2015 article: "We listened to what seniors were saying — to the things that were important to them in order to stay healthy, safe, and happy as they age in their homes."

This article is adapted from the "Transit, Streets and Sidewalks" chapter of the AARP book Where We Live: Communities for All Ages — 100+ Inspiring Ideas From America’s Community Leaders. Download or order your free copy.